In our latest interview, we talk to the very unique band Delhi 2 Dublin. This band, which sprouted from Vancouver, Canada, invented their own sound which they call “celtic punjabi electronica”. Confused? Well, we were too, but give them a listen and then you’ll see that it all makes sense. We chat to Tarun Nayar, who plays the tabla and electronics. 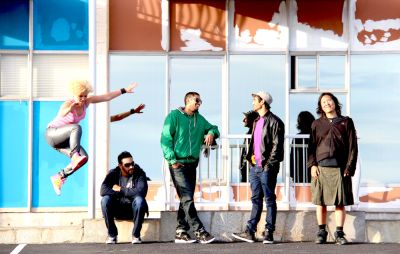 S] How has your writing progressed over the time you’ve been together?

T] “We’ve gone from a very ‘hip-hop’ style of writing – me coming up with a catchy groove and a feel, and Sanj our singer, messing around and coming up with some catchy vocal bits and melodies – to a more ‘song-writery’ approach. Now we like to sit around in the studio together, three or four of us, and just really try and create a vibe together. This can take a bit longer, but it much better represents the sound of the band…”

S] Are there plans for a UK tour?

T] “Yes! Apparently we’ll be there at the end of August. We came a couple of years ago and it was a lot of fun.”

S] What are the biggest challenges for you all as a collective?

T] “Keeping everyone positive, motivated, rested, and healthy – that’s not easy with five of us on the road for about 200 days every year. We try and keep communication lines open, and really work to support one and other. It’s easy when the shows are great, but when you’re playing to five people in Iowa City on a Tuesday, it’s a little harder.”

S] What projects are you looking forward to in 2013?

T] “We’re really looking forward to our US tour in Feb and March. It’s like a month and a half and we really play all over the States. We get to play a bunch of shows with Balkan Beat Box too, which is super-rad.”

S] On a lighter note, what inspired the artwork of the skull with the colours and the headphones as well?

T] “I took a trip down to Sayulita, Mexico last winter – a quick getaway to try and take some space from the album – and fell in love with a little artist boutique there called Revolucion Del Sueno [dream revolution]. Their approach to blending traditional Mexican folk art with a contemporary edge struck a chord. It’s kind of like what we do with our music, so I approached a fantastic Latin American graffiti artist in Vancouver, Dedos, and asked him if he could bring that approach to our album art, with an Indian twist. He did it in like two days. He’s a freaking genius!”

S] Is there a song that you’re working on right now that you feel like best defines your sound at present?

T] “We haven’t really written a whole lot since the album, it’s been tour tour tour, but we’re on a break at the moment, so I’ll probably start sketching out stuff pretty soon.”

S] What kind of of places and experiences are inspiring the band right now?

T] “Bali is always a big influence for us – we’ve played the bali spirit fest a couple of times now, and the way of life and vibe of that island is really, really special. We named one of our songs ‘Bali High’ cause it really came out of one of our trips there. We’re also really influenced by Vancouver, mostly east Vancouver. It’s one of my favourite spots on earth – such a great blend of cultures, music, great food and art everywhere. It’s a little rough around the edges, but a constant source of creative inspiration.”

S] How are you looking back on Turn Up The Stereo as a whole record now that it’s out in the world?

T] “We love it! It’s weird to still really love our album after it comes out, that’s unusual for us. Even months after the Canadian release of the album, we’ll still get high after shows, sit in the tour van, and crank ‘Lighta’!”