In our latest spotlight interview, we chat to former Grammatics man Owen Brinley about his latest project, Department M. 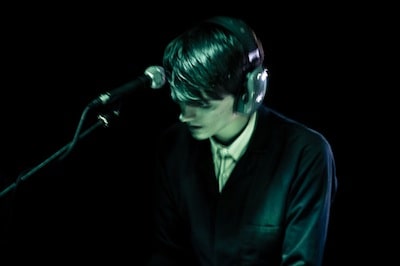 S] Where did the idea for Department M first form?

OB] “I’d been dying to do something new, free from the restraints of Grammatics idiosyncrasies for some time. I began writing Department M songs before we even split up but it was clear these tracks could never be Grammatics songs. When the realisation hit that the band simply couldn’t continue, out of the initial shock came a great excitement that I could finally do exactly what I wanted without having to convince the rest of the band of its merits. That sense of freedom proved instantly inspiring and I soon had quite a number of new tracks. James Kenosha [Grammatics’ producer] asked me what I was doing shortly after our final gig and suggested we just start recording whatever material I had, finished or not. We just threw ourselves into it without over-thinking things this time.”

S] How is the inspiration different to your previous projects?

OB] “Well, my recent experiences have been very different. I usually subliminally write about what is troubling me at that point or write about my current fascinations in art or literature or whatever but those things have moved on with time. With Grammatics, I was younger and in a more fragile place so the music has a great vulnerability, something I was keen to avoid this time. I wanted the music to have spirit and, for want of a better phrase, balls. I think there’s more of an arrogance and sense of vengefulness about the Department M material , instead of trying to make everything beautiful and sad I wanted to explore the other things that making music makes me feel.”

S] Why have you chosen to focus more on electronic stuff with Department M?

OB] “A factor was that I play guitar in a very stylised way that I became really sick of. It was keeping me from writing anything new that exited me. I bought a Roland Juno-60 synthesizer from a friend a few years back, that is basically the sound of the Department M album. Putting down the guitar and writing on an instrument I had less knowledge of had me playing things that felt inspiring again. I have always made music with electronic elements but having that instrument to hand made me want to bring them to the forefront.”

S] Talk us through ‘pHARMACY’ and what that track means to you?

OB] “Well, it’s hard to really go into the lyrics and give you a solid meaning with a lot of my stuff but in all honesty, ‘pHARMACY’ was influenced by experiences of being on prescription medication and the related anxieties of not really feeling in control of your own head space. There’s a kind of euphoria and anxiety juxtaposition going on within the track; with some of the sounds, the lyrics and vocals. I suppose ‘pHARMACY’ is evocative of my life at that point. Things were exciting and there was a great sense of possibility because I was coming up with new music but I also had some pretty terrifying anxiety problems at that time.”

S] Is it a good indication as to how other Department M stuff will sound?

OB] “Yes and no. There are other melodic synthesizer-based tracks with choruses but there’s also much heavier noise-based tracks that make up the crux of the current live show. There’s some real ear-bleeding moments.”

S] How was it working with James Kenosha in Bridlington?

OB] “It’s always a great pleasure, but it was super-cool this time as we could do whatever we wanted, there was no expectation whatsoever. No record label to tell you to take the distortion off the vocals, so we had a lot of fun seeing how far we could push things. The songs weren’t very developed in some cases so we’d just try a few things out, see how silly we could make it. In a way, I suppose that’s the ultimate studio experience. With a band you have three, four, five people all with different agendas that need satisfying, everything can become compromised. I’d spent so many years in studios with different bands dreaming of a time when I could finally record what the fu** I wanted and this was finally it.”

S] What is your involvement with Stalking Horse?

OB] “It’s changed slightly over the last year and a half but creatively it’s still 100% Wu’s project. I started out just playing guitar in the live incarnation of the band but I recently recorded and produced a forthcoming track for Stalking Horse too. I suppose it’s ever-evolving. We have a collective of local musicians called Role Model Corporate that bands like Stalking Horse, These Monsters, Department M, Dolphins, Black Moth and Pulled Apart By Horses are involved in, among others. We help each other out in whatever ways we can, be it being in each other’s bands, designing and printing artwork, lending gear to each other etc. Whatever we can do to make it easier for each other.”

S] What are the plans for that project?

OB] “Stalking Horse just recorded a cover of The Beach Boys’ ‘Morning Christmas’ with Whiskas of Forward Russia for the Christmas Anthologies compilation album. Further than that, I’m not so sure. Wu just finished a great music video for ’99 Stairs’ so, keep a lookout for that.”

S] What do you think of York and Leeds’ respective music scenes, at present?

OB] “I really don’t know, it’s hard to say how well a scene is doing at the time, isn’t it? It’s a lot easier make a judgement retrospectively. The thing I love about the Leeds scene is the sense of community, bands are good to each other and will do what they can for each other. It makes life so much easier to be in a support network of bands. In regard to York, well, I haven’t been around so much since the days of Grammar so it’s impossible to say.”

S] Are there any bands in-particular who are inspiring you most at present?

OB] “Chromatics’ album ‘Kill For Love’ was the last album I was really into. They manage to sound cold but also very deep at the same time which I love. I’m not sure I get inspired by bands per-se. I get more inspired when I stumble upon sounds that don’t sound so familiar and feel new to me in some way. To me inspiration is deciding to put some music on the stereo but then realising there’s nothing that fits the exact mood you’re looking for. It’s like there’s an area that isn’t covered and you then have the opportunity to make a piece of music that covers that void.”

S] How do you feel like you’ve progressed professionally and personally through the music that you’ve made over the years?

OB] “You’re making me sound like some kind of heritage act here! That’s a pretty huge question. Personally, I’d like to think I’ve loosened up and relaxed quite a bit. I was probably just too intense and angry back in the day and that led to being wildly inconsistent person, always grappling for control of things. As a musician you rarely have control of many aspects of your life, mainly due to lack of money and you have to learn to accept that.

I think the main thing I’ve learned is that you can care too much, can try too hard. If you put 100% into something during every waking hour you eventually send yourself insane and the music isn’t always benefactor of that. I’m finding that music flows easier if I sweat over it a bit less. ‘Perfectionist’ is an accusation I’ve had levelled at me in the past, but that’s something I don’t want to be as true perfection is imperfect. Learning to let go and just let things swing a bit more is a road I want to go down. I’m sure that way of thinking is certainly more conducive to being a happy person.”

OB] “I may learn to like it in say, ten years when it has some kind of kitsch value but I’m not so hot on it right now. I don’t listen to Grammatics recordings any more but in my mind it’s like they’re going through some kind of awkward teenage phase. I don’t want that to put anyone off, but I always try to be honest about stuff when asked a question. I don’t think that’s an unusual way to feel about things you’ve done in the past.”

S] That material touched a lot of people in different ways; do you miss performing particular Grammatics’ songs, ever?

S] What about Colour Of Fire?

OB] “The French girls. The hotels.”

S] A random question now, looking back to the start of your career, is there anything you’d have done differently, and why?

OB] “Well, yes, everything because I put the records on once a year and most of them aren’t any good. I’d rather have made brilliant records but I suppose that’s just the nature of developing into a, hopefully, decent songwriter, isn’t it? You have to really mess things up to get them right in the future. Making mistakes gives you the desire to improve because there is no worse feeling than releasing an album you don’t think is good enough. People say they have ”no regrets”, but fu** that. If you have failed at something you should take the burn and regret it, that way you’ll learn and the next time ensure you prevail. If there was a mistake to be made, I think Colour Of Fire probably made it. That’s not to say it wasn’t a lot of fun, and another person may have a whole different perspective on the music we made. I look back on those days with fondness of the great experiences we had on the road in Europe and Japan but also with regret, as I really did not have a fu**ing clue what I was doing.”

OB] “Well, it’s very early days at present but I’d love to have the album out and be touring soon. I’d also like Department M to be as much of a design project as a musical one. My good friends Tommy Davidson and Ben Holden helped me realise the design and screen print of the ‘pHARMACY’ artwork and I’m really exited to do more work in that vein.” 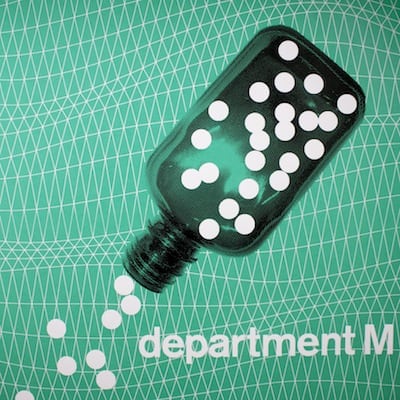