Divine Sinn have been making waves in the Yorkshire scene for many months now, with a recent high-profile performance at the East Riding Rock Festival and supporting established acts like Systemyk and Sworn Amongst. This Driffield-based five-piece have all the tools to make a name for themselves on a national scale over the course of this year. The band is: Carl (bass), Nick (drums), Lee (guitar), Tom (vocals) and Benji (guitar/backing vocals). We caught up with them before a live gig in Hull to talk about their experiences thus far, and how their sound will progress and develop in the future. 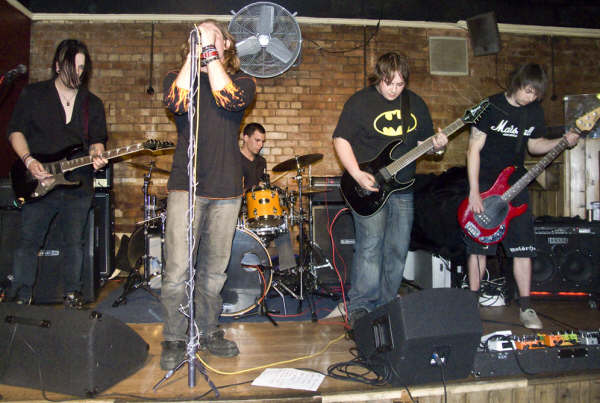 ‘Some of us are daydreamers, but we try to make our dreams a reality’

S] Your sound is a little different to the current crop of music coming out of Hull at the moment, it’s got a very prog-rock/Industrial feel to it – so what inspired you to root your sound within those genres?

Lee] I think that comes from me and Benji writing a lot of the songs. His musical taste is very much based within the Industrial and EBM genres and I am more into metal, it brings so many different influences and ideas into our sound when we write.

Benji] Every member is from a different background when it comes to musical influences. I mean there’s myself with the Industrial, Lee with his metal, Carl is into more classic stuff like Metallica and Nick has his jazz while Tom loves pretty much everything. It’s a mixture of what we all enjoy brought together as one sound.

S] You are based in Driffield, as far as we are aware that’s not really a musical hotbed – tell us about it?

Lee] Actually it used to be. There was The Slaughterhouse studios there, but it burned down. They had The Happy Mondays record there, and The Sisters of Mercy. It’s got a surprisingly vibrant gig scene.

S] Does the area inspire your lyrics at all?

Lee] There is actually one song that’s about a normal night out for our band in Driffield. It’s from our first album ‘Redemption’ and it’s called ‘Funky-Punky-Spunky-Munky’. It’s just about getting wrecked together and experiencing the aftermath. (laughs)

Benji] I think a lot of our songs show how far we have come now, and how we have moved away from being just another band from Driffield. I think we are all really grateful for what the place has done for us and everything, because it gave us our first gig but nowadays we feel like we’ve outgrown our welcome. A lot of the songs are there to get back at the people who doubted us.

S] You are just releasing a new EP, and your new album ‘Deadly Sins’ is on the way – Can you tell us about how the themes on your next album show a progression away from those dealt with on ‘Redemption’?

Lee] We wanted to do a concept album based around the seven deadly sins idea at first, and so we’d have seven songs to represent each sin but we wanted to swap the idea and do something a lot bigger.

Tom] Yeah, that idea basically outgrew itself, we said that seven songs was too little, we wanted to do thirteen or fourteen tracks. We decided that we would still have seven songs on the album loosely based around that idea and then we could add to it within the other songs. On the new album, certain tracks just complement each other and they work really well together. It’s been such a long process though. It’s been four months of pure recording and we are refusing to release it until we get it right. We are not going to release garbage, I mean we have re-recorded the thing twice. We would rather produce something that we like and hopefully others will like it too.

S] What do you guys draw from when you write – we are curious about one particular track called ‘Angel’s Eyes’?

Tom] It’s about an ex-long-term girlfriend and she hates it. I don’t like to go into it but it’s a deep and meaningful track about her, and when she found out about it, that was it. Before that song came into fruition I text the lyrics to her and it didn’t go very well for me.

S] Do you all have input on the songwriting process?

Tom] Generally Lee and Benji come up with the riffs and the general structure and then I work on the lyrics afterwards.

Benji] It all starts out with a midi for me and Lee and we write through that and get songs together. From there, we can change bits, take it to the rest of the guys and they can put their stuff in. That’s how every song we have worked on has been written apart from ‘Angel’s Eyes’ actually. That song was written with us altogether whilst in a barn! Also, Ben can be credited with the ‘Sinsation’ lyrics and that’s very much about his strange little world. (laughs) 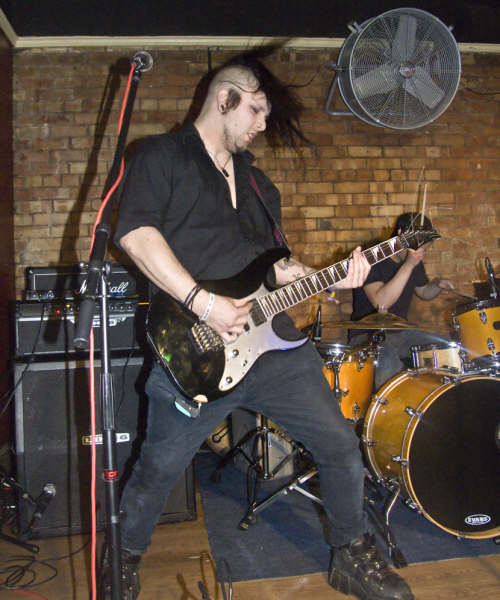 S] What do you think of Hull’s music scene at the minute?

Tom] People have time to come and see you here. In certain cities they are not willing to come out and see a new band. We have picked this up from being on Myspace. A lot of people are searching on there for Hull-based bands and they are messaging us and saying, ‘we like your stuff and we’ll come down and see you.’ Our manager Waitsey gets a lot of attention coming our way from that. I mean, a good example of this idea is that, we did a gig in Leeds recently, and we ended up getting it broadcast on a local radio station but nobody came. If you do something like that around here people are going to flock. I mean we have KCFM and when local bands get played on there, people are really listening.

Carl] Yeah, in Hull we have a lot of great local bands here. We have Systemyk and then the likes of Infernal Creation, Ravenage and Heat-Ray. I mean these bands are really helping the scene. Whenever we play here now, we feel like we are playing with friends.

S] You have had some great moments together, do you have a defining one?

Tom] For me, it was the first time I walked on stage and we just went for it. To see the way that the crowd reacted for the first gig we ever did, they went crazy after just listening to the stuff we had put up on Myspace, that was amazing and I just thought to myself, ‘this is it.’

Lee] Yeah for me, it was the time we played in Driffield and I think it was our third show, we were performing our last song and a mosh-pit started. The highlight for me so far has been the fact that a guy actually broke his arm in our mosh-pit!

Benji] For me it was a few weeks ago now at Metieval (East Riding Rock Festival) and we were on stage and I just thought, ‘this is what I want to do now,’ it really was a great feeling.

S] You guys have some big ideas, so how do you want to expand the visual side of Divine Sinn this year?

Tom] We are still working on next week! (laughs)

Lee] Once we’ve got the album out we’re going to try and get a tour going and get some kind of lighting rig, and something to make us stand out more. We have a big gig in September in Manchester, and it’s a battle of the bands sort of thing, but the winner gets to play in New York and there’s a chance to play a 1,000 capacity venue so we are hoping that’s going to promote us more.

Tom] Some of us are daydreamers, but we try to make our dreams a reality. We’ve seen a lot of bands live and we want to replicate that but in our own way, we don’t like copycatting. We think, we want and then we try and do it.

S] So when will you be touring?

Lee] I think the first plan is to get the album finished and then we will start looking at a full UK tour around September time and towards the end of the year. We are going to try and go to as many places as possible as a new band. We want to get as many fans involved as possible.

Lee] There would have to be some kind of epic thunderstorm going on to really create a mood!

Tom] Actually, I have put together loads of different World War One footage, and put it to a song of ours called ‘Worlds Apart’ and one day I would like to cut it up and splice us in. We would have some black and white grainy images of all these horrific things going on and then us dressed up and right in there performing. Having said that, I have a lot of respect for simple videos where bands are just in a room and showing what they are made of right there. The Pantera video for ‘I’m Broken’ is a great example of that and it shows that you don’t have to hide behind any gimmicks, but it would be nice to have some!

S] In the event of a zombie outbreak, what weapon would you use to defend yourselves with?

Tom] The BFG! That’s the only guy you need. Or I would use a rail gun.

Benji] A knife and fork.

Lee] I saw a trailer recently for a game called Dead Rising II and the guy gets a big pole and attaches a chainsaw to either end and waves it around, I could definitely do with that.

Nick] I would probably use Lee! (laughs) 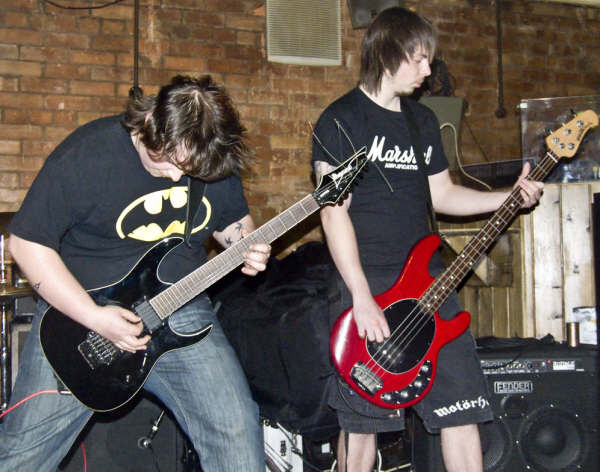 Check out a video for ‘Worlds Apart’ below: