Doctor Phineas Waldolf Steel is an intriguing bloke. His steampunk image, creative sounds and radical ideas have afforded him quite the reputation as an entertainer Stateside. Recently we had an opportunity to chat with the so-called “madman” and talk about his inspirations and the future in his quest for world domination with the help of his now global army of toy soldiers. Believe the hype. 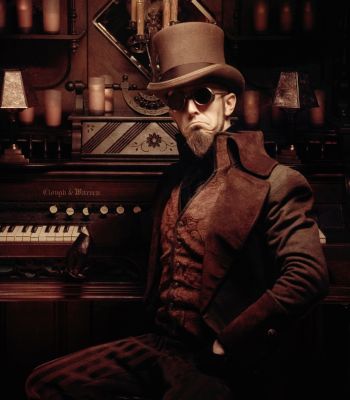 “I am looking forward to seeing my Utopian Playland”

S] If you could share your message and your music with one other person over dinner who would it be and what would you feed them?

DS] Perhaps Bill Gates, with whom I would share not only my music but many of my plans for a world make-over…only after feeding him mind-control cookies.

S] What are you most looking forward to about the possibility of touring the UK?

DS] I have a great deal of very supportive members of my Army of Toy Soldiers residing in the United Kingdom and across Europe. I am very much looking forward to my visits to this part of the globe, so that I may join forces with the creative minds that have helped to keep the UK divisions running so well.

Other than being able to showcase my work across Britain and beyond, I would be honoured to have the opportunity to provide my diligent supporters with great amounts of creative entertainment. I am working diligently to make that happen in the not too distant future.

S] What does steampunk mean to you now in 2009 and how do you see it influencing the world in the future?

DS] This emergence of steampunk is wonderful. To see a movement based exclusively on visual aesthetics of this kind is grand. Modern design is often focused on function over form, ignoring the artistry of yesteryear. Much of today’s architecture and city planning is truly horrendous and unappealing to the eye. There’s a reason that people still travel to Europe in order to look at a cathedral…there’s something inspiring about these old designs, bursting with the talent of those who designed them.

To see a return to these sensibilities, coupled with the adaptation of modern technology is the voice of a generation calling out for a world make-over. There is a swell of understanding that creativity can and will be implemented in every aspect of our lives. I am very much looking forward to seeing such a manifestation of a Utopian Playland.

S] How will your music and message develop over the coming year?

DS] The most important element of my work is the message; to embrace and actively pursue one’s creative potential. Everything else is a result of the active participation in this mission. Be it music, visual media or otherwise, all that I do is designed to continually expand into the creative field. This mission will not change, but forever grow stronger and I am looking forward to the infinite possibilities of the coming year.

S] What about the visual element in terms of video and live performance?

DS] I am currently working on a great many projects, all with the intention of continuing down this path of multimedia symbiosis. That is, that I am most interested in combining all medias into one. There is quickly approaching the time where there shall be no separation between mediums, and the only limits will be our imagination.

To list all that I aim to create would be far too much for this particular interview, and the list is forever growing. I am working feverishly to expand my work into every platform available, and beyond.

S] Your toy soldiers are worldwide now – what exciting plans do you have involving them in the near future?

DS] The Toy Soldiers have been so tremendously inspiring. To see thousands upon thousands of people gathering under the banner of creative vision is tremendous. I see them sharing the message of empowerment through play on a daily basis, and the fruits of their labour showcase their brilliant imaginations.

At the moment, The Army of The Toy Soldiers are in the early stages and they are doing wonderful things. I am looking forward to providing them with far more in the future. I look upon The Toy Soldiers as a focused group of visionaries, with whom I am building this Utopian Playland. This goal requires resources to advance and as we gain such resources, more and more brilliant creations are being realised.

S] Can you tell us about the experiences that inspired the track ‘Back And Forth’?

DS] ‘Back and Forth‘ is primarily a reflection of the system and it’s mode of reality engineering through the media, the “back and forth” representing the constant political dance in an attempt to manipulate the masses. I also like vintage jazz music.

S] How has your attitude to making music and the music industry changed since you began the creative process back in the 90s?

DS] In all that I do, I seek to evolve. The times change and the technology changes. I only try to utilise these changes to my best advantage. Seeing the state of the music business indicates a tremendous amount of change, some feel that it’s been negative but I feel that it is only a necessary evolution into a great field of creative exploration. I never considered myself a musician, but a creator who utilises, in part, the language of music to convey my ideas. That hasn’t changed, but I am looking forward to forever expanding into new fields that technology and the state of technology presents.

S] Talk us through what it takes to create the perfect robot?

DS] That’s tricky, and it’s something that I am still working out. I have had some successes in this department, and some disasters. First and foremost I would highly discourage the implementation of machine guns in any and all early models. This is something that I learned the hard way. Secondly, keep them friendly, and plastic. I should probably stop here, I don’t want to give away all of my trade secrets.

S] How do you maintain such a positive outlook on the world in such dismal economic and social times as we have experienced this past year and how can others learn from your example?

DS] One must always look ahead to the future and not become stuck in the past or present. We are creative beings and that is our purpose; to create. This means that there are always possibilities for change because evolution is in our nature.

If you want to talk about the past, look at the curve of technology as studied by Ray Kurzweil. This exponential evolution has remained consistent throughout war, economic depressions and otherwise. What we are experiencing is but a momentary growing pain in advancement towards a new horizon. There are forces who love to utilise this painful period to their best advantage by instilling fear and subsequently maintaining power, but these are not end times, they are beginning times. The creative power of the universe shall overwhelm those who stand in its way. It is our destiny. It also helps that I’m completely out of my mind.