London-based quintet Duologue’s 2011 has seen the band release two four-track EPs, tour the UK and Europe, and remix tracks by themselves and others. Tim Digby-Bell of the band tells us about their sonic and lyrical inspirations, and breaks down the Duologue live experience. 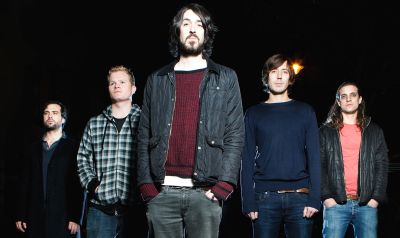 S] You’re one of very few bands able to marry dubstep-esque beats with classical elements and rock style – are there any challenges there?

T] “We were just always interested in electronic music, but we wanted to remain first and foremost a band. Blending the two things allowed us to have so much flexibility over sound and rhythm so we tried all kinds of stuff out. At the end of the day, the bits which worked best were inevitably the better songs, and the best production was what served the songs best. It’s easy to get lost in programming and forget the most important part.”

S] ‘Racketeer’ is an epic track, what inspired that one?

T] “It’s quite an old one, something Toby and I knocked up when it was just the two of us. When we got the rest of the band on board, we were able to take a studio production idea and really translate it into a full band thing. It’s really fun to play live.”

S] Where do you draw lyrical inspiration from? Are there specific people or places?

T] “All sorts really. I read a lot so a lot of inspiration comes from there. I never had any interest in being a narrative, conversational lyricist – not that I don’t love a lot of artists who are. I love lyrics that don’t always need to be explicit; that suggest more than explain. Those are often the lyrics in songs I keep coming back to.”

T] “Lots of exciting stuff. We just got out of the studio working with a producer for the first time which was great so hopefully more of that. Also, some dates abroad are coming sooner rather than later – and of course, the festival season.”

S] You recently created a video for ‘Endless Imitation’ – tell us about the development of that?

T] “I was reading about the scientist Asa Schaeffer who discovered that if you blindfold someone and ask them to walk in a straight line, they will always end up walking in circles. It seemed a good metaphor for most of my relationships. We shot it in Wales in a day, and not being too accustomed to exercise, was the most the most tiring thing I’ve ever done. It’s really hard work to walk blindfolded for 13 hours.”

S] You guys have been quite active with remixes as well, how do you enjoy that process?

T] “We’ve been doing a lot recently – Florence and the Machine, Little Dragon, Givers, Drums. One of us basically starts the project and then we email back and forth until it’s done. It’s great as we just get to focus on production and mess around on computers which is what we love doing anyway.”

S] For the track ‘Machine Shop’ you sampled the sound of old printers whirring, where did that idea start from?

T] “We make our own samples a lot – Toby and I both have handheld recorders so we’re always walking around hitting things, throwing stuff about – you can get great sounds that way. I love the use of organic sounds in electronic music, so that tune came from the idea of machines breaking down. We had this old printer that made such strange noises – we cut them up and made a beat out of it. A lot of our tunes start that way.”

S] If you could create a Frankenstien’s monster from out of the Duologue sound – the head of 65daysofstatic and the leg of Sigur Ros for example, how would you do that?

T] “I reckon we’d have some Sigur Ros somewhere, maybe the knees. We’d also have bits and bobs of electronics – FlyLo, Modeselektor, Aphex [Twin], Surgeon, Four Tet – they could be fingers or something. Then some Jeff Buckley, a bit of Arcade Fire, tiny bit of Nick Drake maybe, they could be limbs. At the moment that’s a monster with knees, three limbs and fingers. That’s perfect.”

S] In terms of a full-length record, what are the plans for that and how will it progress from the ‘A-B’ EP?

T] “Working with a producer has definitely breathed new life into the tunes. As our music spans a breadth of styles, the question for us has always been which tracks to choose as we write a lot of songs. We’re so excited about the record and year should be the right time. We’re constantly writing so you never know where we’ll be when it happens, but it will always sound like Duologue.”

S] You are gigging in London a lot, what about up North? Any more shows planned soon?

T] “We’ve our last show in London tomorrow (December 9) and Manchester on Sunday (December 11). That’s it for the year then.”

S] You’ve said you like to make your live show in to an event – a journey for the audience? Explain this in as much detail as possible – what would you ideally like to do with your live show?

T] “The sky’s the limit really. Using electronics live can be really unengaging for an audience, so we try and make it as live and exciting as possible. We try and structure the set like a DJ might; blending tunes, live looping, swapping instruments a lot. There’s a real progression throughout, going from bigger numbers to more intimate moments – at times using big electronics and others stripping it back to guitars, violin etc. We didn’t want it to be just another gig, so hopefully people will come away feeling they’ve been on a journey and then come back for more. We’re all about live, so the further we get, the more we’ll be developing the live show. With our sound it could be a really immersive experience, so come check it out.”

For more information on Duologue, please visit their website.