We speak to electronic and dubstep producer Prashant Mistry of Catch22 Music about his new genre-bending project the Engine-Earz Experiment and find out more about his plans are for the rest of this year as he gets ready to unleash the project’s new album, ‘Symbol’ in to the world. 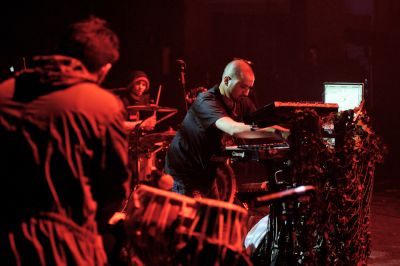 “We pride ourselves on giving our all every single night”

S] Can you talk us through the main sonic and lyrical inspirations behind your upcoming album ‘Symbol’?

P] “We wanted to write an album that really represents that struggle people are going through around the world at the moment. Hopefully, this would inspire people to not feel trapped or helpless and maybe even to create something of their own. Damn, it sounds a bit weird, but what can I say? It’s the truth! Researching the global situation and how we reached this place is something we’re all very interested in and I guess it’s only natural that it would come out through our music. After all, historically music has been at the forefront of movements to create and inspire social change. Sonically, I wouldn’t really know where to start explaining the inspirations, but there are definitely some Prodigy, Rage Against the Machine meets Nitin Sawhney vibes in there somewhere!”

S] What does Engine-Earz mean to you – you started out with a production company as Catch 22, so where and how does it fit in to your musical world?

P] “Well, with Catch22Music I was mainly producing vocal artists, we worked a huge array of different talented musicians; with reggae artists like Deadly Hunta, Solo Banton and singers like Aloe Blacc and Aruba Red as well as co-producing DJ Skitz recent album just to name a few. But I guess in the end I had something I wanted to say, so this is where the Engine-EarZ Experiment started. It was very refreshing to get back to my first love which was electronic music!”

S] You’re influenced by everything from rock to dubstep via classical Indian sounds; was it essential to fit that stuff in to the Engine-Earz work?

P] “I dont see it as a conscious effort to try and fit any particular sound in; I think that is when music begins to sound contrived and a bit forced. I guess we see it more about matching expression and soundscapes to create emotion; for example a screaming rock guitar can have the same energy as Pakistani Qawwali vocal, or for that matter a nasty synth sound; it’s all about contrast and context!”

S] There’s a lot of emotion in the synths for tracks like ‘Reach You’ and ‘Kaliyuga’, but Do you have a stand out song that means the world to you at the moment?

P] “That’s a tough question! I would have to say our collaboration with Ane Brun ‘Light From One’ is definitely one of my favourites on ‘Symbol’ as well as the track with Akala called ‘The Truth’ – he really summed up what the album is about in his verses. From a live perspective, both ‘Shadow People’ and ‘Nemesis’ with our frontman Data are absolutely dangerous!”

S] You incorporate live rock instrumentation (drums and guitars) in to your live shows and add a little more to the stereotypical electronic band sound – how important has it been to create a show; when you could’ve just relied on a computer?

P] “It boils down to how much you can really interact with the audience. Personally speaking, the greatest gigs I’ve ever been to have been the ones where the artist can relate to how the audience is feeling and build and direct that flow of energy to climax. Of course we use electronics and computers in our set, but we try to keep their function as organic as possible. Even down to the visuals that Splatty throws up on the screens is done fully live, this adds so much and hopefully the crowd never sees exactly the same set twice, even if we were to play the same songs.”

S] As a long-time musician and producer, is there anything that you are still learning about yourself through the music that you are making?

P] “As a musician, I never cease to learn. I guess from this album I have realised that patience is so important, its a completely different discipline to being in the background and producing another artist. There is always a temptation to rush; get worried that things aren’t as popular as they should be but luckily I have a great team around me to remind me that what we do is something different, and not to try to rush and write something like everyone else is writing – especially because dubstep has so much heat at the moment. It’s about doing what’s right for our path and having faith that everything will work out exactly how it’s meant to in the end!”

S] As an extension of that question; how does Engine Earz push you in new ways?

P] “Engine-EarZ Experiment has always been a challenge since it’s conception. our goal was to push the boundaries of production and live performance at every opportunity so if we feel like that isnt happening, then there’s probably something not quite right it! One of the most epic performances we’ve put together was the ‘Kaliyuga – fully live’ performance for our Maida Vale session with Mistajam on BBC 1Xtra; breaking that song down into veena, sitar, vox, drums, guitar, percussion, about 52 bass sounds, string parts and live visuals was definitely challenging! When we nailed it though it was the best feeling.”

S] What has the process been like getting the collaborators and musicians together for this record; has it been a challenging or fun process?

P] “It’s been both! There are a couple of artists that I had my sights set on, but they were touring or finishing their own albums (there is always album number two of course), but in all honesty I could not be happier with the artists featured on “Symbol”. From Lisa Gerrard (Gladiator, Whale Rider, Dead Can Dance) to Jenna G, Get Cape Wear Cape Fly, Akala, Shahid Abbas Khan to Kate Havnevik, they have all blessed this album with their own energy but also helped us tell the story we wanted to tell. The core band (Data, Kabir, Binge and myself) of course play a huge part on the album.”

S] Obviously, we deal with a variety of genres but specifically electronic and rock styles; why do you think rock crowds will dig Engine-Earz?

P] “Hopefully for the energy of our live shows! I used to be a rock drummer as a kid, so I know what I expect from a live band – basically we go nuts on stage! We pride ourselves on giving our all at every single live show and I think that is something that’s always been a part of rock gigs; you’re only ever as good as your last performance! That’s even more important nowadays with the arrival of video phones and YouTube at everyone’s fingertips.” 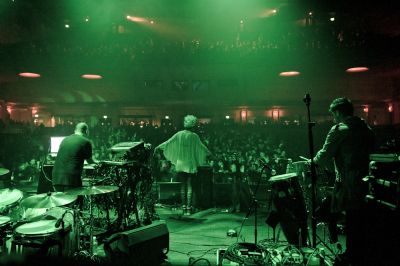 P] “Well having toured with The Streets earlier this year it’s about spreading the word even more and releasing the album ‘Symbol’ as well as lots more live shows; there seems to be a general feeling of awakening and awareness amongst much of the public regarding what’s happening around the world at the moment, so I can’t think of a more perfect time to push things forward! I’m also performing at the Royal Albert Hall on May 6 courtesy of composer Nitin Sawhney which is like a dream come true. We are confirmed for a bunch of UK festivals this year including Glastonbury, Glade and Big Chill, so that should keep us pretty busy. Also look out for a film called ‘Everywhere And Nowhere’ hitting cinemas this summer – we contributed a few pieces of music for that as well.”

S] You’ve got a tour coming up in May, so what are you most looking forward to about that and coming out of London to do some shows up north in areas like Sheffield and Lancaster?

P] “This is a European tour with none other than Tricky! That in itself can pretty much guarantee its going to be a mind-bending experience. When we reach Scandinavia, we will be hopefully performing for the first time with a couple of the featured artists we’ve collaborated with on the album so I’m real excited about that. We’re playing Sheffield at ‘Tuesday Club’ on May 3 alongside Benga which should be pretty special, then the day after Glastonbury we’re heading directly to Lancaster University for their end of year ball alongside The Noisettes – we’d better pack an extra set of clothes that don’t leave the tour bus or we’ll be looking a bit worse for wear!”

The band’s brand new single ‘Reach You’ featuring Lena Cullen is out now via iTunes.