SPHERE magazine recently caught up with Eureka Machines‘ Chris Catalyst – one of the North’s most “hard-rockin'” musicians, to talk about his career and the band’s latest material and plans for 2010. 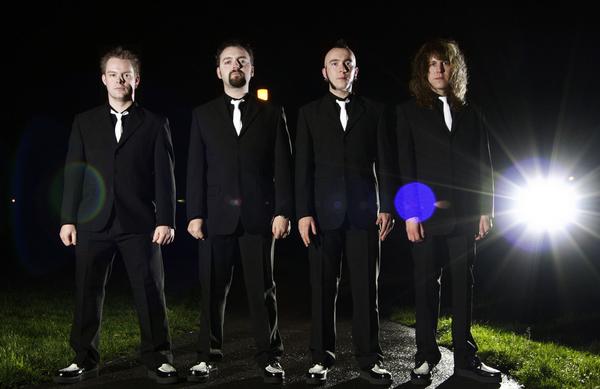 “I like playing the guitar and singing songs” – Chris Catalyst

S] You are based in Yorkshire – what do you think of the music scene in general?

CC] I can only really speak for Leeds, but I think that the music scene up here is pretty healthy. There’s a quality control thing that exists by a weird kind of osmosis that some people think is because of a non-existent clique. It’s not; it’s just that friends like to help each other out. There are surprisingly few egos up here… well; I don’t see that many people with egos, anyway. The thing I like most is that most people don’t care who you are, or what style of music you play, they just like good stuff.

S] There’s a perception that everything alternative and rock-orientated is based down south and that’s where you need to go to check everything out – do you agree with this?

CC] I don’t know, I’m not a huge Rock [capitalisation deliberate] fan to be honest these days. I mean, I like rock music, but I don’t personally align myself with it really. Certainly not the ‘rawwwk’ stuff. There’s a certain amount of me that can’t really be arsed searching for new stuff these days too, which is pretty bad. There’s such a wealth of brilliant old stuff out there that I am aware of but don’t know yet, and I’d rather suss all that out than spend a load of time digging through the latest press-led fads. I don’t own a single thing by Tom Petty, or The Adverts, or Mercury Rev. I have a feeling that I will be more inspired by them than whatever the latest nonsense here-today-gone-tomorrow fodder that the national press are peddling. For instance, I totally missed out on Low when they were on the go, and picked up a load of their stuff a few weeks back, and love them now. Anywhere, where was I? Bands come up North a lot, and you always have the net to listen to stuff.

S] Can you remember the first experience that got you into music?

CC] Nope, it was just always there. I don’t come from a musical family, no-one else is in bands or plays anything, but there was always brilliant music on when I was a kid from my parents and my older sister – from Bob Dylan to Bob Marley, to The Dubliners to Queen, to Billy Joel, to Motorhead to The Smiths. I have my folks and sister to thank for a very well-rounded entry into pop and rock music. I also have them to thank for a receding hairline, an occasionally irresponsible but fun approach to money and cigarette addiction.

S] You have worked with many national and international bands including The Sisters Of Mercy and AntiProduct – how did you get involved with these acts specifically?

CC] The Sisters needed a guitarist, and a few mutual friends (Danny Mass from Salvation, the producer Dave Creffield and my mate Andy) recommended me. I’d done some session singing for Adam the former lead guitarist, so they knew my name from that. Andrew and Simon came to see me do a gig in Leeds, and offered me the job in the back room of the pub we were in – which was holding a game of bingo at the time – Rock and roll! We instantly hit it off, and instantly hit the ‘offy’.

For AntiProduct – I’d known them from supporting them a few times before, and they always used to stay with my folks when they played in Yorkshire. They needed a new bass player, and I play the bass, so I did that for a bit. I left to concentrate on my own stuff, but we’re still all mates, and I did some recording for them only last week. Milena will also be the fifth member of Eureka Machines one day – she doesn’t know this yet.

S] Who are your favourite acts and artists in the North right now?

CC] Tough question, because most of the bands that I see up here now are friends or at least friends of friends. I really like The Shadowcops from Manchester, going to see them at their best is like standing in a wind tunnel of rock. I am listening to the latest Scaramanga Six album now and it is utterly fantastic. The Terminals are a great blast of punk-rock-pop energy. Also, Napoleon IIIrd is a genius. Separating bands into a North and south divide is not that cool though, we are all just from the world now.

S] Do you miss Robochrist and why did you start that project?

CC] I started it because frankly I used to do a lot of drugs and had some strange ideas. Actually the strange ideas didn’t really end when I stopped doing drugs. I don’t really miss it, it was fun for a while, but in all seriousness it got a bit lonely, and it also got a bit boring. I’ll do some more recording one day, when I get around to it.

S] What’s your biggest personal inspiration and why?

CC] I like playing the guitar and singing songs and I happen to think I’m pretty good at it now. My main inspiration is the hope to continue not having a proper job.

S] Can you explain the experiences that led up to the writing of ‘Everyone Loves You’?

CC] That was one where I thought of the video before the song. I went to see Pink Grease at The Faversham in Leeds and got hammered. The next day, me and some mates went back there to get some lunch and the staff were replaying the CCTV from the night before, as Pink Grease (incidentally lovely lads, and a great band) had had their backdrop sign thing nicked. Watching it made me think of a great video where a boy meets a girl in a club and the story is told on CCTV. To quote m’great showbiz mates The Cribs, there’s a lot of mirror kissers in any major city, and Leeds is no exception. It’s basically about them. Ironically, on said video, there is footage of your correspondent, quite clearly ‘fuelled by designer lubrication’, trying it on with a girl, and getting totally knocked back.

S] Can you tell us the themes and ideas behind Eureka Machines’ ‘Do Or Die’?

CC] Lyrically, it’s all positive stuff about wanting to get off your arse and do something less boring instead. And, there’s odd tale of my life, nothing too in depth or personal. The next album is much the same, only a little more personal in places. Musically, it’s just a mish-mash of our record collections.

S] In your opinion, how does Eureka Machines as a project represent your personal musical growth from when you began your career until now – do you feel like you have developed through the music?

CC] I think that it’s the best stuff I’ve ever written, but then some of it was written when I was fifteen (‘The One Who Wouldn’t Change You’). The next album is better though. I am constantly trying to outdo myself – I dare say I’ll grow out of that though.

CC] This year is my last year of my twenties and the first of my thirties. I was shi**ing myself about it, but I’ve accepted it now and I try to embrace whatever comes around the corner with a smile, or at least a forced grimace. Personally, I want to get fitter, write better songs, get better at cooking and grow my hair. Band-wise, I’d like world domination, million dollar contracts, supermodels, cocaine. Not really though – we’ll just continue ploughing our own furrow and seeing what comes of it. We’re incredibly ambitious, but we’re also not stupid and won’t be falling for record label and press bulls***. This almost instantly reduces our chances of mainstream success to around nil. But you never know.