A decade on from their foundation, Exit Ten have just released their second album, ‘Give Me Infinity’, which is receiving positive reviews in the rock press. The band’s guitarist, Joe Ward (centre in photograph), recently spoke to Soundsphere about the band’s progression from then until now. 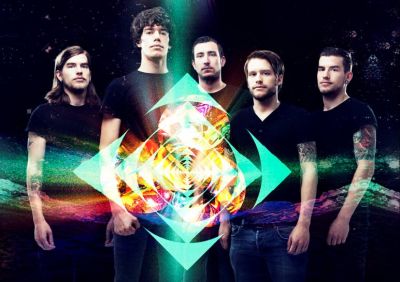 “Don’t give up. Be strong and try and live the dream!”

S] How have your goals with Exit Ten changed and developed since you began your career?

J] “At the moment we’re playing for fun. Obviously, we want to make a career of it, because who wants a normal job? However we’ve had so many set backs that at the moment we just really appreciate that we’re still together. It’s awesome where we’re at now though.”

S] What were the biggest challenges in getting ‘Give Me Infinity’ ready?

J] “It was hard waiting for the release as we actually finished recording last January. Obviously, when you start writing, you worry about getting enough tracks written, but it was almost the opposite. As we were writing for fun and there was no real pressure, the creative juices were flowing and tracks were flying out of the rehearsal space. I work in a guitar shop also, and that’s a great place to work when you’re writing an album. You just get to sit and fiddle all day! Excuse me.”

J] “Hopefully, lots and lots of touring in the UK and Europe. All the big festivals and we’ll start writing again.”

S] As a band that have been going for over a decade now, has your attitude to touring changed – you still play a lot of smaller cities like York and Hull for example, despite your rise in status?

J] “We used to go crazy and party a lot and treat it like a lads’ holiday, but now we’d much rather have a few beers and go back to a motel for a sleep. You gotta bring your A-game to every gig, and a hangover sort of prevents you from being able to do that.”

S] Also, can we get your thoughts on British rock music as it stands at the moment?

J] “It’s good. People have started appreciating home grown stuff a bit more. You don’t have to be American for people to think you’re cool anymore. I hope Americans think British bands are cool though. That’d be helpful for us getting out there!”

S] ‘Suggest A Path’ has been well-received globally and it’s a great representation of the uplifitng and melodic sound of the record; did you deliberately set-out to create an uplifting collection of material?

J] “Well, we wrote whatever we wanted to be honest. The album is so diverse, but I think it’s important to stay positive, and we haven’t exactly had an easy ride, so we didn’t want to get bogged down with all that shit and those negative feelings. Plus, we’re not angry youths anymore shouting for the sake of it.”

S] Did you have a lot of fun experimenting with progressive elements on this record – it seems like the mood in the band right now is a positive one, and that’s reflected on record?

J] “Haha, I think I was a bit premature there! See above!”

S] Our favourite is ‘How Will We Tire’ – can you take us through the creative process for that one?

J] “Just loads and loads of layers. Way more guitars than we can play at once. Strings and piano. I imagine it as a song for a James Bond film.

Me and Stu both write the music and Ryan writes all of the lyrics. This was one of my songs. It’s pretty straight forward and really really catchy.”

S] Which track from the new record do you feel best defines where Exit Ten are at right now as a band?

J] “‘Lion’. It’s really different to our older stuff. It’s a song with a clear message. Don’t give up. Be strong and try and live the dream!”

Thanks to Joe for taking the time to speak to us. You can find out more about Exit Ten on their website.