For our latest spotlight interview, we chat to Scott Lee Andrews of Welsh awesome-noise-rock merchants Exit_international about their recent rush of success (ushered in by the positive reception for debut album ‘Black Junk’), touring the globe and plans for the rest of this year. 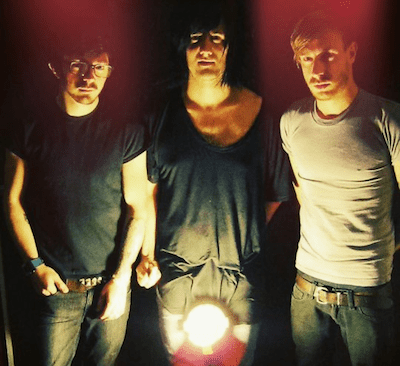 S] How do you look back on the success that ‘Black Junk’ bought you now?

SLA] “To be honest, it is amazing what this album has helped us achieve. Going from the initial novelty of forming a band to make horrible noise and mess with people’s heads, then to hearing us on daytime Radio 1 in the space of three years is insane! We’ve played some incredible shows and festivals (Including Reading and Leeds) and caught the attention of some of our heroes; including the guys from Girls Against Boys, Justin Pearson (Three One G Records) and most notably Ginger Wildheart, who I’ve been a fan of since I was a kid. He took us on tour, pimped us to death and made our Japanese dreams come true. And to wrap the campaign up, ‘Black Junk’ is a nominee for the Welsh Music Prize 2012!”

S] Scott, how is the inspiration different from your work with Midasuno?

SLA] “I wrote pretty much 95 per cent of what Midasuno did, so having the ease of writing together as E_I really makes the songs come from stranger places than I would have thought. I suppose my ‘pop’ head helps with the melodies and ‘hookiness’ of our sound, but we all contribute equally to the process – even Adam [Thomas, drums] comes up with bass ideas – everyone is really involved, including the lyrics.

S] You’ve had support from legends the likes of Steve Albini and Ginger Wildheart as well as new bands like Bad For Lazarus – what does that mean to you guys?

SLA] “Everyone has been so supportive, I’d imagine it’s because we are an anomaly in the sense that you can’t quite place our ‘vibe’ or work out exactly what we are all about. Hell – we don’t even know half the time. The love and support we’ve received has been humbling and shocks me. There’s a great camaraderie between a load of bands we’ve met and gigged with and stayed good friends and musical bedfellows – bands like Pulled Apart By Horses, Hawk Eyes, Baby Godzilla, The Witches Drum, Bad For Lazarus, The Dogbones, The Death Of Her Money, The James Cleaver Quintet; there are tonnes of them! We’ve also just become good buddies with Castrovalva – Check them out!”

SLA] “When I sent Ginger a rough master of ‘Black Junk’ in March last year, I just wanted a reaction or perhaps reassurance we were on the money, but his reaction was amazement! From there we talked alot and he asked me to record something over a track no-one had nailed a vocal for. During the final mix sessions for the E_I album, I wrote some lyrics and smashed out a very quick but full vocal for the song – the brief was “…Mental”. I really pushed my voice on the track. The TFE project then hit some problems and Ginger worked through the ‘555%’ project. I was invited to a recording and writing session for the ‘Mutation II’ album but sadly couldn’t make it. I did hear recently that my vocal was mixed and made the track I worked on! I suppose you’d better pledge for the album to hear it!”

SLA] “Adam and I used to live together, and he came into my bedroom and told me about a dream he had. I was working on lyrics at the time so popped a rough re-telling in my [song] book. When it came to recording the track (Which was called ‘My Hiroshima’ at the time), the lyrics and melody were totally different to ‘Bowie’s Ghost’ didn’t sit right. We almost binned the track. I went and sat in Carl Bevan’s [Ex 60ft. Dolls and current E_I producer] car, went through some lyrics, hummed for a bit then went in and nailed the parts in 15 minutes. Job Done.”

S] You’ve already written some new material, right? Talk to us about a new song you’re working on – a favourite perhaps?

SLA] “We’ve written about 10 songs, six are definite keepers and there’s some parts and sections of the remaining for that will be bastarised into new material. We have definite plan where we want to take the direction of the album. We’ve even had some very influential people who we’ve won over who have offered to write some songs for us – which is out of this world. It’s an idea we are very much open to if it works out. There’s already a few singles in mind as well, we’re on track for a spring/summer 2013 release with a single or two before it. We’ve played a few live – ‘Nitro Zoo’ has gone down well and we recently debuted ‘The Creeps’ and ‘F.L.T’ which people were singing along to. We must be on the right track there then!”

SLA] “We’ve been writing our acceptance speech for when we claim the Welsh Music Prize since we found out we were nominated! [laughs]. No, we are writing every week, we have a mini-tour with Baby Godzilla at the end of September, then a WMP show at the Coal Exchange in Cardiff followed by a SWN Festival appearance. We’re also doing a co-headline tour in December but cannot announce who we are going out with yet. Stay tuned!”