Band Spotlight: From The Bogs of Aughiska

Wait, what?! Ireland is dark, isolated and windy? And all this time we thought it was just leprechauns, Guinness and folk music. We should note that both those descriptions came from Conchúir O’ Drona, frontman of From The Bogs of Aughiska, who we chatted to about a million years ago, and to assure you we’re not just passing the buck here, the latter statement was made in jest, so no whining! And if you must, whine at him, rather than us. Cheers. 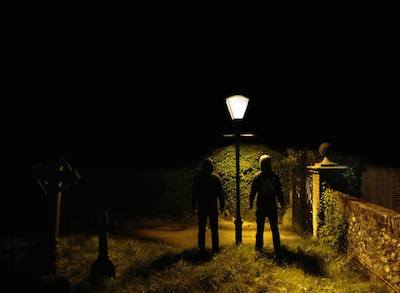 Right, now that we’ve passed the buck, let’s get into it. That realistic portrayal of Ireland you just read is an important part of O’ Drona’s music. “I just wanted to create the kind of music that sums up growing up in the west of Ireland. I’m doing what black metal bands might do but from an Irish perspective.” Listening to the album, it’s difficult not to get a feel of that cold isolation. It’s full of perturbing ambience and musical fields of mist.  “I wanted to introduce percussion to this music. I wanted to have something different and wake up the listener, but also point at something that it might sound like in the future. I was fortunate enough to have friends who are good musicians.” One can’t help but wonder how this music comes across live. “I think we’re definitely best when we play live. It’s a lot more intimidating, we wear balaclavas and stuff so you can’t see our facial expressions, so you don’t see a human being you just hear the music.”

This isn’t O’ Drona’s first project either. “Drugzilla was more negative and extreme, but I’ll probably be putting that to bed in a couple of years. I wanna put my energy into something like Bogs.” Damn, we couldn’t get enough of that madness. Then again, working full time as well as keeping two bands on the go must be difficult. How does he manage that? “After working nine ‘til five you don’t wanna be producing music, so it’s hard to get motivated sometimes. Maybe it’s just me trying to do too much but I wish I could structure my time a bit better, but every now and again I get into the zone of writing music and once I get started I tend to turn over music really fast. It might take me months to get something together, but once I get anywhere at all it happens very fast.” Life’s tough, especially for the dudes with the searing creativity, but is the process the most difficult part? “One of the hardest things is probably getting a booking agent. You have to do everything yourself to a point where they come after you, but we still haven’t got to that point yet, and that is frustrating at times. And despite the great reviews we’re getting, people don’t go out and buy CDs, so sometimes you feel like you’re wasting your time, but then you realize you’re just making music for yourself anyway. But that can be frustrating, particularly when you spend money to release music yourself.”

Despite those frustrations, the man is still determined, and in this spirit, we talk about his plans for the future. “I’ve been signing a lot of interesting extreme metal bands, and I wanna push the Bogs stuff and see how far we can get it. We’ll add more percussion elements, and more vocalists. Anything’s possible really. I haven’t written anything, although I’ve kind of started on some new stuff. I reckon within a year I’ll have another album finished.” Exciting stuff, especially for those of us who are enthralled by experimental music. Yeah!