The spirit of punk poetry is deeply embodied in the work of York’s Henry Raby, whose writing and performing career has evolved over the past five years and draws influences across the musical and literary spectrum. We chat to Henry about the state of the arts, his DIY “poetryzine” and what poetry slams are all about. 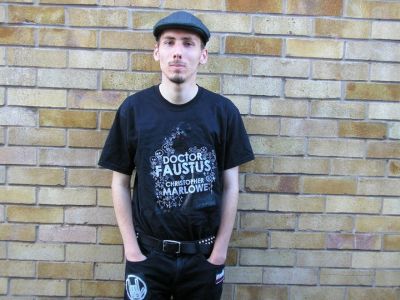 “If some geek who happens to like punk music can do it, any sod can.”

S] You’ve been writing and performing since 2007. Did you have a strong desire to perform before you first took the stage?

H] “I’ve always gone to the theatre and was a member of York Youth Theatre, so being on the stage with eyes on me was never something new. But being an ‘actor’ was something I never really wanted to pursue. So I guess this performance poetry lark made sense.”

S] Who inspired you most to pursue your punk poet career?

S] We believe you’ve got a strong passion for cartoons and comics. In what ways do you incorporate these into your work?

H] “If you loved something when you were younger, why stop loving it when you’re older? Plus there’s a lot of cultural weight behind Dennis The Menace or Spider-Man. They speak to people deeper than real life people ever can.”

S] Are you the kind of artist who finds new sources of inspiration as a continuous process? How does it help you nurture your craft?

S] We caught one of your sets at the recent York Peace Festival. Is there a certain cause, or causes, which you’re keen to support?

H] “The main one has to be the current Anti-Cuts campaign. I feel it’s the responsibility of the individual to use their skills, talents, time, energy to do what they feel they must within a campaign or cause. However, an artist must always be wary if they put their political neck on the line; they must be able to walk the walk as well as talk the talk. There’s no sense in writing a play or song about protest if you never actually go and protest. And always be wary of becoming a tool for propaganda or a tool for a larger political organisation hooking into a cause/campaign/movement – it’s a fine line. But I could talk about this for hours…”

S] Why are these causes important to you?

H] “From an arts perspective, there never was much money, but they recently took away every penny they could. It has crippled small scale organisations that genuinely help people desperately in need of an artistic outlet; work in communities, education, prisons, schools or with young people, disabled people, young offenders or as drama therapy. They think they can get away with hacking apart the arts because it’s perceived as a frivolous addition to society rather than an integral part.”

S] When you’re performing, you sometimes get involved in poetry slams. Can you describe what they are?

H] “A slam is where the audience are chosen to give each performer a number between 1 and 10. The performer is given a certain amount of time, usually about two minutes, to deliver their stuff, which means the emphasis is on catching the audience’s attention in a short amount of time.”

S] What’s the vibe like for you when you’re taking part in a slam? Are there different stages to the experience?

H] “The vibe usually has more energy and humour than a normal poetry night; performers crank up their game. It brings out the best and more exciting poets and the element of competition can make a room electric.”

S] How does the audience respond? Do they have a particular role in the slam and how does it impact on the participant?

H] “Usually, about five audience members are the judges, but they’re reflecting the wider audience, so it’s all about how you get the room psyched and feeling. Sometimes, it comes down to a Clap-O-Meter where whoever gets the most applause wins. Sometimes, it depends who’s brought the biggest crowd down to the gig, but certainly it adds an element of ‘liveness’ to a medium sometimes confined to the page.”

S] You produce a ‘poetryzine’ in the spirit of a classic fanzine. What lead you to put it together?

H] “I performed at Strummercamp 2011 and figured I’d better take some ‘merch’ just so people will have something physical to take away to find me online, remember my name. Typical marketing ploy. My girlfriend and I decided to do something more concise, so we created Snapping Turtle Press. She’s more punk than me, and far more artistic and creative, so it’s got her fingerprints of punk DIY ethos all over it.”

S] It has an authentic hand-produced feel to it. How do you put it together?

H] “Literally a bit of scanning, glue, photocopying, printing and scanning it was done in a day or two. It’s as easy as that.”

S] Who contributes to the poetryzine? Do you accept poetry from other people?

H] “The first one was just me and her, but then we opened it up mainly to people we knew for Issue 2. We accepted three poems; one by Jim Higo, someone else and Jake Holdsworth on the theme of urban/cities/towns/streets etc.”

S] Where can people get their hands on them?

H] “Drop me an e-mail! They’re 50p each, plus a tiny bit for postage and packing. Money just covers ink, staples and paper really.”

S] You also share your poetry on your blog. How do you think the Internet has moulded how poets like yourself get your work published?

H] “I think the best asset has been YouTube. For some reason or another, for about three years I never had a single recording of me live, and then this past year I’ve managed to be recorded several times at several events, which is great when asking for gigs or selling yourself to venues, because I guess they imagine that poetry is quite a static thing and might not work in a music venue with a live crowd so hopefully Youtube videos show performance poetry has a kick to it. I think all poets find this useful that their personality and style and delivery and performance are all for show in videos as opposed to purely on the page.”

S] Do you believe using the Internet as a virtual stage has an impact on who potentially makes up your audience?

H] “I think people always looked for their events, music and arts. It’s not like there was never a spoken word or music scene, based on performers postering/flyering/advertising and audiences just going out and eagerly hunting for it. It’s obviously easier, faster and more accessible now, but I think that essential search for something exciting still exists. And at the end of the day; raw music, poetry and theatre are all live mediums anyway.”

S] How do you respond to the comments and feedback you get from your website? Do you find ideas and inspiration from blog visitors?

H] “Usually it’s people face-to-face, which is cool. I’m always on the hunt for feedback, good or bad. Someone needs to set me right.”

S] It’s been a busy few months for you in terms of performance. Does this affect your ability to compose new poems?

H] “It always seems to be busy times; there are always gigs to go to, blogs to write, a play to rehearse, gig to organise, mates to hang out with, theatre to see, films to watch, reviews to write, boards to sit on, theatre management-y stuff, songs to write, family stuff to do. So, If I’m not busy I usually find something to be busy about.”

S] What can we expect from you in the near future?

H] “I’m hopefully going to put together a proper ‘show’, a collection of poems, but with a running theme, set length and one that can be performed in venues.”

S] You’re putting together a dinner party where you can invite five people, famous or not, dead or alive. Who do you invite, and why?

H] “Hmmm… I’d love to meet my heroes like Joe Strummer, Franz Kafka, Frederich Nietzsche, Neil Gaiman, Alan Moore; but I think it’d be a messy, awkward party. So I’d go with five of my best mates. I can’t say which ones cos the others would get mad, but let’s say it’d be a damn fine night and we’d probably sing The Pogues at some point.”

H] “Please book more for any event, I am ever so lovely! But listen kids, poetry’s dead easy. If some geek who happens to like punk music can do it, any sod can.”