Recently, we had the pleasure of chatting with Tim Phillips from US electro-rockers Hollowboy immediately following their tour with Mindless Self Indulgence. With an ever-growing international fanbase and a wealth of songs that set a very high standard for other crossover acts to follow, we thought that this would be the perfect time to quiz the keyboardist about the band’s influences, new music and plans for a possible UK tour. 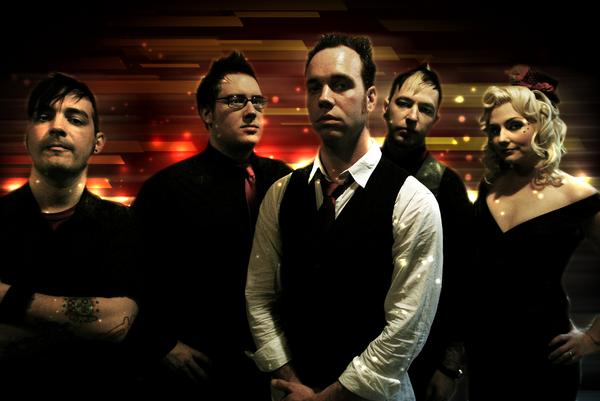 T] To finish writing and release a full-length album. That is my number one priority between now and the end of 2009. We have so many songs we’re excited about playing live right now that didn’t make it on to the EP we released just before the MSI tour. Getting these songs and more on a release would be ideal.

S] What are you looking forward to most about a possible trip to the UK at some point, you have had a great reception over here?

T] Getting a chance to introduce new audiences to our music is always invigorating. Going overseas and being able to reach out to people that have only heard us online would be extra special.

S] Can you tell us about the band’s major thematic inspiration on the new EP, specifically on the song ‘Antics’ – The material seems to be very personal?

T] I never put too much thought into the theme of the EP however you can say it has something old, something new, something borrowed, and… a remix. Even though the song title ‘Antics’ came about before the lyrics, it is more-or-less about finally exposing another person for their repeated mistakes. Jesse (vocals) wrote the words and could elaborate, however I think everyone has had at least one person in their lives they can relate to this.

S] You touch on Goth, rock and Industrial styles within your sound – can you give us the musical recipe for Hollowboy, in recipe format if you please?

T] Two quarts of The Cure, one jigger of Joy Division, plus a dash of Depeche Mode.  Serve with a handful of Nine Inch Nails over icy beats. (Shaken, not stirred!)

S] The imagery is pretty striking, with the bleeding heart on the stone, what inspired that?

T] Our friend, Jeff Jacobs, came up with the concept and designed it based on the name ‘Hollowboy’ and the music itself. Displaying your own or other’s feelings for everyone to see and dissect is what comes to my mind when I look at it.

S] You seem to have some great ideas to translate visually, will we see the live show expand in any way over this year, also perhaps a video?

T] I always think we can add a little more dramatics with our own lighting rigs. The challenge is finding the time and space to incorporate additional elements to our show since we normally have five of us on stage. A video would be great to promote the band, however the priority right now is writing new material and honing the songs we already have for an album.

S] You have a very strong live reputation, what do you enjoy most about the live experience as Hollowboy?

T] The interaction with the audience during the songs and after the show is, by far, my favourite.  Seeing the reaction of the crowd getting into our music really excites me onstage and meeting fans old and new afterwards is just icing on the delicious Hollowboy cake.

* Thanks to the band and Corey at DAMN Management for setting this up.