Invaders are an electro-rock band from Sydney, Australia who formed in early 2011 and recently relocated to the UK to reach a few more people. They’ve done well. Ears are now pricking up as the band have toured nationally and earned support slots with the likes of Young Guns and AWOLNATION – not bad, eh? Just prior to the release of their stormin’ new single ‘Hummingbird’, we chat to the band (Tyrone Bain [vocals and programming], Gene Clark [Drums] Archie Mann [Guitar] and Alex Raffaelli [synths/programming]) about their influences and plans for this year. 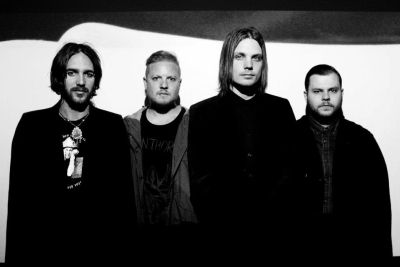 “We’re all about lots of bass, massive drums, big guitars and anthemic vocals”

S] You’re playing a renowned gothic music festival in Germany this year – what’s your attitude to that fest?

Alex] “M’era Luna Festival is our very first festival and we are so excited and privileged to be playing it. While our sound is not necessarily gothic we have heard that Germany has some of the most passionate, open-minded and enthusiastic crowds in the world. We have a dark tinge to our music, and we are akin to headliners Placebo, so we should go down quite well. As music fans ourselves we are keen to discover some fresh new sounds of some sub genres we may not usually listen to. It’s going to be a real eye opener.”

S] Why did you make the move to London from Australia, originally?

Archie] “The reasons we moved to the UK and goals we set ourselves have already started to pay off. Being so isolated in Australia from the rest of the world we decided to move here to create opportunities for getting our music to a wider audience and to have the chance to tour the UK and Europe. We feel blessed to have already played with bands like Young Guns, Arcane Roots and AWOLNATION and we don’t want to take it for granted. We are heavily into electronica so moving to the place that spawned so many amazing artists across the electronic genres was definitely a draw card for us. We also love the punk and hardcore scene here so it was the perfect move. Overall, the music scene in the UK and Europe is thriving.

We also wanted to move to a country that has so much history with music and in general. Australia is such a young nation being just over 200 years old. We wanted to open our minds and gather different forms of inspiration. There is no shortage of it when Europe is right on the doorstep of the UK.”

S] How are looking forward to shows with Kids In Glass Houses and AWOLNATION?

Archie] “We are itching to play as much as we can at the moment. Our live show is what we really thrive on. There is plenty of energy and buckets of sweat. When we heard that we were playing with KIGH we were stoked! They are an amazing band both live and on record. We are opening for them both in Coventry and Liverpool. We were lucky enough to play our first shows ever with AWOLNATION and Arcane Roots earlier this year. So, to be asked to open for them again is amazing. We made some great lasting friendships with both bands so hanging out again will be great. The HMV Next Big Thing show at the Garage is sold out, so it’s going to be a huge night!”

S] You’re also playing Liverpool Sound City this year – what a great mix of artists! How are you looking forward to that one?

Archie] “It is such a privilege to be on the festival and sharing stages with some incredible bands like Alkaline Trio, Temper Trap, Lower Than Atlantis, Arcane Roots and so many more in this iconic music city. We love that Scouse accent too haha. We are main support to Kids In Glass Houses and we hear it is going be one huge party!”

S] How do you feel about a potential genre tag of “industrial music”?

Alex] “We have never considered ourselves to be an industrial act but it seems to come with the territory when you mix electronics with big guitars. We’d like to think of our music as being able to transcend a specific genre.”

S] What is your mission statement as a band – what are your aims and goals?

Alex] “We want to continue to make music that takes in a vast array of influences from the wide musical scope to create something interesting, and at times experimental, while still remaining accessible to a wider audience. We also feel the most fulfilled when we are on the road touring, so we want to play as many shows, all over the world as we can.”

S] Talk us through ‘Hummingbird’ – what does that track mean to you on a personal level?

Tyrone] “The ‘Hummingbird’ lyrics were written on the spot in the studio during pre production, we had just mapped out the music and got it ready in a very short time so I was a bit rushed to come up with something in an hour or so – to finish the track in a one day session. I had this idea in my phone that I thought would be a good lyrical theme, the metaphor of a hummingbird that flies backwards, teaching us to look back upon the past but not dwell on it. Throughout, I guess it is about trying to overcome a past trauma and finding a way to do that by finding a sort of ‘love for life’ through someone else perception.”

S] On ‘Vapour’ and other tunes, you deal in dubstep – what interests you about that style, as band that uses a lot of rock instrumentation?

Tyrone] “The dubstep experimentation was a bit of a learning curve. We were restricted to writing the EP in our flats, so there was a lot of experimenting with electronic music production. We don’t have a bass player so we needed to design the bass ourselves on all our tracks. It just so happened that the ‘wobble bass’ fit best for ‘Vapour’ as the tempo is 140 bpm.”

S] What things inspire you lyrically – do you need to be in a specific location to write, for example, or can it come from something you read, or on TV?

Tyrone] “An inspiration for some tracks on this EP was dealing with the move from Australia to London. We came here on a kind of ‘last minute’ basis. So we were very little prepared and had very little money. It was a shock to the system coming in one of the coldest London winters they’ve had in years. Settling in has been a bit of a struggle. I do read a bit, and incorporate some idea’s into my own.  As for location, anywhere – anytime, just give me a pen, or I suppose I can use my laptop, though I’d prefer a pen so I can doodle.”

S] Is there a song from the ‘Hummingbird’ EP that you feel perfectly defines you as a band right now?

Alex] “It has to be the title track ‘Hummingbird’. It sums up our sound in under three minutes. Lots of bass, massive drums, big guitars and anthemic vocals.”

S] If you had to come up with an Invaders’ “Frankenstein’s monster” for your sound – for example, the head of Nine Inch Nails, the arm of Skrillex and the legs of Placebo – what would it be made up of?