Arguably, Late Night Fiction have become Hull’s brightest new rock hope. Their music is influenced by everything from Deftones to Converge via Grammatics and Hell Is For Heroes while their own sound is hard-hitting and wholly infectious. We chat to guitarist James Thompson about the band’s influences and plans for the future. 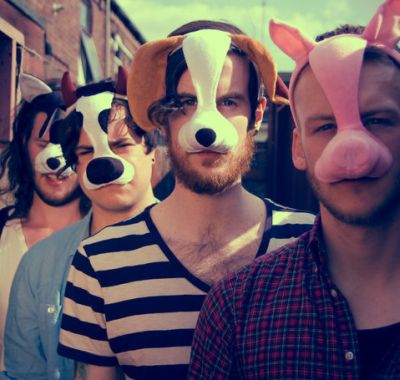 S] You guys describe yourselves as “post-Hessle foreshore core” – can you give us a definition of what it sounds like?

J] “Absolutely not. We knew this would happen. That was an in-joke, our way of being awkward when people asked us to pigeonhole our sound. We went through a phase of saying we were a post-insert-something-ridiculous-core band. We take a lot of dynamic and melodic influence from a lot of post-hardcore bands like Hell is For Heroes and Million Dead, so we should probably change our website so we don’t across as a ‘post-idiotcore’ band.”

S] Being signed to Grey Man Records and having the video to ‘Dialectics’ filmed at Hull Boathouse, it’s safe to say you’re proud of where you come from. Does this inspire your music?

J] “Actually we feel there’s more for us as musicians outside of Hull than there is in it, so we try to tour as much as we can. That’s not to say that there aren’t some amazingly committed people in Hull doing some great things for the scene, and we do have a personal affection for the city, but we feel we’d be making the same music wherever we were based. Our music is more about the experiences we’ve had, rather than where we’ve had them.”

S] You recently performed at the Freedom Festival along with other bands from Hull. How was the experience? Are there any bands who performed who stood out for you?

J] “The Sesh Warehouse Project was by far the best thing to happen to the Hull music scene in years. It was so well put together, and there wasn’t a bad band on. We had an awesome time, the crowd was sick and we took some names. The rest of the Freedom quarter had an amazing atmosphere and it was great to have played a part. Performance wise, Belle Collective, Manmade Noise, Polarsets and John Cooper Clarke were all awesome.”

S] What’s your advice to Northern bands and artists who are taking their first steps in the world of music?

J] “Just play as many gigs as you can, and get out of town. Be nice, be professional, and don’t piss off the sound guy. You’ll get a reputation for just doing your job, and promoters will have you back. Get a mailing list, and e-mail people. Remember, pre-gig two beer maximum. Have a regular band curry night. Talk to people who’ve done it already. Be cool. Keep it real. Call your mother.”

S] In the 18 months you’ve been together, you’ve played with an impressive roster of bands. What’s it been like sharing the performing experience with these bands so early in your history?

J] “It’s nice playing with bands that we like, and listen to out of choice, and it’s also nice to know we’re starting to deserve sharing stage with them. Watching bands like the Xcerts and Dinosaur Pile-Up perform has only made us push harder to get our live show even tighter.”

J] “Our dream will not be complete until we’ve played with Wu-Tang Clan, DJ Shadow, Rolo Tomassi and Converge on the same bill. We’d just love to see that.”

S] You’re receptive to the response you get from fans and the press, including endorsements from ourselves. Is it important for you to have that interaction?

J] “Very, it’s awesome when people show an interest. We’re not too cool to be grateful for every fan or reviewer who likes our songs, and of course it’s a massive buzz if just one person is into it. It’s only right that if people decide to follow us, we keep them as involved as we can, so we try to reply to every fan who gets in touch personally, even if it’s just a little nod if they post on our Facebook.”

S] How does the reaction you get impact on how you create and perform?

J] “We like to think we put on a great show, whether we play to two people or 200, nevertheless, we have a saying in the Fiction, ‘If the crowd be vibin’, we be drivin’. When we’re writing songs, we’re making the music we would want to listen to ourselves, and we try not to write music we think we ‘should’ write to fill a market niche. We still have to trial songs live, and there’s stuff we’ve thought has worked in rehearsal, but not at a gig, so as painful as it is, we’ve had to drop it and move on. It’s great when people like a song though, because we know we’re doing something right.”

S] What does the future, as it currently stands, hold for Late Night Fiction?

J] “We’ve just come back from the recording studio in Glasgow, where we’ve just finished recording some tracks for our second EP. We can’t tell you the title or much about it yet, or we’d have to kill you. All we can say is that it’ll be out in the new year, and we’ll be announcing a big tour around its release.”

S] Final question for you; you’re booked into a hotel for the night and the owners only allow you to take one book with you. Which book do you bring, and why?

J] “‘The Timewaster Letters’ by Robin Cooper. That book is hilarious.”