Australian artist Lucky Valentine is a true creative. His music is a varied and genre-bending mix of electro, pop and rap influences and the message embedded within this unique sound is one of positivity and passion. We spoke with Lucky recently about his music and the themes behind his debut album, ‘King Of The Kerb’… 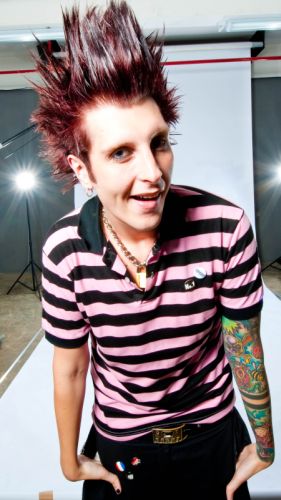 “Everything is going to be in-your-face and instantly recognisable”


S] How do your surroundings impact the music that you make?

LV] I think coming from a middle-class family in a middle-class suburb of Sydney, Australia, really shaped the person I am today; which obviously has rubbed off in my music. In the middle-class we’ve always had a meal on the table and clothes on our back, yet always seem to have something to complain about. However, I do believe it’s a good thing. People get sick of hearing rap songs about how much money the rapper has, and love songs about how beautiful being in love is.

S] You amalgamate electro, pop, rock and rap – can you tell us why you wanted to mix these styles and what inspired you?

LV] Well, I grew up listening to punk rock bands and as I got older my taste in music became more eclectic. I started listening to everything from funk and metal to rap, and growing up playing in punk bands that sounded like every other punk act out there – I really just wanted to start something that was somewhat original and couldn’t be pigeonholed quite so easily.

S] What are the themes that run through your material?

LV] I think the main theme, on my debut album ‘King Of The Kerb‘ at least, is street culture. Lyrically, I’m exploring the lives of the average Joes out there. These middle-class kids from the suburbs who drink too much, are knocked up at the age of seventeen and have no real ‘life goals’, and always seem to have a problem with their parents. You know, the kids who are always complaining about something. To a certain extent I suppose I’m one of them.

S] What was the best experience you had working with Ben Rosen?

LV] I’ve been working with Ben for about seven-or-eight years now on different projects. He is really the one who pushed me to do this sort of album, so if I had to talk about one particular experience, I don’t know where I’d start. His sonic and melodic sensibilities are so unique, we never know what will happen until we’re in the moment, so every day is an experience with Ben. The intensity can lead to hilarious shenanigans to let off steam – waking up to find him dressed as an Urban Cowboy was a pretty good one.

S] If you could have dinner with anyone, and listen to the music of Lucky Valentine, who would you pick and if you can tell us…what would you feed them?

LV] Probably Lindsay Lohan, so I wouldn’t have to feed her…

S] Tell us about the most difficult moments of your musical journey and how you came through that?

LV] Oh man, where to start. Everyday has it’s difficult moments; whether it’s being too broke to eat during a two week Japan tour or having the headlining band do their soundcheck through your entire soundcheck slot in Hollywood – there’s always something. I’m still not in the clear yet, but I’m still fighting the good fight.

S] How are you looking to develop the LV concept in the future both visually and sonically?

LV] Right now I’m really concentrating on ‘King Of The Kerb‘ and snagging a good label deal. I’m really trying to build up my online presence with sites like Twitter and Stickam. We’ve also got lots of YouTube stuff going on – I’m about to start doing a regular Q&A thing where fans can write in questions and I’ll answer them via video post. Visually, everything is in-your-face and instantly recognisable. Sonically, I’m having fun developing my music into a live format – which isn’t necessarily the same way you hear it on the album. My backing band are really doing a great job at executing the live version of the tracks.

S] Will there be an opportunity for you to tour the UK soon and what are you most looking forward to?

LV] Well, I just got back from LA where I did a label showcase at The Viper Room; if all goes to plan and a label picks me up I could be in the UK touring sooner than you know it! Seriously, I’ve never been to the UK before and would love to go. Most looking forward to, in the UK? Eating a scotch egg – I’ve heard stories about those things… they sound mean.

S] Is there a message to fans embedded within your sound that you think is essential to get across?

LV] I don’t think I consciously embedded a message into the songs, and don’t really want my music to be over analyzed. I kinda just want people to enjoy it as it is. The lyrics are pretty full on, and the beats are pretty sick – as long as people are singing along then I’m happy.