SPHERE magazine recently spoke with Nottingham-based goth rock band Luxury Stranger about the roots of the band and the themes and ideas behind some of their most striking material. Chris Ruscoe [bass], Simon York [vocals] and Paul Sycamore [drums] talk about everything from their local scene and new music to running down zombies with tanks… 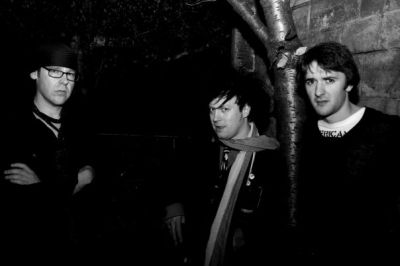 “I live and breathe this band” – Paul Sycamore

S] How do you feel about the dark alternative scene in the UK at the minute?

CR] Personally, I feel the scene has recently become rejuvenated. Whilst it has always been underground, it seems to me the last ten years has seen a fair degree of dormancy, which led many to believe that the scene had died. Whether it is a rediscovering of great musical influences, a re-evaluation of dark bands, or a sign of the times – our current, bleak environment, musical or otherwise – there has certainly been stirrings which I hope are signs of revitalisation. But we still have to get venues, promoters and listeners aware of it.

S] You are based in Nottingham, are you influenced at all by your surroundings?

SY] I would say that our surroundings drive us to taking our chosen path and hopefully reaching our goal. Yes, the moods and times in Nottingham may come up subliminally in my lyrics but at the end of the day even though we’re known, recognised and ‘respected’ we’re not officially part of a local scene (or at least no-one has told us) so a lot of what we do is independent of what’s happening in the city.

CR] Nottingham is a decent central base for us as it allows us easy travel north and south, but I personally wouldn’t say it has any great influence on me musically. In many ways, we try and distinguish ourselves from a Nottingham ‘scene’, so perhaps that’s a driving influence.

S] Do you see a difference between the scenes in the north and south?

CR] Why not East and West? The scene, as such, does feel more alive in the north, but perhaps that is more down to the continuing influence of those great bands that originate from there, somehow permeating our psyches, than a deliberate attempt to extend a shelf-life. There’s still the buzz of seeing a live band, and the enthusiasm a small scene can spread. There’s no doubt that wherever we play, there’ll be open-minded people who can see where we’re coming from, and that’s all we can hope for.

S] Can you explain the inspiration and events that led up to the creation of ‘Precious For Evermore’ specifically?

SY] The song’s meaning was influenced by aspects of the film ‘Peeping Tom‘ by Michael Powell and my own experience/feelings regarding the nature of art, sculpture and vacuum beds that are used in some strands of fetishism. After reading a website on latex and bondage fetishism, I imagined how the vacuum bed could be almost like an old picture – like in large halls or castles that you get in Rathbone‘s ‘Sherlock Holmes‘ movies. The idea that an old collector likes the idea of women (and men?) frozen forever in these frames in particular positions. I wrote the piece shortly after I’d recorded the ‘Desolation‘ album and had started to look for musicians to form the live band. I intended the song to be the first LS song that would be recorded using the live band but events occurred meaning I recorded it in the same way as ‘Desolation‘ and I had to wait until I met Chris ’till I could record with another LS member… this is what’s been exciting about working on the second album – it’s all real musicians rather than ‘me, myself and I’.

S] How does the new material you are currently working on represent Luxury Stranger’s sonic progression since ‘Desolation’?

SY] For me, it’s the progression of the sound towards what I always imagined Luxury Stranger to be… ‘Desolation‘ and the other songs I worked on for that album was finding the LS sound. ‘Precious For Evermore‘ was stapling it down – a confirmation if you will. The song titled ‘Completion‘ was the start of ‘true live LS‘ and the second album, ‘Commitment And Discipline‘, is a certification of what Luxury Stranger is and will be.

CR] Like most bands, there is the desire to get things nailed down on tape quickly, without necessarily letting the songs develop and breathe over time. I feel we’ve been wise to get a lot of new material rehearsed, tweaked and gigged (50 in 2009), and letting the sound grow organically before deciding on the final version. I am still constantly discovering new and old music that continues to influence my playing.

S] How supportive have your German label Major Records been in supporting you so far – what is your relationship like?

SY] The label has been good to us – I think we’re the only guitar-based band on the label so it’s new territory for them. They do what they can and we’re letting them know what we’d like… I suppose it’s a learning process for both parties. The relationship is very friendly so it makes it easier for us to e-mail them and say, ‘Oh we’re doing this’ or, ‘Is this okay?’ without any fear of ‘dodgy come-back’ that you’d possibly get from some majors and indies.

CR] Simon was previously signed to Roadrunner with a different band, so he has something to compare it to. There’s no doubt that being on the same label as IAMX, Mesh, Ladytron and Mechanical Cabaret gives me some private pleasure!

S] More than a lot of acts in the genre, you work hard to interact with fans online and in person – do you think that this personal interaction is something that is lost in the contemporary dark music scene?

SY] We’ve been told that we’re one of the hardest working bands in the midlands… certainly in Nottingham, but the midlands?! I think you have to have the personal touch. At the end of the day, we’re not gods or other forms of deities, we’re just doing a job and trying our best to get on to the next rung of the ladder just like everyone else out there – it just so happens that our ladder is arts-based and to some extent very public.

CR] I’d say that the current climate means anyone wanting to get noticed needs to do something different to others…The guerilla marketing Simon came up with (the business cards, the anonymous big-brother style poster campaign) was truly inspired, and has in a sense become part of what the band is, in image, style and performance. The online world is fickle though, so hopefully a memorable performance has greater staying power than a MySpace comment.

S] What are you most looking forward to about 2010 – you have dates booked for most of the year?

SY] Yes and we’re looking to book even more. The one thing that we can talk about that I’m totally over-excited about is our support slot in Holland with Levinhurst (Lol Tolhurst /and Michael Dempsey‘s project). It’ll be one of those milestones in our book. Sharing a stage with two of the original three imaginary boys – not just ‘famous’ people or a name that’s being thrown around at the moment… icons of both post-punk and to some extent goth and darkwave and electro music. I’ve got my fingers and toes-crossed that we get a slot one day with Depeche Mode – then I’ll definitely be visiting Madame Palm and her five lovely daughters.

S] How do you feel you have progressed personally through the music that you make since the project began?

SY] Well for me… at least I don’t have to argue chord changes with myself anymore. Seriously, I love the fact that I’ve gone from one man and an idea to three dedicated musicians and friends with a mission. And our time in Germany last December strengthens that thought – we went through an almost death-like experience over there and we stuck together, this is more than a business, it’s an extension of my family.

CR] Well, it has certainly given my life a clearer sense of direction – knowing that this is what I want to do, to get better as a musician and to get our name out there. Like many, music is the very centre of my life, an accompanying soundtrack to everything, in good times and bad. That journey continues at a somewhat frightening pace.

S] What does being part of Luxury Stranger mean to each of you individually?

SY] It’s my life… I need to do this. Luxury Stranger reflects my love for music, performance and music. Luxury Stranger is a band, it is theatre or a stage play, it is an art piece. I live for those nights when we rehearse, I look forward to every show – even the ones we’re not 100 per cent sure about why we’re there but people come and see us and see 100 per cent effort and passion. It also means that my insomnia will never be cured due to me now working two full-time jobs.

PS] Luxury Stranger is my life. I Live it and breathe it. Without it I’d be nothing.

CR] Commitment and discipline, minor and major: the path is the goal.

S] On a random note, if Luxury Stranger where in an epic action movie (soundtracked by ‘Desolation’ of course) and  were earth’s “last-stand” against an army of zombies – what weapon would each member of the band choose to defend themselves and why?

SY] An endless supply of meat products as well as brain and body parts… Reason being – Erm… distraction?

PS] A tank. If I run out of shells, I’ll just run over them.

CR] My Rickenbacker bass – certainly a hefty piece of wood that could do damage, sonically and otherwise.