Maleficent is an explosive mix of industrial, rock and avant-garde sounds – their fascinating stage show is second-to-none and sees the group blend elements of cabaret, ballet and fetish to achieve a striking yet glamorous result. Now in 2010, the band’s reputation is growing fast and they are looking to visit the north of England very soon. We chat with vocalist Maleficent Martini about her career as a performer, the band’s music and what’s to come for the rest of the year. 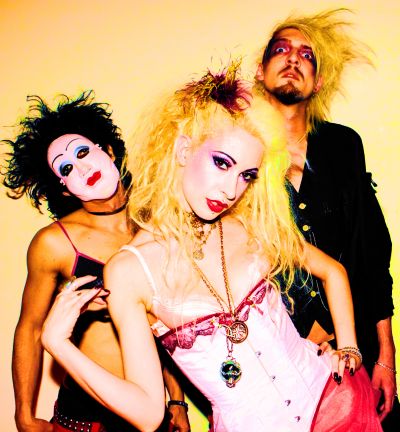 S] Your dance experiences have enhanced and inspired your live performance – when did you first decide to combine the two?

M] Well, I guess that’s always been in me but, probably, I decided to combine the two once I formed Maleficent the band with Mortimer Cain [co-vocals], which was in 2006. I really wanted to keep doing what I was most comfortable with but also be involved in music, so when I met Mortimer Cain and Dr Sickx [guitar] it kinda fell into place.

S] Do you have a favourite place to write and why?

M] It depends. Usually it’s when I’m at home, but sometimes I come up with something while I’m waiting for the bus, or perhaps while walking down Camden Canal, myself and Mortimer Cain write lyrics together, and sometimes he just writes by himself. Once that’s completed then everything goes back to Dr Sickx’s house where he creates the music to fit around the words – we combine all of this together before going down the studio.

S] How do your other professional roles (acting, ballet) influence your music and writing?

M] It always inspires me more, and makes me more creative – it’s a way of working that opens up your imagination and lets you be able to see things from another point of view.

S] What inspired you to cover Nick Cave’s ‘Where The Wild Roses Grow’?

M] It’s a song that all of us like, and it gives you taste of who we are from someone else’s  point of view. 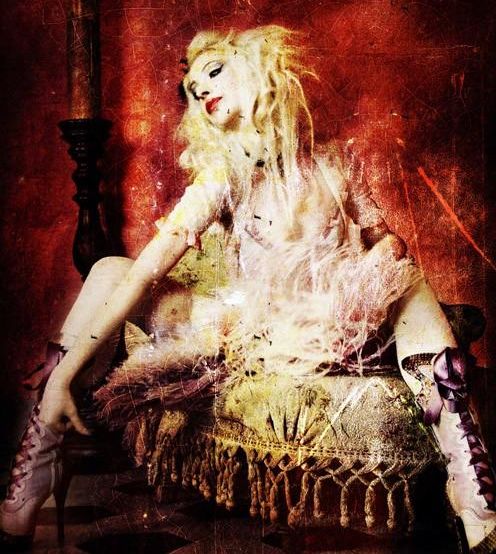 S] Would you consider your on-stage persona to be an alter-ego or simply an extension of yourself?

M] I would say it’s an extension of myself.

S] What advice would you give to anyone interested in getting into the performing arts world, be it dance or music?

M] Follow your dreams because they can become reality if you work for it and never stop learning, and never be afraid to ask people for advice.

S] In such a difficult time for musicians within the alternative genre, what keeps you inspired from day-to-day?

M] Every time I’m on stage and I’m so happy and grateful to be there, I’m doing exactly what I wanted to do in my life, mixing ballet, music, art and fashion together, so, even if  it is hard sometimes, just the fact of recognizing what I’ve learned and achieved makes me want to carry on.

S] How is your inspiration different when you are headed into a live performance with your band in contrast to your work as a solo performer?

M] I think that band and solo shows are pretty similar and related as sometimes we start writing a song based on a choreography I have in mind.

S] Do you ever get nervous, if so, how do you get past that feeling?

M] It’s more like been excited. I hate waiting between soundcheck and a show, as I just can’t wait to get on stage. I get more nervous when I have to do something related to ballet and the bondage suspension, as I worry something could go wrong and I could get injured, and I pass that feeling by being by myself in the changing room and stretching.

S] On a similar note, what has been the biggest challenge that you have had throughout your career and how did you overcome that?

M] I think every time I put on a Maleficent event is where I get the challenge. It’s all about trying new things, and there is always the worry you haven’t done enough to get everyone to know you’re performing and that there will be a crowd to appreciate it.

S] What inspires your passion for industrial music?

M] The sound, and raw emotions it makes me feel.

S] Each member of the band seems to have a persona and a very distinct personality – how well do you bond personally and professionally?

M] We are good friends, and we know each other pretty well right now, so we know how to deal with one another and our needs.

S] From the videos you have worked on so far for Maleficent, which one have you most enjoyed working on and why?

M] They were both really fun to do – we did both videos with David Kenny and it has been great to work with great artists and designers and finally see my ideas becoming reality. ‘Malice and Desire’ was relaxed as we did it over a weekend and it was a kind of adventure, dancing in the cemetery and then in the club with all the sexy girls and boys. It was brilliant and we might of got carried away a bit to too much – that footage didn’t make it onto the final edit.

‘Where the Wild Roses Grow’ was amazing as we spent a whole week in this early 1900’s villa with a swimming pool and a bar and our own chefs in Tuscany, eating good food, drinking good local wine and more. We had Robert Masciave doing our hair and Bea Sweet doing our make up. I had the chance to wear for the first time Natacha Marro’s shoes (she’s actually sponsoring me with all her marvellous shoes) , and wearing FlutterByDaisy, Victim and FreakyZDesign clothing, and we had some of our closest friends over there so, it was a great experience.

S] A lot of your work is based down south, so for our readers, what are your best experiences of the north of England?

M] I think that probably Nottingham has been the furthest north we’ve been, we would like to go further up, I did ballet shows in Newcastle once but I have not yet been with the band.

S] What are you most looking forward to achieving in 2010?

M] Finish our new album and starting to tour Europe, even if it seems that it  might take a while as we are in April already – and we would like to start working on a new video too although it’s a hard choice between the new songs.