Spotlight: Melody Of Your Demise

As those of you reading may be aware, York band Melody Of Your Demise have split opinions here at Soundspheremag HQ with the release of their new EP, but in the spirit of celebrating hard work and decent heavy music we speak to the band’s co-vocalist Chris Kendall about the music, inspirations and ideas behind this dedicated metalcore six-piece. 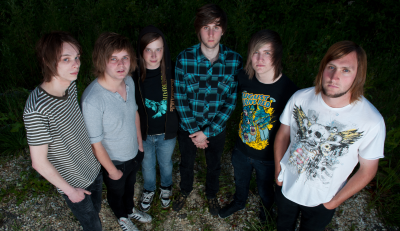 S] Tell us about Melody Of Your Demise, how you formed and what your goals were at that time?

C] “Our story isn’t that interesting to be honest, but since you’re asking! Me and our other vocalist used to work together and we just got talking about starting a band. From there I asked our bassist and our old drummer to as we’d also spoke about starting bands and I knew they had wanted to in the past. Joe knew Craig already so got him in on lead guitar. The second guitarist was a bit harder to find but we eventually found Jonny. Then our original drummer wanted to leave, he didn’t have the time to practice and metal was never his main interest with music from the start so he decided it wasn’t for him. As it happened James had come to watch us practice a few weeks earlier being good friends with Jonny so he stepped in on drums. To be honest, we had no real goals. We all agree we’d never imagined we’d ever get any sort of gigs, so looking back we’ve already far surpassed our expectations. Now we’re more organised and are looking at getting more big shows outside of York.”

S] What’ve been some of the major challenges that you have faced as a band?

C] “Finding the time to all get together around work and other commitments never ceases to be a pain in the arse!”

S] What’s the writing process like – where do you draw inspiration from – can you be out and about, or is it very studio-based?

C] “We used to write separately, someone would bring something to practice and we’d add everything from there. Recently though we’ve started writing stuff together and definitely noticed the material is better. We’re yet to play most of this stuff and hope to record it later this year, so it’ll be interesting to see if everybody else agrees! It’s heavier but we’ve tried to keep some melody in there!”

S] What do you enjoy most about performing live in contrast to being in the studio?

C] “Live is always fun, you can get away with doing what the hell you want – I can jump around and climb on stuff! We love playing live!”

S] Is there a song from the new EP ‘We Call The Shots’ or in your repertoire that you feel perfectly defines MOYD right now?

C] “I guess we never meant it to but ‘Arrogance Is Bliss’ has managed to get us a reputation that it was never intended to. But I guess I can understand why people have made certain assumptions from the title and lyrics but the song isn’t about us and, or our attitude! In terms of what actually defines us from the EP…I couldn’t choose one track. The new stuff is way better. It’s still metalcore but heavier. The first song for the new set we wrote is actually called ‘Where We Are’ – that’s the song that defines us right now! But I guess people are going to have to come see us live to hear it until we get round to recording again!”

S] Your song titles are delightful – are they meant to be tongue-in-cheek?

C] “Yeah they are. Anyone who takes them seriously has totally misunderstood us!”

S] You’ve had some great support slots so far, what have you learned from the bands that you have worked with?

C] “Be nice and stay grounded. The bands we’ve taken the most from are always the ones that took the time to chat to us – those are always the gigs you walk away from having better memories.”

S] You have put a number of your songs up for free download in the past – why?

C] “We just wanted people to hear our music and be able to have it on their iPod. Like I said earlier we much prefer playing live and I’d rather people know our music than have money in our back-pocket.”

S] What do you think of York’s metal scene currently?

S] What’s the band dynamic like? Are you all the very best of friends, and does that help you work together?

C] “Yeah we’re all pretty close. We don’t see each other that often outside of the band mainly cause we live distances apart or have other commitments but when we do spend a lot of time together we always have a really good time. Sometimes that doesn’t help though when we’re trying to write or practice and just end up pissing about!”

C] We’ll have to see. There’s noting specific planned. We have just written an almost totally new set which we’ll be playing when we start gigging again this month. We are also looking for more big gigs in Leeds, Sheffield and other places.”