In our latest ReverbNation spotlight, we chat to Matt Ezzo of Nonstop To Cairo. 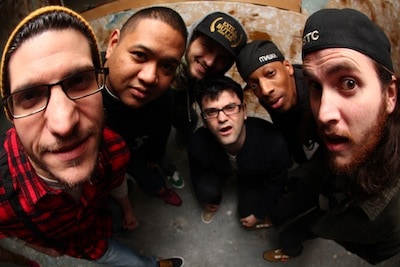 M] “Even though the band is all from the same hometown, Nonstop to Cairo is made up of six very different people. Musically our inspirations vary from Mozart to Mystical. Nonstop thinks that there is something worthwhile in every style of music.  We try to incorporate a little of everything into our songs. With that having been said, the boys do agree on some specific inspirations like The Specials,  Fishbone, Sublime, The Beastie Boys, Damien Marley, Biggie Smalls, Weezer and The Red Hot Chili Peppers to name a few. There are also some newer artists that have made an impression on us like Cage the Elephant, Santigold and a fellow Faction band, Wax.

In addition the boys of Nonstop give a lot of credit to their parents for sparking their interest in music and the teachers they had, in school or private, who nurtured that interest and made six fully functioning musicians, now ready to tackle this industry.”

M] “For the most part, Nonstop To Cairo’s songs are started by Nick Diamond (guitar/vocals) and myself. Usually a riff or a few parts will be brought to practice and presented to the rest of the group. After that the band breaks it all down, jams it out and completes the idea together. It’s very rare that a complete song is written by a single band member.  While some bands may start off a song with a lyrical idea, Nonstop To Cairo tends to focus on the sound and vibe of the instrumentation first.

The individual inspirations for new ideas can start in any number of ways. One common way is being inspired by other music.  One of us hears a new song or even just a simple riff in a song that can spark an idea.  It makes you think outside the box when you’re open to any style of music. We are a funky, rocking ska band, but it’ll make for a very unique sounding song if the idea was inspired by a progression in the French Horn part of a John Williams’ score.  Ideas also can come from things that are happening around us while at home, on tour or just partying with friends.  Nonstop To Cairo’s first single ‘Eva On The Rocks’ is about how a friend of the band fell in love with a girl while on vacation in Iceland. He had to leave her there and come home to New York. The song is about how our friend tried to convince Eva to move to New York City.”

M] “The band is always writing and can have up to ten new songs being worked on at any given time. With every new idea, the band’s style evolves a little bit.  Nonstop’s sound has been explained as ‘having a chill groove’ to dance to, underneath fresh, gritty guitar and vocals.  Of our previously released songs our single ‘We Be’ best portrays that balance. It has August’s rhythmic, driving vocal patterns playing off Nick’s soulful and powerful voice; all set to an energetic, funky back beat. That’s Nonstop To Cairo’s sound.

How about a Soundsphere magazine exclusive for you?  Nonstop to Cairo will announce here for the first time that within a few months the band is releasing a new single.  It will be released on satellite radio, with a music video to accompany the debut.  This single, titled ‘9 To 5’, is a raucous party song about the everyday working man, who needs to bust out of his monotonous life, let loose and go mother f’n crazy!”

M] “You gave us The Beatles. Enough said. Seriously though, Nonstop To Cairo desperately wants to jump the pond and party with Europe!  All we can say is send your love our way.  Nonstop can be found on almost every social media network and all it takes is enough “likes” and a few comments to convince our management team and label of booking a European tour.  Let’s be honest, you keep it real in the UK.”

M] “Expect to never forget it. There are thousands of great musicians out there. There are only a few truly great performers. These performers separate themselves from the pack and bring it on stage.  Nonstop to Cairo would like to believe we are one of those or at least that we strive to be.”

M] “Nonstop To Cairo is on the ups for sure. It seems at this point that every day there’s more good news which, ‘knock on wood”, will continue. Of course even with that being the case there is always hardships that come with this lifestyle. Entertainment is a demanding industry.  It takes all of your energy, time and money just to stay a float. That doesn’t leave a lot of you left to give.  One of the hardest challenges for us personally, is finding time for family and friends.  Everyone in Nonstop cherishes those relationships and above all would like to thank our loved ones for what they sacrifice while supporting us.

Another big challenge for us is music business. Putting aside being good or bad at business, every artist struggles with the balance between the art and the industry.  How do you make yourself marketable, while retaining your unique voice and artistic identity? No-one sets out in the arts thinking about the money. It’s usually because the person or, in this case, persons have a creative need to satisfy.  The only way to satisfy it is to keep creating. The music industry can help set new artist up with the life style necessary to be a creative type, but the industry needs money to do that. If we can be a good product, than we can have the freedom to create our art. It’s a tough situation to get a handle on.”

M] “Nonstop To Cairo has big plans for 2013. A few big tours are in the works for the spring and summer. New songs are being written and recorded as we speak.  New music videos are in pre-production right now and slated for release in early 2013. There are also local and national TV shows interested having us as guests. To make a long story short, if the world doesn’t end, than Nonstop to Cairo plans on taking it over in 2013.”