In our next Yorkshire-based band spotlight, we shine a light on Krautrockers nschlfn. John Tuffen and Ash Sagar talk to us about the band’s inspirations and ideas. 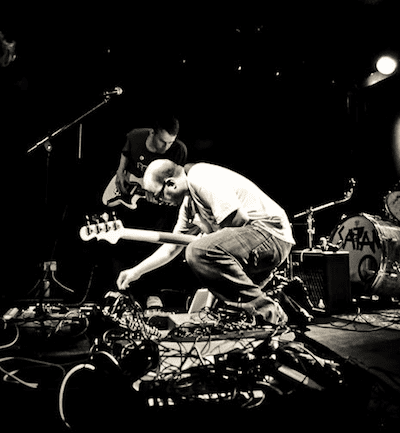 J] “At the moment, it’s nschlfn (although it’s still pronounced neuschlaufen), mainly because people kept misspelling neuschlaufen (often as “neuschlafen” which translates to “new sleep”, not quite what we were after). The name change happened when original drummer Steve Carter left, and I wanted to differentiate the line-ups – without a drummer we changed to more of an electronic- based sound. Besides, Steve took all the vowels with him.”

S] What were the main reasons you created neuschlaufen?

J] “Steve Carter and I had been talking about a new musical project for years (we were in a group performing electronic music around Yorkshire in ‘96-’98 or so) and we have a shared interest in early ’70’s German music so the motorik idea was pretty high in our minds. Having talked about it for a while and mentioned it to a few people, Joe Coates basically called our bluff and offered us a support slot at The Duchess in February 2011 – and that was that!”

S] You’ve been working on this project for a long-time John – how have you changed and developed as the music has progressed?

J] “We’re now on our fourth line-up – one gig at The Duchess earlier this year was Ash’s first and Steve’s last and we introduced some songs which didn’t rely on the computer recording loops. The band sound/dynamic changed when Steve left – Ash and I started exploring a more Cluster-like sound, more textural and electronic  – also tending to be even more improvised. Now Laurence has joined and we have a drummer again I expect we’ll get back to a more physical sound, although the electronics will still be there.”

J] “We have backgrounds in all sorts of music; bits of classical, jazz, 20th century experimentalism as well as more contemporary stuff. We’ve developed a fairly improvisational approach to our music where there are riffs – and in some cases lyrics – but they are more like guidelines, coming alive and mutating in front of an audience. At the moment we’re in another transitional stage, it took a few months for Ash and I to get to know how to play together and the same process is happening with Laurence – we’ll get there, we just need to play out more!”

S] What sort of things inspire you – any particular themes or ideas?

J] “Not anything in particular; I would like to be able to rage against the injustices in the world, but I’m not articulate enough to write such lyrics – you know the sort of thing – the unfairness of the capitalist mess we find ourselves in – the ‘I’m alright Jack’ mentality which took hold in the ‘80s and is now unfortunately embedded in the nation’s psyche). I really feel that we, as a nation, need some sort of proper revolution; the current politicos are just fighting for the centre ground without actually doing anything worthwhile. There seems to be no-one actually standing up for anything – when the Labour movement was founded in the early 20th century, there was a real feeling that the nation could be a supportive place and there would be a rosy future; that’s now all but disappeared: divided up and sold to the highest bidder, services run into the ground, privacy being rapidly eroded; sold to us apparently for our own good, but in reality the state grips us just that little bit tighter. I have an uneasy half-thought that perhaps entertainment is just another form of control, and we’re all just being used. So yeah, maybe there’s a bit of pent up anger or frustration in there somewhere!”

S] How has the band dynamic changed over time, John, you’ve always been at the centre, correct?

J] “I don’t really consider myself to be the centre, the other members of the band have more musical knowledge and ability than me that’s for sure! I suppose that it’s become de-facto ‘mine’ because I’ve been the constant member. When we started, it was the computer which was in charge; I’d set the tempo, Steve would listen to the click and drum, and I’d layer the loops into the computer. Now I’ve updated the software to allow tempos to vary – and moved away from playing to a headphone click. The dynamic changes with the personnel, I’ve always loved collaborating with people (whether making music or producing), and there are always new and interesting ways of arranging sound waves – nschlfn allows us to play with sound in front of an audience, often we don’t have a set-list and just play what feels right.”

S] What is the band’s mission?

J] “I’m not sure that we really have one – I think that whatever we do, we’re not going to be followers of any trends; we’ll keep making the noises that we enjoy making and if people enjoy that, then that’s a bonus. I think that the most important thing in any creative endeavour is to do what you enjoy doing; as soon as you stop doing that and start trying to please other people then it’s a slippery slope to not pleasing anyone…”

S] Talk to us about Namke Communications and your plans for that?

J] “Namke communications has been running since about 2001 (originally namke was Damian Murphy and I: we got together for the first SightSonic music festival and played at the opening event). It was intended as a sort of record label (I was performing under a different pseudonym at that point), but people started putting namke on posters, so it stuck. Namke Communications was intended an umbrella label for my photography and video/CGI as well as the music, but at the moment the music is taking precedence over the other stuff (having said that, I just put together the video for Fawn Spots’ single Spanish Glass). There’s also minimism.com – which I’d like to be a sort-of-net-label; at the moment it has a load of freely-downloadable tracks from my various projects.”

S] If you could craft a Frankenstein’s monster around the neuschlaufen sound – how would you build it? The head of Neu!, the arms of Kraftwerk…for example?

A] “We have the stomach of Can, the big toe of Cluster and the elbow of Tangerine Dream.”

J] “Well, I’d like the legs of Neu!, the arms of Can, the head of The Pop Group, the spleen of Loop, the serenity of Cluster. I’d probably go for the robotic body of Kraftwerk too…as well as some odd bits of Mark E Smith.”

S] What’re your plans for the rest of this year, and into the next?

J] “At the moment we’ve only got on gig lined up before the end of the year (Her Name Is Calla at Stereo on December 12), and we really need to get some recording done – all we have at the moment is an archive of live recordings (I’ve just put up a release on Bandcamp in a vain hope to be able to raise some money for recording, but it’s very early days yet). We need to find the right producer perhaps?”