Rabbit Junk are a supreme amalgamation of electronic beats and pure metallic fury. Created by JP Anderson, formerly of cult Industrial group The Shizit, together with Sum Grrl, the band have created quite a reputation for themselves on the Stateside Alternative scene. We chat to the group’s mastermind about his plans for the future, and some of his latest ideas. 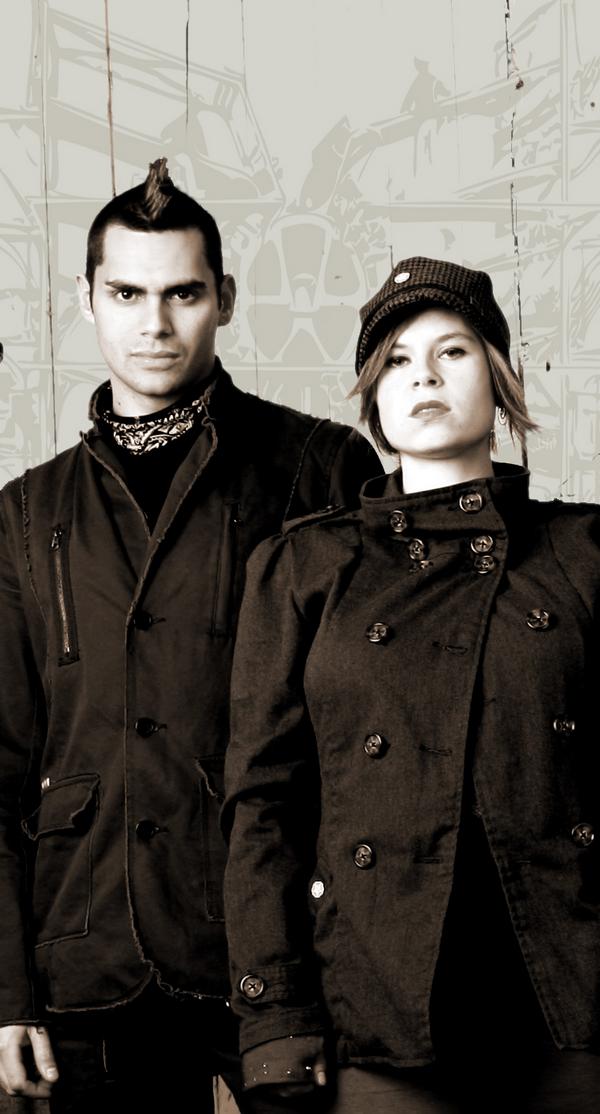 “I don’t believe I have a core personality, I’m just an expression of whatever I’m doing at the moment”

JP] I’m finishing up my work on Project Nonagon, which has nine new tracks. These will be released as MP3s only, for free. This continues the concept of the last Rabbit Junk full-length release ‘This Life Is Where You Get Fucked’. I’ve already released the first three tracks, which anyone can download for free from the website – just follow the link to Project Nonagon. The next releases for this project will be three H.P. Lovecraft inspired Black Metal and Hip-Hop concoctions that incorporate a narrated sci-fi horror short story. It’s wild stuff. I’m also planning on putting out EPs and at least one full-length for my other projects besides Rabbit Junk this year. I expect to have a very special project completed this summer that should surprise people, but that’s all I’ll say about it right now.

S] You have three different projects that are completely separate in terms of the sound – how is your mindset different when you compose for your other endeavours like the pirate-metal of Wolves Under Sail and the progressive Fighting Ice With Iron?

JP] Even though RJ is a very diverse sounding band, it is still too confining to satisfy all of my musical interests. So I started writing and recording tracks for new projects as well. Wolves Under Sail. allows me to express the raucous party side of me while Fighting Ice With Iron explores the exact opposite. I guess I’m post modern in that I don’t believe I have a core personality, I’m just an expression of whatever I’m doing at the moment. It’s a liberating view of ‘the self’.

S] How and why did you come up with the concept for Project Nonagon, and will this be how you release the majority of new material now?

JP] I knew I wasn’t going to able to finish exploring the concept of ‘This Life…’ in just nine tracks, but I had to get the record done and out. So I decided to follow the record up with another nine more free tracks after it was released, continuing ‘This Life’s’ direction. In fact each section of that album has a sequel in Project Nonagon. I feel done with CDs now. I like MP3s and vinyl. I don’t know if that’s how the majority of Rabbit Junk will be released from now on, but certainly all the new projects are most likely going to be free MP3s in addition to collectable vinyl. I really dig those packages that are a record, MP3 card and a CD all in one. And I really love giving away music, it creates the best vibe in the creation process. I don’t like the business side of music very much.

S] You toured a long time ago with Alec Empire in the UK as part of The Shizit – can you tell us what you most enjoy about being in the UK?

JP] I used to live in the UK, my Mum is English. I lived just outside of London in Fleet and also in Dunoon, Scotland. British culture is a big part of my family life. Heinz beans and kippers are my ultimate comfort food. I prefer British television and British girls. I think the UK is far more charming than the US. I love to go back and live there.

S] How will the themes on the new album move away from ‘This Life Is Where You Get Fucked’?

JP] The next RJ record will be a concept album, but I haven’t decided on exactly what yet. There’s lots of ideas that I have been thrown around, like coupling the album with a Steampunk comic or making the album a story where each track is chapter one, two, three, and so on. It definitely won’t be boring. RJ is all about experimentation and exploration. I’ve also thought about taking the sections of ‘This Life…’ and creating stand alone bands from them. Most people seem keen on the idea of a full Ghetto Blasphemer release.

S] You have some great contacts, so can you tell us about any guest spots you have on this new record?

JP] Since I’m pretty far away from getting down to recording a new Rabbit Junk album, I haven’t nailed down any guess spots. But I’m sure the usual suspects will appear.

S] How do you intent to expand Rabbit Junk visually this year, through video and out live, as you have had some pretty interesting ideas in the past?

JP] I still want to make a video for ‘Holgate’, but the process was bogged down by a myriad of delays and I took a break from the idea for a while. I hope to work with more animators and get some fresh video done soon.

S] If you could get anyone, dead or alive to join you for dinner and to listen to Rabbit Junk, who would it be and why?

JP] I’ve been on a classic sci-fi horror kick recently, putting together these new tracks for ‘Ghetto Blasphemer II’, so I would like to have H.P. Lovecraft and Edgar Allen Poe hang out. I’m not sure what they would make of Rabbit Junk, but it would be great to get their impressions.

Check out the video for ‘In Your Head No One Can Hear You Scream below: