As part of our latest Reverbnation spotlight, we speak to Wily Bo Walker from London-based band Rattlin Bone. 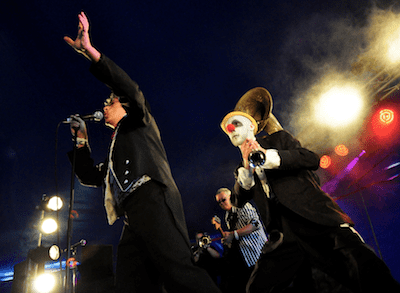 BW] “Well there is a real N’awlins [New Orleans] spirit within the band – those funeral marching bands with all the brass players blowing up a storm. Mix in some Delta Blues and then a sprinkling of some of those old foot stompin’ jazz rhythms. Add a touch of rockabilly in to the mix and there’s your Rattlin Bone sound!

Louis Armstrong, Cab Calloway, Howlin Wolf, Screamin Jay Hawkins, even, dare I say it, Tom Waits. We have had a few reviews comparing us to the great man so, Flaming Hearts Records even went to the trouble to licence two of Tom Waits’ songs for us to record. Been a lot of fun I have to say. Screamin Jay is another obvious one I guess – we have a cover version of one of his tracks that we have licensed to record, but we’ll see.

Most of the stuff we do is original, of course, and even when we do a cover version we like to ‘rattle it up’! Plus L’il Neill digs Ennio Morricone so you can hear touches of haunting spaghetti western themes through his bone playing! Cinema soundtracks to b-movie horror flicks perhaps? Got to be in there. Certainly some of the keyboard parts I have laid down in the studio sound as if they would be right at home there – can’t say I am the world’s most competent keyboard player but I get by – Much more in my element when it comes to doing my frontman and vocalist thing. I look back at some of the old videos of people like Cab Calloway and Louis Armstrong and love what they were doing back then! But I obviously mix it up with a lifetime of influences as everyone does.

Music is so abundant and readily available now that there is so much to inspire – I might not be inspired by the boring mainstream syndicated radio stuff everyone is told to like but there are tons of bands and artists out there producing up brilliant music that is both innovative and inspirational.”

BW] “We’re a drinking band! So there is a real celebration of the demon alcohol! That aside we look at various musical styles from Eastern European, through spaghetti western to N’awlins via delta blues and gypsy sing-along! Death is always in there somewhere…but more as a celebration than something to fear and dread. Very much along the lines of the Mexican ‘Dia De Los Muertos (Day Of The Dead)’ – we celebrated that festival last year with our release ‘Who Do You Love’ and some of the artwork we produce has definite ties to that Mexican culture and feel.”

BW] “I think ‘Rain On My Footsteps’ is the track that kind of sums up Rattlin Bone – a big sound from a very simple song; almost cinematic. Most of the songs we do are story-based so we use the music as a soundtrack to that story and build it from there.”

BW] “We have been so well received everywhere we play – everyone is so cool. Always keen to work with artists or film-makers. We have recently been asked to provide the musical backing for a burlesque movie which is cool. So if anyone has a project that they might like Rattlin Bone soundtracking get in contact! The same goes for art – if you have some art you think might tie in with our music get in contact and perhaps we can collaborate or do a music/art collage type thing – anything really! The same goes for musicians really – we have a big house, and there is always room for working with other musicians.”

BW] “A big show! We can go on stage sometimes with 18 people – we have had fire-eaters, beatboxing devil clowns, dancers, the fabulous “Vampirettes” on backing vocals as well as a veritable trombone army! Even in the smaller venues we try and put on as much of a show as we can. We play festivals through to dingy clubs through to theatre – each show is different but is always energetic and, hopefully, a lot of fun. For the smaller gigs we obviously have to reduce the band size right down but the primal simplicity of the songs work on that level just as well.”

BW] “I think the biggest challenge right now for us is the same that every single artist is going through – how to compete and thrive on a global level. Loads of obvious sites are out there for networking and displaying your wares, so to speak, but it’s very difficult for bands and artists to make a real splash. So I guess it’s coming up with ways to get noticed – to be dynamic and interesting and relevant in a way. That said we do this because we love it, love making the music and putting on a show so, I guess it’s a positive problem to have! That and where’s the next drink coming from…that’s the big challenge!”

BW] “Well, I am writing the second album which will be called ‘It’s Been a Wonderful Life…’. So once that is ready we’ll record and release that and tour… watch this space! That and to finally get sponsored by Jack Daniels – a small goal in life! But an important one to achieve, I feel!”