In our most recent spotlight, we talk to the astonishingly gifted talent, Rory Hoy. Rory talks to us about his musical influences, highlights of 2012, life with autism, and of course, his fantastic DJ work. 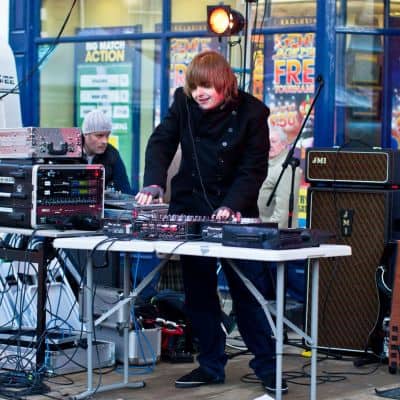 R] “My main musical influences are Fatboy Slim, and the rest of the Dance Artists from the Big Beat era such as The Chemical Brothers, and also people like Freddy Fresh. My other main inspirations are The Beatles, Mr. Scruff, DJ Cam, Stevie Wonder and the under-rated Del Shannon. As you can see, I have pretty eclectic tastes in music!”

R] “Loads! I’ve just recently won the Yorkshire Young Achiever of the Year Award in the Arts Category. This was hosted by ITV Yorkshire, and sponsored by the Yorkshire Evening Post, so I’ve had a lot of TV, Radio and Press coverage. I won it alongside the actor Mikey North who plays Gary Windass in Coronation Street!  I have had loads of different releases this year on various labels worldwide that have included EP’s collaboration releases, compilation appearances and a lot of remixes for other people. Gig-wise, I have done quite a bit this year including Leeds Festival, Manchester Pride, York Carnival and Oxjam. This coming Friday [December 14, 2012], I am finally meeting my Idol, Norman Cook (Fatboy Slim). Overall, 2012 has been some year for me.”

S] What would you say that your biggest challenges are on a daily basis?

R] “It’s actually a very difficult question. I can sometimes get intense and hyperactive when I’m very excited and I do pressure myself to do things all the time. I can be a real workaholic and when there is no work, I always create some! I find a lot of normal everyday things challenging, but I try hard to overcome any difficulties.”

S] What about personally, what kinds of themes and ideas can inspire your material?

R] “A lot of my material’s themes just happen on the spur of the moment as, when I make a track, I’m never too sure how it’s going to turn out. I just get these ideas in my head and I have to work on them straight away! It can be triggered off by anything!”

S] Do you have any pre-gig rituals?

R] “I always check to see how the punters are feeling about the previous act. If they are not feeling the act before me, I have to really come in with a bang – the same pressure applies when the punters are really enjoying the previous act. The worst is when you are the first act on, as you really have to draw the crowd in. A swig of Irn-Bru always goes down well and helps me!”

S] Do you get nervous, and how do you combat those nerves?

R] “It all depends on the gig. With small, local gigs I am usually relatively calm, but if it’s a big festival, I can sometimes worry about how it’s going to go but usually the gigs go great.”

S] What’s the music scene like where you are in Knaresborough?

R] “A music scene in Knaresborough is an oxymoron, there is none. Still, I’m friends with a good 1960’s covers band The Diamonds who are from Knaresborough and they gig regularly in the pubs, but there is no scene as such. I did a DJ Set at this year’s Christmas Market in Knaresborough which was great and I’m doing it again next year hopefully.”

S] What track that you are working on right now best defines your sound, and why?

R] “The latest tune I’m working on is a collaboration with Kitten & The Hip, an Electro Swing duo with Ashley Slater (of Fatboy Slim’s Freakpower fame) and Scarlett Quinn. It’s a Mark Ronson-esque Northern Soul banger with a pop-edge, kind of like a Jessie J doing Jazz-Funk. The reason this defies what I do is because it puts all of my musical influences into a melting pot and mashed together harmoniously. It’s also quite different from what I’ve done before, which was a good challenge.”

S] Do you have a message for any fans around the world?

R] “You are all awesome – thank you so much for supporting me all these years! I really appreciate all the great comments I get and love meeting fans!”

S] What about a message to other creatives with Autism?

R] “Never give up and trust your instincts. Just believe in yourself, that you can make a difference and try and go out and realise any dreams you have. Sometimes you can surprise yourself with what you can achieve with self-belief.”

R] “Basically, a typical Rory Hoy show is just me and my Mixer and Decks (or CDJs), but to spice things up, I try and put on a show as much as I can during the mixing. I like to involve the crowd and I dance around. I’m a very lively and energetic performer, as I love it! Depending on where I play, I try to be as musically eclectic as possible, within reason, so expect a mixture of nu-funk, big beat, breaks, house, classic funk and soul, 60‘s rock, golden-age hip-hop, electro, acid and even sometimes dubstep.”

R] “Hopefully finish the fifth album in time before the end of the New Year and do as many gigs as possible. One of my dreams is to do a special record to help raise Autism Awareness with somebody more famous, but because of everything that has gone on, I have never got round to making this a reality. Hopefully in 2013, I’ll finally get this project done!”