In music, as in life, there’s always a place for irony and if a little self-deprecation can be worked in too, well, rarely is this a bad thing…Example? Glad you asked, actually. Let’s take Saint Jude. As well as being, allegedly, one of Jesus’ twelve apostles, he is also revered by the Catholic Church as the patron saint of desperate cases and lost causes… 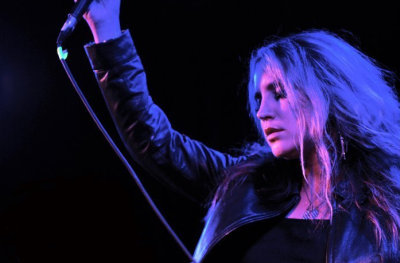 Have you joined the dots yet? No? OK, we’ll spell it out for you: there isn’t even a hint of desperation or the merest whiff of the lost cause, about the Saint Jude currently creating an almighty buzz both within and without that business we call ‘music’.

Formed and based in London, the band have risen rapidly over the last couple of years and following 2010’s critically acclaimed debut offering, ‘Diary Of A Soul Fiend’, produced by none other than legendary Stones knob twiddler, Chris Kimsey, Saint Jude are now perfectly placed to make the leap to the big time.

Prestigious slots at, among others, this year’s High Voltage Festival, saw fresh bodies flocking to the cause of their rootsy bluesy rock ‘n’ soul. Y’see, good though ‘Diary Of A Soul Fiend’ undoubtedly is, excellent, even, it’s as a live act that Saint Jude really enthral. Spearheaded by the ferociously talented Lynne Jackaman, they’ve been likened to Janis Joplin fronting The Faces and their songs simply beg for the space and energy of live performance. Unsurprisingly, then, Ms Jackaman places live performance right at the heart of Saint Jude’s existence. A point she reinforces when Soundsphere catches up with her…

“‘Rock ‘n’ soul, I feel, is a great caption for Saint Jude. We all come from very strong musical backgrounds and influences and I love rock and grew up on a diet of blues, jazz and soul. Love it all! We love music from the 60s and 70s as it was full of great melodies and passion in the music. A true band to us is only as good as they are live.”

All great bands are gangs. A tenet that, by now, has almost assumed the status of the eleventh rock ‘n’ roll commandment and it’s no surprise to learn that Saint Jude are one such collective. The line-up is completed by Marcus Bonfanti and Ivor Sims (guitars), Elliot Mortimer (keyboards), and Lee Cook (drums) and as Lynne puts it, “The band grew very organically. It started by a couple of us writing a few songs and grew from there, we were all London-based but now have an awesome bassist from Canada [Scott Wiber].”

In keeping with the gang ethos and despite Lynne being the band’s focal point and driving force, there is an egalitarian culture within the quintet, perhaps best reflected by their method of song-writing. As Lynne explains, “There is no set formula. Sometimes just me and the guitarist get together and write an idea and then take it to the band and sometimes we start with a simple riff or idea in rehearsals and then form a song from there. Whatever works and gets the best result.”

So, you’ve got your band, you’ve got a cool image and a collection of finely crafted and irresistibly soulful rock ‘n’ roll songs. All you need now is a mega-famous, legendary producer, right? “Chris [Kimsey] has been a fan of the band a while and loves the way I sing and the way the band plays so we decided to all unite for our debut album, ‘Diary Of A Soul Fiend”. Simple then…

So far so very good and you’d be forgiven for thinking a little time out to savour recent accomplishments would be the order of the day. But not so. There isn’t a lot of time factored into the Saint Jude itinerary for chilling and smelling the roses. Onwards, upwards and further forwards as the determined singer firmly states, “Next step is to release an EP with some new material and then to release our second album next year. We won’t release it before we feel it’s the best it can be. We are also sorting out a UK tour and plan to tour as much as possible next year, as for us it’s all about the music and the fans.”

The world has become a better, brighter and certainly more soulful environment with the advent of Saint Jude and this ain’t a band that fits naturally into the space normally reserved for underdogs; they’ve got the goods to be global. So get a little soul into your life and catch ‘em live while you can still see the whites of their eyes.