For our latest artist spotlight, we chat with Middlesborough’s Samantha Durnan who blends a mix a current acoustic music with rock and pop influences. Local radio stations have been giving her a lot of airplay recently and she’s been well received on the local circuit. 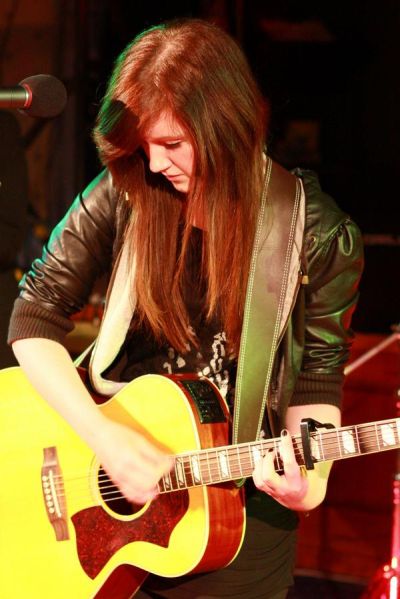 S] When did you start playing guitar and what made you pick it up?

SD] “My dad was an influence because he plays flamenco guitar, I was only around eight or nine when I first started but I found that I really enjoyed it. I started songwriting virtually straight away, only a couple of months after I had my first lessons. I was taught by James Henderson and when I showed him one of my songs he said that I had to record it. I just got a buzz from the whole recording process. I play electric guitar as well as acoustic, it’s easier to play but when I’m performing, I use an acoustic most of the time. In my band I have a lead guitarist on electric so it’s normally enough for me just to be on acoustic.”

S] Who are your biggest influences?

SD] “I’d definitely say it’s KT Tunstall, I like listening to a lot of female acoustic artists but not really so many bands.”

S] How do you go about writing your songs?

SD] “I can never really just start with lyrics, I always need to have like a melody or tune. I don’t sit and just go ‘I’m going to write a song’, I’ll start playing guitar and then it will come to me.”

S] You are also a keen drummer, do you write the drum parts too?

SD] “I’ll usually write a part and say ‘play something like this’, he’ll just come up with all the fills and put his own style on it, he’s a really good drummer.”

S] Do you prefer playing on your own or do you enjoy playing with your band more?

SD] “It’s nice playing on my own just doing acoustic sets but I love playing with my band. I definitely prefer it, it’s just the energy on stage and sharing it with other people, you really get to bond with the other members when you’re all on stage. I like doing smaller intimate gigs because you get a nice atmosphere, but playing larger gigs is so much better you just get a buzz and when there’s a large crowed it’s like ‘I’m gonna stage dive!'”

S] Have you ever been in other bands or have you always done your own solo stuff?

SD] “Well, you know I play drums, so I’ve done a lot of drumming in different bands but I’ve always done my own solo work too. I like just writing my own thing, I’m one of these “I’m going to write it all myself” type of people {laughs}. Not in a horrible egotistical way, but I just prefer to do it on my own and not have to worry if you ever fall out with any of the members.”

S] You have an acoustic album already out, are there any plans for you to record with your band anytime soon?

SD] “I’ve done an acoustic album and my band have done some demos recently. But we’re going to record in a few weeks time to record my EP. Some of the songs will be off the acoustic album but this time with my full band behind it and then we’ve got some new material too. My acoustic album I’ve sold just at gigs but we’ll be making the EP available for download.”

S] In your spare time you’re a guitar and drum tutor, are you pleased to be passing on your knowledge to younger people?

SD] “Yeah, I absolutely love it! It’s just great to teach and be able to show the students your own way and style. I do a lot of quick strumming and teach my students techniques like that, it’s just nice to see them learn and progress.”

S] What gigs have you got coming up this year?

SD] “I hope to do a tour later on in the year with my band, and hopefully playing some venues in; London, Manchester, Leeds and Newcastle. So, it will be a new experience from playing just around the North East area. We’re also hoping to be doing some festivals such as Richmond Live and Stockton Fringe and Intro at Middlesbrough.”