September Mourning are creating a name for themselves State-side. With their confident and brash amalgamation of electronica and metal sounds they have wowed audiences on tour with Marilyn Manson and the band are now ready to record a new album and bring the noise over here. We speak to vocalist Emily Lazar about the band’s future plans… 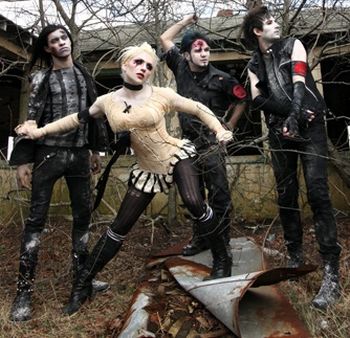 S] What are you looking forward to most about bringing your sound over here to the UK?

E] The new fans, the new faces and seeing their reaction to our sound is gonna be intense I’m sure…

S] You’ve described your live show as an artistic experience before now, can you explain some of your biggest ideas to us?

E] At the moment, everything is on the low because of the nature of the project. Soon. Be patient.

S] When you started out what inspired you to amalgamate metal sounds with electronica?

E] A lot of my influences come from those two genres. I favour both of them so it just seemed like a happy marriage, you know?

S] You are planning on recording over the rest of this year– is there an album title and a concept – what are your other biggest plans?

E] Yes, there are a bunch of things in  the works – this project is a work of art in all sense of the word. I’m putting my lifeblood into it, and enjoying every moment.

S] Emily, you do some modelling alongside your musical work – can you tell us what you enjoy most about both mediums and 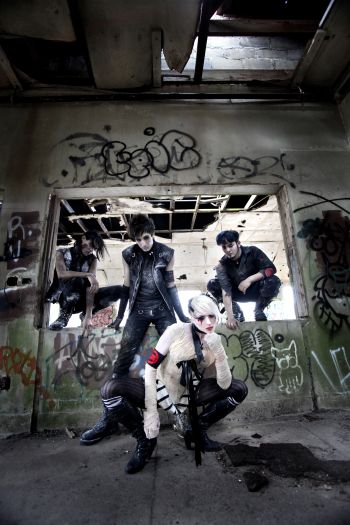 how are they forms of expression for you?

E] When I model, 99 per cent of the time I am doing the styling and the conceptualizing of the shoot. I’m a very visual person. I love to stir people’s emotion through a  visual sense, modeling allows me to do that.

S] Can you tell us what the writing process is like in September Mourning – what is the band’s dynamic like?

E] I write the lyrics and melodies… Chris and James write guitars, keys and programming, we write really well together because we are good friends. We can be emotionally naked in front of each other without worrying about anybody being judgemental and that’s really cool. Like they are my brothers. They look out for me.

S] KatieJane Garside once told us that she had to find her voice by screaming from the top of a mountain – how did you find yours?

E] One night I was banging this really hot guy and I let out this scream….[laughs] just kidding – I’d like to think my voice is forever a work in progress. every time I sing I learn new things about it… and I also train myself to use it in different ways. It’s really cool to see where you can push yourself to if you work hard enough.

S] Can you tell us about the inspiration behind your tracks, ‘The Bleed’ – it seems like a bit of an anthem?

E] I’d like to think I’m a voice for the voiceless. That i’m expressing things, that when I look out into a sea of people, are in their hearts that are on their minds, but maybe they have no way of expressing it or no outlet of expression as I do. Being a singer is a gift. You can speak for so many through your songs and lyrics. It really has an enormous power.

S] You manage to do lots of different things including writing and art, do you also work and how do you fit it all in – what inspires you to keep going?

E] My full-time jobs are music, modeling, writing and art. Ever since I was a little girl I have had a sympathetic heart that absorbs people’s emotions. When I was younger it weighed on me – all of that emotion. It created a lot of hurt, anger and pain because of all the things I went through. Then I learned to funnel it into something positive and powerful. I have so much of me inside that needs to get out, that’s why I continue… why I purge myself, I guess. I don’t think I will ever get it all out.

S] How much unlike people would like to think, is touring with Marilyn Manson – like, what would surprise most people?

E] He’s an amazing, intelligent and complex man. Everything he has done and is doing is a piece of his personality personified in a visual and musical sense. It’s true and honest. I think artistically and even personality wise we are both put together in similar ways. He is an extremist and so am I. He asked to meet me two shows into tour. I heard that’s rare… that he doesn’t really chill with the openers on tour like he did with me. I’m flattered I suppose. I’m very drawn to him, and I’d like to think it’s mutual. Nothing surprises me at all. I’m a hard one to shock. I remember listening to him in the 90s and all the controversy and thinking, he’s an artist. He has the right to express himself. I am always very supportive of other artistic views even if they directly contradict my own. It’s important to have choices in the way you think, if everyone believed the same thing and did the same thing it would be a very boring world to live in.

S] If you could each sit down to dinner with any one person and share the music of September Mourning (it can be any one), who would you pick and why?

E] I would want to sit with my grandfather, because he passed before this project came into fruition, and his love has sustained my heart for so many years.