For our latest band spotlight we chat to Danny Sanchez and Elizabeth Anne Martin of London experimental duo SEVERIN about their influences and ideas. 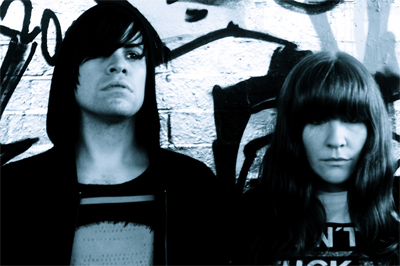 “There are always fanboys perving over Danny’s pedal board”

S] What sort of music did you both listen to growing up and does any of it influence your music today?

D] “I started with Faith No More when I was about 11. From there, I just got into everything; from punk to bossa nova via metal, jazz and 90’s guitar bands, eventually ending up in electronica. The end result is that I’m influenced by everything I’ve been bombarded with and exposed to.”

E] “I started off listening to a lot of 60s stuff; mainly The Who, The Beatles, Kinks plus jazz and rhythm and blues. As a teen, I was obsessed with Indie, then Folk revival, and then riot grrrl. I still love all these music styles, and I guess the common thread is that they all are all basically pop music in its different forms – there’s a big importance placed on lyrics and a good melody. In the last few years I have been in love with experimental electronic bands like Crystal Castles and HEALTH who push things forward in terms of sound and approach. Even so, however experimental we get with SEVERIN I can’t write anything but a pop melody and that must come from all my earlier influences.”

S] The ‘Macabea’ video is very unique, what is the concept behind it?

E] “‘Macabea’ is based on a girl in a book called ‘A Hora Da Estrela’ by Clarice Lispector. It’s also based on the experience of feeling detached from everything around you; like you’re looking at everyone from behind a pane of glass.”

S] In a recent interview for London The Inside, you described how other things, aside from music inspire you such as a book you have been reading, or everyday life. How do you channel these emotions into your music?

E] “I write books and books full of poetry and lyrics based on things that have fired me up or intrigued me. Sometimes I sing these fully formed as melodies, other times we will be jamming and I’ll start singing parts of the song and the pace or energy of the song rather than the literal words evokes the feeling I want to communicate.”

S] You have received some awesome reviews recently, how does it make you feel that people are really relating to your vision?

D] “There are people open minded to new sounds out there, and the fact that they are relating to what we do just vindicates our feeling that we are doing the right thing. I believe that, because everyone is so exposed to different music and other forms of media and expression now, there is a bigger receptiveness and yearning for things you don’t need/don’t have to put in boxes.”

E] “I’m really happy that people are getting something from our music. Good art has to be about capturing the here and now without becoming dated. This is what we are trying to do with SEVERIN. There will always be people that don’t get it and just want to hear a rehash of another indie band, but we’ve been amazed at how many people have just seemed to instantly click with us.”

S] Which bands would you really like to perform with in the future?

S] Can we expect to see you at any of this year’s festivals?

E] “Possibly, although there are plans in the pipeline for tours over the Summer. We’ll have to see how we go.”

S] Do you have and die hard Severin fans that you see at every gig?

E] “There are always fanboys perving over and taking pictures of Danny’s pedal board.”

S] Your song ‘High Shot’ has proven very popular, what inspired it and what is it all about?

E] “High Shot’ is about a residential home in the English Countryside which was set up for young gentleman in the 1920s with ‘indulgence’ problems. Kind of like an Edwardian Priory. I read a book about it and then tried to transfer some of that craziness and attempt at control into a three-minute song. Danny just got it straight away and came out with that amazing stuttering guitar part. The live version is incredible; we improvise a manic extended part which is literally always half a second away from going out of control.”

S] Finally, you are just cracking the music industry, so what can we expect to see from Severin in the coming months in way of tours and new material?

D] “Definitely a single or maybe even another EP by the end of the year. We want to play everywhere we can, so you can expect an UK/Ireland tour at some point and Europe too.”