US metal heavyweights Skinlab have returned after a four year absence. Things have certainly changed on the scene, but the band’s vocalist Steev Esquivel assures us that with the release of their new album ‘The Scars Between Us’, the lab are back and ready to unleash the ultimate aural assault. 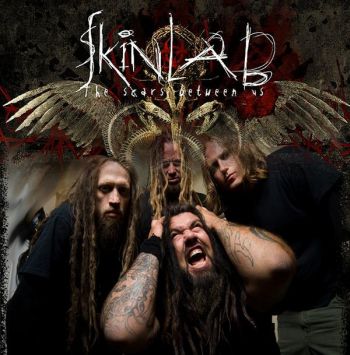 “My philosophy has always been that only the strong survive”

S] Over the course of your career how has your attitude changed toward the metal scene?

Steev] I’ve become more aware of the scene due to changes every year. I try to keep up-to-date and sometimes get frustrated with the lack of quality versus the quantity of music nowadays (laughs) but it’s all good as long as it’s heavy and I’m pretty cool with things evolving.

S] How did your four year absence inspire your latest material – is there a particular moment and song that sticks out for you?

Steev] Of course, but for the most part it’s made us realise what Skinlab is and always will be. Every song on the new album is about life and struggle. We’ve been through a lot in the few years that we were away and we’ve learned to miss what we do and I think it shows and this album is going to open up a lot of ears to us.

S] What do you enjoy most about touring in Europe and when can we expect you back in the UK?

Steev] We love touring Europe and we hope to be back very soon. We are working on everything as we speak. The UK was one of the first places we played after signing with Century Media in 1997. We actually toured our asses off there and we look forward to getting back.

S] How does this new record represent the progression of Skinlab?

Steev] The new album represents Skinlab in 2009 as a more defined more focused band. This album is the heaviest stuff we’ve ever written without compromising our style and following any trends I am personally most proud of this record.

S] How would you like fans to embrace the new music – is there an obvious theme that you would like people to pick-up on?

Steev] Like is said before this album is about life and the struggle, lyrically any one going through the tough times most of us are going through with the economy eating us alive can relate with what I’m saying. It’s hard out there at the moment, my philosophy has always been only the strong will survive and it’s true. It’s true in life and it’s true in the music industry.

S] Talking about different extremes can you take us through the darkest and brightest time for Skinlab over the last couple of years?

Steev] I think the darkest side of things came when we decided to get back together again and set up a US tour that basically failed. A lot of people have turned their backs on us since the hiatus and our last album. The scene had completely changed. It’s been tough seeing some of the bands we played with doing so well now and out there playing the big shows. We’ve always been a band that’s paid our dues the hard way and hopefully this time something will break for us. We’re not giving up until it does. The coolest stuff that has happened for us was literally this past weekend when our boys at Jagermusic threw us on the opening night of the Monster Mayhem festival with Slayer, Killswitch Engage, All That Remains and our boys in God Forbid. Really, it was cool as fuck to catch up with everyone and just to throw-down. We ‘ve been waiting for that shot for a long time and I think we reminded a few people that the Lab can bring it.

S] What are your biggest plans that you can tell us for the rest of this year?

Steev] We plan on trying to land some great tours with some of our buds. We’ll be out there one way or another so, get ready for a beatdown.

S] Can you tell us where you were when you wrote the track ‘In For The Kill’ and what experience inspired it?

Steev] I was in my home studio trying to write the next step for the album. It was at the start of the writing process and it definitely set the pace. After we d demoed it, it was obvious we still have some anger and some really good, heavy riffs in us. Lyrically, this time it’s about the music industry and my love/hate relationship with it. Some things you just can’t walk away from.

S] If you could each sit down with someone and listen to a new track, what would it be and why?

Steev] It would be listening to the new track ‘Papertrails’ which a real story about a kid who goes on a murder spree at a mall. I would like to sit down with this kid and ask him if he’d really thought about what he was doing and about all the people’s lives it would affect.

Check out the video for ‘In For The Kill’ below: