In our next Reverbnation spotlight, we chat to Michael Meinhart of Los Angeles-based progressive rock band Socionic. 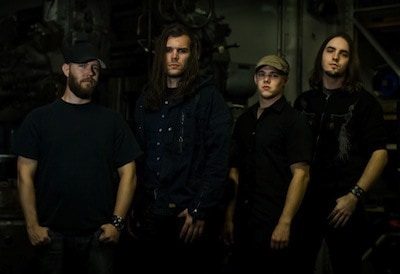 M] “Personally, I was drawn into music with bands like Alice in Chains and Deftones and then later on with Tool, Nine Inch Nails, Porcupine Tree and other dynamic, progressive artists. The power, emotion and artistic approach of those groups, and others like them, have inspired our own pursuit and exploration of intelligently expressive and diverse music. Musically, we’re also influenced by the complex and layered production of various ambient artists and composers, and want to continue to explore integration of those different styles.

In a more abstract sense, I’m greatly inspired by both the challenge and mystery that music provides, as well as its metaphysical qualities which, for me, seem to transcend other mediums logically and emotionally. It provides a pursuit that has no end, but grows in fulfilment and discovery every step of the way.”

M] “The inspiration to create and express has come from the need to address and release emotional forces encountered from experiences in life along with the urge to explore and analyse ourselves and the various scenarios we witness around us. I would say it’s a pretty balanced dichotomy of internal and external exploration.

The exploration of self is infinite, ever-changing and continually evolving in our own perception. The path to individuation and balance within oneself can be long, difficult and confusing.  Personally, I believe creative expression helps that process. The world around us is often unjust, irrational, cruel and unwelcoming. With so many forces at play, all vying for their own power and position and occasionally doing so through methods of corruption and deception, the observation thereof provides an infinite source of material for editorial. I imagine those areas of exploration will continue to be the main sources of inspiration into the future as well.”

M] “There are a few songs in development now that I feel will continue to exemplify the sound and message of what the project represents. One of them in particular, which is yet untitled, explores the lyrical concept of pursuing truth and self discovery amidst opposition of the majority and those close to you, and realising the strength required to stand firm in the convictions of your beliefs. Musically it is dynamic, explosive and ascending, reflecting the tumult and the progress of the journey described by the lyrics.

Of the currently released songs, I might say that ‘Epiphany’ best describes the feel and approach of the band lyrically and musically. Although, I imagine we will continue to explore more progressive arrangements as we grow musically, that song demonstrates the thematic tone of music and lyrics around which we tend to revolve.”

M] “As a reflection of the path and ideal that we try to follow, we want to encourage people to consistently and objectively seek to broaden perspective to allow for growth and understanding in all facets of life. For us, and many others, art and music are the best avenue for such exploration and communication, so we want to encourage people to create and express, and to find others who share the same appreciation to strengthen and grow artistic communities of like mind.

It’s also been a big dream of ours to be able to tour the UK and Europe, so we can’t wait until we are able to come over your way to play music and make some new friends.”

M] “A couple of us in the band are pretty big tech-heads, so we’re always exploring new software and technology to use in the project, both sonically and visually. For the current live set we’ve created a dynamic light show that fits cohesively with the music and enhances the experience of the performance to aid in telling the story of each song. It’s a unique aspect that we believe brings people closer within the space from which we broadcast the expression inherent in the music.

Everyone in the band loves to play live and we all relish the opportunity to cut loose and let it out on stage.  For me personally, singing and performing is a huge release that allows me to within the song and escape to another place for that moment in time.  It’s very cathartic, and I think that sincerity comes out in the performance for all of us.”

M] As an independent band, the biggest challenge that we run into is balancing all the aspects of the business side of things while continuing to produce and grow creatively.  It’s amazing what can be done as an independent these days, but it quickly becomes overwhelming to stay on top of all the logistics necessary to get your music out there for people to hear while competing with the growing amount and rate of media production in general.  This project will continue to focus on depth and quality, but sometimes it can be difficult to cut through all the noise without concerted effort.  We are proud of what this project has produced, so we want to want to go out and bring it to people in any way we can, but constantly have to find a place of balance between promotion and creating.

We’re hoping that with this release we can gain some momentum and eventually get more help to allow us to focus on the creative side as well as playing more shows outside of our home in Los Angeles.”

M] “We plan on continuing to promote our new album ‘Identity’, which released last month, and line up some more live shows including perhaps another mini-tour or two. We also have live footage from our last tour currently being edited and a series of videos in production that will highlight the concept art for each individual song on the album, a few of which will be released by the end of the year.

We really want to find ways to branch farther and farther out of LA to play shows, including eventually a tour in the UK, so we hope to find ways to make all that work within the next year or so. With the videos finishing up and more shows being planned, we’re closing in on the first complete cycle of creating, promotion and performance that we feel best fits the project, so we hope to do it all again.  There are some more songs incubating now and with any luck we’ll be able to do it all again soon. How soon will depend on how well everything goes with this current release.”