Stolen Babies is a diverse, weird and powerful mix of progressive music, metal, goth, electronica and, pretty much every genre you can image. There’s no one way to describe this five-piece from California, except that they will impress not fail to make an impression upon you. Having already toured these shores with Dillinger Escape Plan, the band are hoping to return soon. We catch up with the band’s bassist Rani to talk about new material and latest plans. 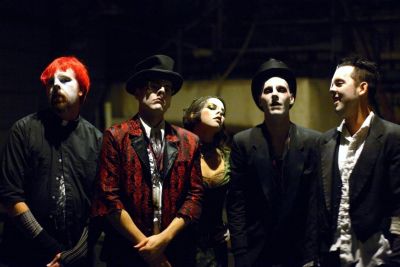 “We’re like Gandalf The White with black polka dots”

S] How has the “creative vision” of Stolen Babies evolved over the time you have been working together?

Rani] Since we’ve started it’s gotten a lot easier to know what works and what doesn’t work for us. In the beginning there was a lot of trial and error…mostly error. We’ve experimented with lots of different things, musically and conceptually, and over time the things that have worked help steer us in the right direction. In other words it’s still evolving. We’re only on our second album.

S] How does the new material you are working on showcase progression from ‘There Be Squabbles Ahead’.

S] Is there a song from the new material that you feel defines the state of Stolen Babies currently?

Rani] So far I’d say ‘Swimming Hole‘. If you had to hear one song by us, that would be the one. It’s got every element in it that makes us what we are.

S] What experiences and surroundings have influenced the writing process this time around?

Rani] Touring has certainly helped. When we did the first album we barely played any shows outside Los Angeles. Getting out and touring the US, Canada and Europe really helped us grow as a band. Europe especially played a big part in influencing some music.

S] What are you most looking forward to about possibly touring the UK again soon?

Rani] Just being there is enough to look forward to. I’ve always had a big affinity for the UK and I’m not just saying that. I think it has something to do with Peter Pan, and National Lampoons European Vacation.

S] Do you have any landmarks that you would like to cover?

Rani] Off the top of my head, I’d really like to see a concert at Royal Albert Hall in London.

S] Your for ‘Push Button’ is a particular talking point for fans- are you working on any other videos?

Rani] That video really set the bar pretty high for us. For a first video we’re really proud of it, but it made following it up pretty hard. We have one video in the works right now that I wish I could say more about. We got the treatment sent to us by a director from Australia and we really liked it. If he can pull it off it’ll be pretty cool.

S] If you could remove a soundtrack to a current film and replace it with your sound, what film would you pick?

Rani] As far as current films are concerned, I’d have to say ‘The Imaginarium Of Doctor Parnassus‘.

S] What has been the biggest challenge for the band over the last few years?

Rani] Remembering each other’s birthdays! You’d think after all this time we’d get it right!

S] Are there any bands that haven’t been lucky enough to tour over here yet, that you think will appeal to our readers?

Rani] Spider Mountain! It’s a group I’m in with horror icon, actor Bill Moseley [‘Devil’s Rejects’ and ‘House of 1000 Corpses‘]. Very cool, weird stuff! Dominique from Stolen Babies did some background vocals on it too. We’d love to get over to the UK. Who knows maybe we’ll do something one day.

S] What are your biggest goals and plans for the rest of this year?

Rani] Being Batman takes up a lot of my time, but here are some tentative plans – finish the album, tour, score some films, tour, score more films.