Every once in a while a band emerges to front the helm of a city’s music scene. For the last few years, Bradford and its richly diverse cultural background has seen the surfacing of a steady crop of musical talent and creativity, and alt-rockers Talk To Angels are set to be such a band. We were delighted to talk to Mickey Dale, keyboardist of Talk to Angels about, amongst other things, their formation, the new album and the Bradford music scene. 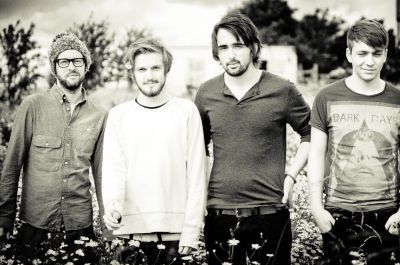 “I do absolutely adore this band”

Formed in 2008 in the early hours of a very successful party, Mickey Dale (yes, the keyboardist of Embrace) who was born and lives in Bradford joined the band after being impressed with Craig Kaye (vocalist and guitarist) and co when they were invited to use his basement recording studio. After the stadium-filling success of Embrace, Dale explains how this was a brand new adventure: “I do have a lot of input into Embrace, especially on the orchestral side, I do most of the string arranging. I’m there to kind of do my thing and the majority of the writing is done by Danny [McNamara, vocalist] and Richard [McNamara, guitar], but in Talk To Angels the majority of the writing is done by Craig and myself.” For the new album (‘This Broken Home’) Dale revelled in the chance to be part of the Talk To Angels creative process from its “barebones right up the production and the mixing and mastering”.

At the beginning of the band’s career, a tour across the US fell into their laps. It would have been the dream scenario for the band, and in many ways it was. A severe car accident however, plagued their tour and marred the experience. The band was not deterred however, and has moved on, recognising it as a very serious but unchangeable moment in their career. The opening track on the album ‘Keller Drive’ for instance features a reading of the police report from the accident and is an example of the band’s ability to use their experience: “The whole album is just really about experiences or our thoughts on things and some of it’s quite abstract…” Dale tells us.

With a prior career in Embrace, many could be mistaken in assuming Talk to Angels would get an easy ride straight to rock and roll success. However, Dale is keen to deter this myth: “If it really was as simple as relying on old contacts and everything, we’d have been hammered on Radio 1, we’d have been all over TV, and the album would be out in major territories!” Talk To Angels are a separate project with the same hardships and struggles as any other unsigned band: “There’s never been a harder time to be trying to do what we’re doing, which is release our album on our own terms, on our own label with the available resources, time, funds and all that kind of thing.” Coping with the interesting aspects of being unsigned, Talk To Angels decided to take a more positive outlook on starting from the ground up: “It got to the point where we just thought, ‘Let’s think less about playing the industry game and let’s just concentrate on playing really great live shows and making the music as good as we possibly can’.”

Working and living in Bradford has always appealed to Mickey and the band, who appreciate the great musical potential the city has to offer, despite aspects of the recession hitting the city rather harshly in recent years. “There are some great bands coming up in Bradford at the moment, it feels like there’s a really great new crop of young bands who are doing things very differently, bands like NGOD for instance.” The legendary 1 In 12 Club in Bradford has hosted most of the talent which is cultivated in the city, and Dale emphasised the need for similar venues in the Bradford district: “The 1 In 12 Club in Bradford is still thriving but they’ve hit financial difficulty because of urgent repair work, but that’s been a really great ‘punky’ independent club in Bradford for about 20 or 30 years. We’re gonna try and see if we can do something with them… just to sort of highlight that there is this great diversity musically in the area.”

‘Hickory Dickory’ the first single to be released from their first collection of songs has been received well and has attracted much acclaim from fans and the critics alike. It was a song which came from humble beginnings around a grand piano and an acoustic guitar, but grew to become an anthemic lead single with as Dale describes, “youthful, naive charm”. The single and album was produced by Dale, Will Jackson (The Cribs, The Pigeon Detectives, The Music) and James Kenosha; an increasing influential East Yorkshire-based producer who has worked with the likes of Pulled Apart By Horses, Dinosaur Pile-Up and Grammatics. “I went with a hard drive full of album tracks and songs that needed mixing,” Dale recalls, “and I knew within half an hour of just sitting in the back of his room reading the paper and letting him get on with it that we’d found the man!” Dale continues on to praise Kenosha for his work on the album saying: “He’s an absolute star, he’s a legend, he’s tireless, he’s inspiring – I can’t say enough nice things about Kenosha really, he’s the guy who helped us get it to the finish line.”

Touring the new album is the next stage for Talk To Angels, but for Dale ideas for an alternative tour of unusual venues are very appealing: “I’ve got my eyes on a launderette in Bradford. It’s a huge, huge launderette and I thought ‘God! Wouldn’t it be brilliant one night when the launderette is shut, to just turn up and put on a gig!'” Leeds would the obvious next city to explore gig-wise, with venues such as The Cockpit being a great outlet for new and established bands. A successful gig around Christmas at the renowned club was organised via social networking sites, a medium through which the band try to self-promote and advertise intimate gigs and promotions for their growing fan-base.

And finally, starting as an up-and-comer once again, what is it that continues to keep Mickey Dale motivated after all this time? “Number one is that I do absolutely adore the band Talk To Angels, the concept of the band and those people in it… that is the main reason. And also just the fact that people out there really do seem to get it, those people who come and see us and get their friends on board with it. I just love doing it, I really love just rocking-up with my keyboard and the band on-stage and putting on a brilliant show.”

For more information visit the official Talk To Angels website.