The Clauberg Opera have been a unique force in East Yorkshire’s alternative music scene since they first arrived from out of Hull’s dank and desolate musical spectrum. They are: J. Mayhem (Jen) and Sinister (Rich) on guitars, Chris (Monster) on bass and then Sid (Sorry) on drums. We caught up with three out of four band members (the missing one being Monster) to discuss the group’s constant inspirations and new ideas. 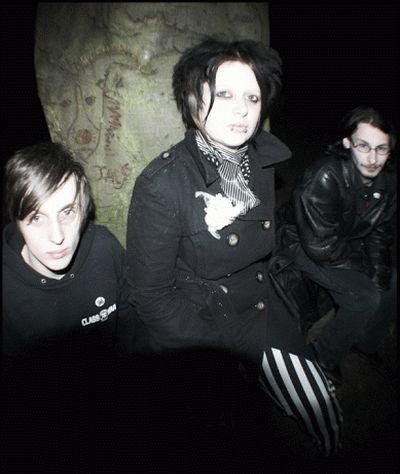 “When we get up on stage, we want to fight and we want a reaction”
S] You have talked in the past about your home town and surroundings inspiring your sound – how does that still ring true in 2009?
Sid] Bransholme has gone a long way to inspiring our sound, not so much Hull. The greatest, most innovative music often comes from a unique place and that is no different in our case. A band like us could not have come from anywhere else. It is a meeting of minds from unique places and unique experiences.

Rich] For me, Hull will always play a massive part in what I do. It’s commonly regarded as a really shit place to live or visit but people know fuck all about it. It’s got character; and it’s a really fucking angry town. I think in what we do and how we do it, you can hear this.

Jen] I think the general mood of the place you live is unavoidable as an influence. Rich summed it up. Hull is an angry town, even more so these days after the local council’s brutally inadequate response to the floods of June 2007. Quite why it births so much creatively redundant pub rock, then, is puzzling; perhaps it’s a form of escapism. Still, even though I think we increasingly exist on our own artistic plane, that anger and frustration is still at the core of what we do.

S] What are the group’s biggest plans for this year?

Jen] Another album, which we’ve just started writing. I can’t give too much away but the ideas behind it are massive.

Rich] I just wanna get out and play a few gigs. We will see how people react to different things.

S] We were intrigued (how could one not be?) by the video for ‘Parliament’ you produced a while back. Are there any plans to expand on the visual side of The Opera this year?

Sid] The video for ‘Parliament’ is class. We are always considering doing something visual but we are waiting for the right moment. Too many bands knock up “crap” videos, for the sake of having one on their CV, and put little creative thought into it. For us, making a video is a big deal.

Jen] Yeah, there are a few ideas floating around. There are films that are as important an inspiration to us as music, especially the Dogme ’95 movement from Denmark, so we definitely want to embrace the visual side of things more. I think our music lends itself to visual representation. You see a lot of bands’ videos and you wonder why they bothered, really. There’s nothing especially important or interesting being expressed; it’s a waste of their time making it and a waste of our time watching it. If you’re going to do it, put some effort it. Make it mean something.

S] You have said previously in 2007 that your label doesn’t talk to you and it works both ways; has your relationship progressed at all and how will they support you this year?

Jen] What we meant by that is that we don’t need to be in constant contact the way some bands are with their labels, essentially being wet-nursed. Our relationship is based on mutual respect; they know what we are and what we do and support us all the way, and we know that they do what they do for the love of music and belief in art. The roster is a gang of bands that are really trying to do something different, interesting and exciting, and Sound Devastation are right at the heart of it, encouraging us all to push the envelope as far as possible.

Sid] Their heart is in the right place.

S] How will any new material represent a progression from your previous work in terms of the inspiration and themes?

Sid] We don’t like the word ‘progress’. There won’t be a better production and we won’t be anymore likeable.

Rich] lt will probably be as violent but with more depth with having the second guitar giving Jen more freedom to do what she does best.

Jen] I’d say that the first album defined what you could probably justifiably call our musical auteur signature; the second album will refine it.

S] What do you guys think of the “pay what you like” scheme championed by the likes of Radiohead, as an independent band, can you see this as the future of the industry?

Sid] Radiohead can afford to take a cut in profits but small bands rely on album sales and merchandise sales to survive. Having said that, we have given away three EPs for free. If you want your music out, then give it away. Too many bands feel the need to have a crass, business-savvy approach to the music industry through fear of getting fucked over by the industry and, also, because they want to make money; they want to live the lifestyle. But it’s not about money, it’s about music and about art.

S] Has your ethos and influence changed at all since you began making music? Do you still  believe in the whole “rock and roll should be violent” idea?

Sid] True art is violence. When we get up on stage, we want to fight. We want reaction.

Jen] We look up to bands like Throbbing Gristle, Killing Joke and Whitehouse, bands that never stopped trying to be innovative, and innovation is just as important onstage as on record. That principle will never leave us. A lot of bands play as though their Mum is in the audience, and the entire local music press in Hull is so uninformed and mumsy that they go along with it. It becomes one big circle of unenlightened mediocrity, and this is happening in towns and cities all over the UK. That’s why you need bands like us who turn up and genuinely kick off; bands that show real emotion and give a real performance. Every band talks up their ‘spontaneity’ in their press release, but few deliver. We are genuinely spontaneous.

S] You are infamous for your live shows, can you tell us about your single best, and worst live experiences?

Rich] Best live experience would be Adelphi, the This Is ‘Ull night. I loved the atmosphere. You kinda had a feeling something would kick off. Add the smoke and the fact we blew the fuses really made that gig stand out. The worst was probably Lamp.

Sid] Yeah, our gig at Lamp was immense. Their naïve, musically inept, murdering soundman cut us off halfway through our set. For us, it proves that we are going down the right path as we are provoking a strong reaction. So, we propose a complete boycott of the place and their ridiculously priced drinks; by Hull’s musicians in response to their murderous antics. BOYCOTT LAMP.