Electro-metal act The Defiled are making quite a wave on an international scale at the moment, having just finished on tour with The Deathstars, the London-based five-piece are about to unleash their new EP ‘1888’ upon us before touring Europe with Static-X. We thought that this would be a great time to grab a few words with the band’s vocalist Stitch D about new plans for the coming months, the importance of Industrial music and of course, we talk about gigging up North. 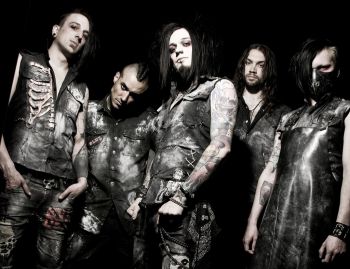 It’s actually been better for us in the North than in the south,” says the vocalist when discussing how the band have been received so far within these parts, “We love playing when we are there, and we actually get a better reception.”

Although London represents a huge part of what The Defiled stand for musically, and while Stitch is aware that there is a big difference in terms of the scene size within their city and individual places up North, he is keen to stress that is no bad thing if you are a new band. He explains, “We love London but there’s always a bigger band on somewhere else and for us it’s good to get out, the people who live further away from the bigger cities know how to party and they also really appreciate the music.”

Indeed if you’re a metal fan, no matter where you are based it’s hard to ignore the explosive nature of a Defiled performance. The group are never satisfied with just waving their hair around in circles for thirty minutes and are constantly trying to evoke and inspire their crowd. The unit has carved out a reputation all over the UK for raucous and energetic shows where nothing and no one is safe. Even the band’s own gear suffers. “The keyboard is usually the first instrument to go.” Stitch explains, “We have been on stage before as a support act having borrowed the headliner’s backline, and I’ve rocked their stack back and forth trying to knock it over while they scream at me from the side of the stage. That was a really good time.”

Despite their fierce and unpredictable live presence the group has some solid ideas behind them and Stitch is very excited about the future of the band and the possibilities that lay ahead. When discussing how the stage show will evolve he says, “At the moment we are a touring constantly and we are often a support band, we don’t really get the opportunity to do anything big but we have some great ideas about what we want to do live in the future.” He adds, “We have the opportunity to do amazing things with lighting and we would really like to have some props too as we have always been into the theatrical side of things.”

In the coming months the band will be filming a video for their song ‘The Resurrectionists’ and although no theme has been finalised yet, the band are looking at it as a chance to make a lasting impression. Stitch says, “We’ve got some really good concepts that we can explore and I think we are going to go mental.” He adds, “We don’t want to be the kind of band that just does the cliché thing filming in a warehouse.”

The track that is the video’s inspiration is also the centre-piece for their debut recording ‘1888’ which will be released in the next few weeks. Stitch explains that the concept for the EP and ‘The Resurrectionists’ is based around their passion for London and its spirit.

“That song basically defines what we are about as a band. It’s about reminding everybody about London back in the day, and we are trying to get that theme across as much as possible.”

The EP was recorded in Europe at Metropolis Studios with former Machine Head and Slipknot producer Rohan Onraet. Stitch describes how the band worked alongside him throughout the recording process to achieve the best result possible.

“It was a joint effort, but for us it was about finding the right sound, it was an amazing experience and he really helped us out.” Stitch continues on to describe why recording was particularly exciting. “It was really amazing being able to record in a studio that was right in between where Iron Maiden and Alicia Keys were.”

The Defiled will not rest until after they are smashing up stages for hours at a time, and the singer assures us that they have already begun working on a debut album that moves away from the themes and ideas explored on ‘1888’.“The album should see the light of day next year depending on fans’ reaction to the EP,” says Stitch.

“I think the next record is going to be more about the state of the world and England currently, although we love living here, we are aware that it’s not the best place right now.” He continues, “We are not some American wank-band who are going to write a love song and pretend that we are young just to appeal to teenagers. We really have got something to say about the state of our country and that certainly comes across within the lyrical content.”

Besides the lyrics the band’s cataclysmic sound crosses between the genres of metalcore and Industrial, and Stitch tells us that fusing electronic music with heavier music was always something that the group had intended to do.

“I think we have always really loved Industrial, it’s definitely a big part of who we are especially from when we were younger, we always listened to a lot of electronic music as well as metal and when the band was formed I made a point of looking for someone with a great knowledge of electronics. We love metal and we love electro so we thought ‘fuck it, why not fuse the two elements together?’

“We really would like to see more Industrial acts out there because a lot of these bands stay underground as much as possible. We are really pushing for it with our sound as that’s one thing England doesn’t have at the minute.”

The band are about to embark on their euro-trek and are looking forward to some headlining dates of their own when they return. “We are going to be touring around Europe with Static-X, and then we will do our own headline dates around the UK following that and just getting out live to as many people as possible, we will be doing lots of dates up North too.”

*Many thanks to the band and to Adam Sagir for setting this up.