The Idol Dead blend balls-out punk music with an addictive glam stomp that conveys their unique passion to drive Yorkshire’s alternative scene forward and gain national acclaim. Having caught our eye at a gig in York recently, we thought that it was essential to grab a few words with the noisy five-piece about their music and inspirations…so we did. 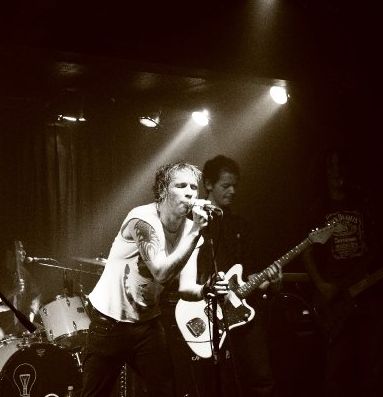 “Glam is everything rock n’ roll should be”

S] In what ways have your hometown and your surroundings in Yorkshire influenced your sound?

Polly] Personally speaking, a great deal. I think when you’re younger, and in a band, you tend to want to be like the cool kids – get a comedy haircut, tight pants and pretend you’re from London. But, I’ve seriously grown to love my roots, I’m from Yorkshire and my dad is Irish, so there’s a lot draw on. As for the rest of the fellas – Miguel, our bass player is half Argentinean and half French, he grew up in Barcelona, so I’m sure that influenced him greatly, mostly in that he’s a lover of loads of different kinds of music. Nish, the man on the drum stool was born and raised in New Zealand, and his parents are Sri Lankan, he has a very tribal style, which he puts down to a Maori influence. KC is half Yorkshire and half Irish like me, so he probably has a deep seated desire in the back of his mind to play raucous drunken sounds in a tiny pub somewhere.

Tim] I’m from Peterborough and had to move to Leeds to escape being in a pub covers band playing ‘Sultans Of Swing’ or ‘Mustang Sally’. I think if nothing else, growing up somewhere as normal as that pushed him to learn to do something extraordinary, so he did.

KC] My father toured through Yorkshire in a band when he was young and I grew up in a house full of music; there’s pictures of me playing guitar age two, and my older brothers played a lot of rock music to me in my childhood, INXS and Pearl Jam, so the seeds were planted young. Barnsley itself had a really small music scene when I was growing up so I joined bands whenever I had the chance, just for an opportunity to make a racket.

Polly] Lyrically coming from a small town has helped a great deal. First because nearly everyone is from a small town so they can relate to what I’m saying and two, you tend to devour information from any place you can – books, magazines and the Internet. So you have a good view of the world to draw on.

S] What are your biggest plans over the rest of this year and into the next?

Polly] Play, record and rock. There’s no game plan here, we do what we do because we love it and it makes us feel good. It’s a cliché I know, but it’s true. Personally, I’d like to record and release under our own steam, make the music we want and enjoy what we’re doing.

KC] Write 4,178 bitchin’ songs for the Dead and headline Leeds festival. Why dream small? Anything positive and progressive between where we are now and that goal will make me happy.

S] How has your attitude changed about the music industry since the group formed?

Polly] Not really, but I have a dim view of the industry anyway, having been there and done that sort of thing. I’m hoping big record companies will become a thing of the past, and we can figure out a way of cutting out the middle man to sell direct to fans. I think that’d kill off the big rock star and focus on people making music to be enjoyed.

KC] Amen to Polly, seeing how the guys were recording and publishing without being signed made me reconsider my work ethic.

Miguel] It’s all about live performance, I’m not into releasing ‘the’ big album and then living with the sales. I’m for free distribution of music and if you get money, it has to be for a public performance, where people really appreciate music in general, and rock in particular. S’all about the show man. 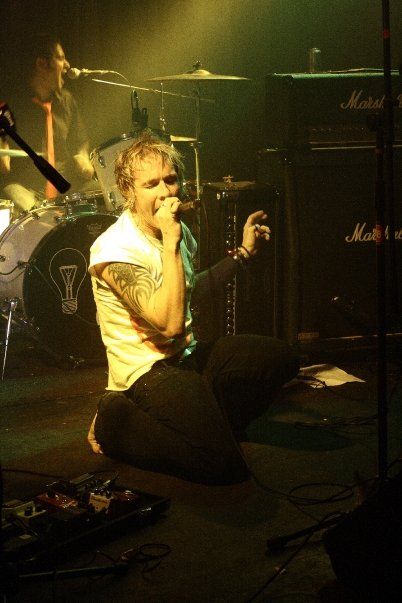 S] Can you talk us through the inspiration behind two particular tracks – ‘Babylon’ and ‘She’s So Spooky’? – what ideas and experiences led up to their creation?

Polly] Pick the sex songs why don’t you! Musically Tim wrote them. So over to him.

Tim] The main riff in ‘Spooky‘ includes the diminished fifth note. Which from my music lessons, I was informed was the work of the devil. ‘Babylon‘ was the sleaziest, lowest riff I could think of. And, funnily enough, Polly took to this one straight away.

Polly] As for the words – they’re both about my current, long-standing relationship in way. Without going into too much detail my missus, who sings on our track ‘Eye Of The Storm‘, blew my mind when I met her. She was different to any woman I’d ever met – exotic, dangerous and cool. ‘Spooky‘ is about my feelings on our first few weeks, the conflicting ideas about a person running through your head, first impression versus the reality, all that good stuff. ‘Babylon‘ is about dirty, sweaty, deviant sex! Whether real or imagined, the thoughts running through your mind while you’re doing ‘the wild thing’, the memories you keep from those special nights and the plans you make before you see someone. The riff also has that groove to it too, if you know what I mean? Lyrical content is inspired by the riff – if it’s sleazy I’ll sing a sleazy song, if it’s angry I’ll have a rant.

S] Will there be a consistent theme running through your debut album and how will it represent a progression from ‘The Shooting Star’ EP?

Polly] Debut album? Blimey, give us a chance! We’ve added a member since we recorded ‘Shooting Star‘, so obviously the dynamic may change slightly – but we don’t think about things enough to create a theme. Unless you mean fat riffs, pounding drums and great melodies? That’s our bag, man. We’re not looking to be original, that’s over-rated, originality can be an excuse for being rubbish … it can also mean you’re brilliant of course.

KC] I’ll be on it! I’m hoping the new material ends up greater than the sum of it’s parts, whilst still carrying that four to the floor power the guys conjured up on the ‘Shooting Star‘ EP.

S] Your music has been described as an “infectious mix of glam and punk music” – what appeals to you about glam as a style and a sound?

Polly] It’s beautiful, it’s what rock n’ roll should be. Grunge almost made music normal, and who wants that. I love the idea of the guy on stage being different to the person in the audience, transcended by the music to a different place, a magic world where anything is possible – you can drink for ever, never have to work and find all the lovin’ you need. I want to believe that while I’m watching someone perform. I don’t think that performers should carry that off stage tho, that’s when you look a bit of a twat. Everyone buys into the fantasy while you’re doing your thing, but off stage you’re just a bloke who can carry a tune. But, to be a peacock for those 35 minutes, and take people to place where everything is possible? That’s what rock n roll should be about.

Tim] Glam and sleaze rock struck a chord with me more than serious indie or ultra heavy music when I was growing up. I listened to bands like Rachel Stamp, Mansun, Backyard Babies, and Dog’s D’amour, which wasn’t exactly that common in Peterborough… The performance and look of a band seemed to matter to these bands more than a lot of the Britpop or man-rock stuff about at the time, and I liked that.

S] What has been your defining moment as a band thus far?

KC] At my first gig with the guys in York, Polly got the crowd chanting ‘I.D.O.L’ back at us, which put a gormless grin on my face!

Miguel] The release of the EP and trying to find a place in the UK rock scene.

S] In the event if a zombie outbreak what weapon would you use to defend yourselves?

Polly] It’s the ‘Shaun Of The Dead‘ route for me – throwing LPs … anything after ‘Purple Rain‘ by Prince, the whole of the 80s output from Bowie and a good, solid 12-bore shot gun.

Nish] A ‘Gears Of War‘ Lancer would do nicely…or maybe the BFG?

KC] An army of the bomber monkeys from the back of Nirvana’s ‘Nevermind’ album. Having said that, I like zombies, so would much prefer to kit them out in Idol Dead shirts and let them wonder round doing publicity for us.

Miguel] That would be nice. I’d pick a shotgun.

S] How did you meet, decide on the musical direction and get to this point?

Polly] Tim mugged me in a back alley and forced me to join his band. Actually, after our respective bands split up (me in Phluid, Tim and Nish in Concrete Bullet), Tim got in touch and asked if I’d be interested in meeting up. We did and found out we like a lot of similar stuff.

Tim] Plus I got him a bit drunk and boosted his ego by saying I liked his dancing.

Polly] Charmer. Tim suggested we could be the ultimate glam-punk-indie-glitter band, with his melodic riffs and my shouty vocals. I agreed. He asked Nish to help out while we found a drummer, but Nish heard a few tasty tunes coming together and decided to take the drum stool for himself. Then we advertised for a bass player, one person answered, luckily he was amazing, so he was in. I played rhythm guitar for a while, but really wanted to just leap about and sing, so we set about looking for that elusive fifth member, after much searching KC popped up, and fit right in both musically and personally. And here we are now, answering your questions and looking at the future with wide, innocent eyes, plus a pocket full of stash, and belly full of Sailor Jerry.