Drawing together musicians based in York and Goa, The India John Movie’s blend of multicultural rock and engaging live performance has already gained popularity in the Eastern country.  Vocalist John Hegarty and bassist Keith Pinto spoke to Soundsphere about how the band came together and how audiences in the UK and India compare. 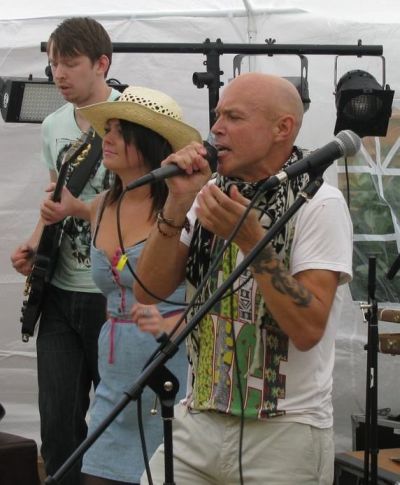 “I wanted to break into the Indian scene, because the story is about India.”

S] Can you tell us about your background and the origins of the band?

J] “I took my daughter to an audition for a musical in York about 11/12 years ago, I think it was ‘Kiss Me Kate’. I got roped into this musical and we both got a part. I had never written a song before that. I was a builder and I used to sing in the car a lot.

After three weeks of rehearsals with singers who could read music, I was driving down the road and words came into my head, so I decided to stop into a lay-by and wrote them down. When I started writing, I thought, ‘This is good’, so I finished the song there and then, and I had the whole thing sewn up in half an hour – the melody, the middle eight.

I had a door unlocked for me in the music society I was in. There must have been a little link somewhere along the line that just needed a connection – I was thinking and hearing music in my head.”

S] How did you meet the rest of the band?

J] “I was still in York at the time, and I was in a position thinking ‘How do I get this song off the ground? What do I do with it now?’ I had a chat with a pianist who was a member of the New Earswick Music Society and he said, ‘Pop down to my house tomorrow, and you can hum it and sing it’. So I did, and within five minutes, he was playing this tune which I had in my head on the piano. That was shocking for me, it was like, ‘How did he do that?’ – it was magic.

I worked with him on and off for a few months, getting over songs off the ground. He composed the music into guitar chords, and I went off into my journey. I met a guitar player, started working with him getting the song off the ground in a loft. I had a pre-album demo, and that’s when I went to India, I’d never done a gig in England before I went to India.

I didn’t specifically go to India to work with musicians, I only intended to look out for ones and see what happened. So I did, and I started jumping up on stage and jamming. I knew I belonged on stage after I did the acting.”

S] Keith, how did you come to meet John?

K] “There were a couple of friends who told me about John. He was looking for someone to start a business partnership, and he was looking out for someone he could trust in Goa. These friends of mine said, ‘Why don’t you meet him as you would get on?’ So, we met up, and it turns out he was also looking for musicians. The first time we met, he gave me the album and I told him, ‘You’ve got something good.'”

S] What were the biggest challenges in India?

J] “When I first got out there, I started working with different musicians all the time; in India, it’s all about jamming. That helped make the album what it is now. In the first two years, I was learning my craft, and that’s when all the ideas fell into place to come back to England and get the album off the ground.

When I went back to India with the album, I was taken very seriously by musicians, and that’s how I managed to get the best of the best there. That’s how I found Keith, the bassist, and Keith Vegas from Bombay, probably one of the best guitar players I’ve come across in my life.”

S] What was the original connection to India?

J] “I went to India as a student, and I travelled all over the years ago. I knew I’d go back one day, and I love it out there. I think it’s a great place. Indian people are great, and there’s a massive rock scene out there that people don’t know about. There’s photos that have just come out; all Indians wearing Beatles outfits. The 60s scene was going on, but it was a fringe thing over there, but it was still happening. They had their own bands like that. It’s still a fringe thing, there’s only about 10% of the population into the rock scene out there, and it’s growing all the time.”

S] What’s the difference between gigging in the UK and in India?

J] “There’s not a greal deal of difference, because a lot of the shows we do in Goa are predominately for European people. We’ll play at a night market where there’ll be up to a thousand people there, and there’d be a mix of Europeans. What I love is when Indian audiences are shaking their heads and moving to the songs I’ve written. They tend to be very enthusiastic, they’ve got no qualms about letting go and dancing, they are quicker off the mark than British audiences.”

K] “Everywhere you go in India is a different place… A place like Goa is more of a tourist place, so you have people who just want to jam. There’s more freedom, musicians allow you to come up and jam. In Bombay, it’s very strict and more professional. I’ve been pushing John in the past three years to get into the UK scene.”

J] “I wanted to break into the Indian scene, because the story is about India. Eventually, Keith convinced me we’ve got to be over here for the album.”

K] “For the album, we’ve got to be in the UK. From here, the next step will be the States.”

J] “The biggest stumbling block is getting the album into the hands of the right people who are going to listen to it properly a number of times. It doesn’t matter what reviews you get. I know there are at least a minimum of two tracks that could go mainstream. That’s the general consensus of people who I’ve met.

More often than not, people have gone, “That track, that’s the one, that’s really good,” and weeks later, they’ve [changed their mind]. I’m pleased with this album; it’s not a two-song album, it’s all a bit different. Each song’s been written over a period of time.” 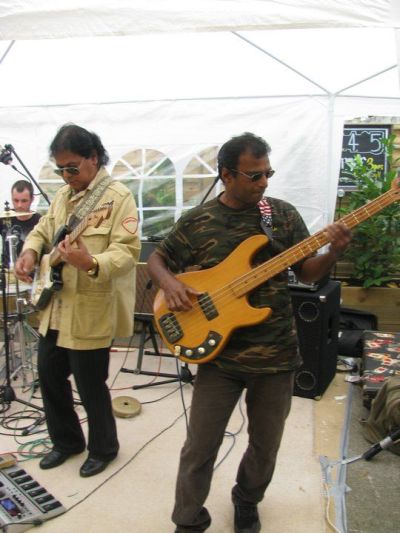 S] What are your songwriting processes and inspirations?

J] “We are writing stuff together, Keith is giving me ideas. The next songs that are written will be more of a combined thing. I hear a lot of riffs and leads in my head. I can’t play the guitar, but I feel I’m a guitar player in my head, which I put across to a player who wouldn’t have though of that riff.”

S] Can you pick out one song which defines that sums up your current sound?

J] “‘Last Hippie Standing’ is the song that tells you the story of a journey in India in the late 1960s on a bus called the ‘Magic Bus’, that went from London to Bombay – not long after the Beatles went. Word then got about, and it became a hippy vibe place in the late 60s.

The music, it’s rock, but also possibly folky, a Britpop kind of vibe. It defines where we are at in one way, but we’ve got punkier songs on the album.”

K] “Now, we are working on a psychedelic song. We’re experimenting with a lot of stuff.”

J] “I’d say we are going in two directions – our version of psychedelia, and throw a bit of punk into it. I’m just a growing lad, I don’t know where I am.”

S] When can you expect new material?

J] “Until we get this album off the ground more than it has been – as it’s relatively unreleased and it’s been out for three years – we’re not going to record another album. I wouldn’t mind recording, though; we’ve got easily enough for another album.”

S] How will the new album compare?

J] “You won’t be able to compare it to the current album – it will be very different. I’d say I’ve moved on now as a songwriter, a singer and a frontman. I consider I’ve done my apprenticeship. Whether the album will be better, that’s for the public to decide.”

S] What advice would you give to new bands out there trying to make it?

J] “Musically, you’ve just got to work hard to be as competent as you can, that goes without saying. There has to be one person in the band who has that natural ability and songwriting talent if you’re going to move forward. If you’re trying too hard, it’s not going to happen. It’s not about greed or fame, it’s about wanting to get your material liked.”

K] “There are a lot of good guitar and bass players. Most of the guys I’ve heard either sound like Satriani or Steve Vai, they don’t have their own identity; they shouldn’t go too heavy into copying somebody, they have be themselves.”

S] Can you tell us about any defining moments which have shaped the band?

J] “There’s got to be a few… it’s got to be anytime I’ve walked out on stage. Whether it’s a big stage or a small stage, the absolute buzz is there. Our second ever gig was nice, it was in the sunshine, there was a lot of people there and the sound was good. In India, going on the big stage is great. At a venue, there’s a stage made out of raised-up concrete with lights and everything, where you can really run about. That’s what I enjoy.”

S] If you could come up with a melting pot of influences for The India John Movie, what would be its ingredients?

J] “If you listen to the album, there’s a little something for everyone tucked in there. A bit of metal, you’ve got The Beatles, Oasis…”

K] “Something for the older folk as well.”

J] “There’s some melodious Sunday afternoon music that’s still got a bit of an attitude. It’s not been planned that way, it’s just turned out like that. Just have a listen to the album a few times.”

You can find out more about The India John Movie on their website.