In our latest band spotlight, we chat to The Moons’ Andy Crofts about the music and inspirations surrounding the band’s forthcoming record, ‘Mindwaves’. 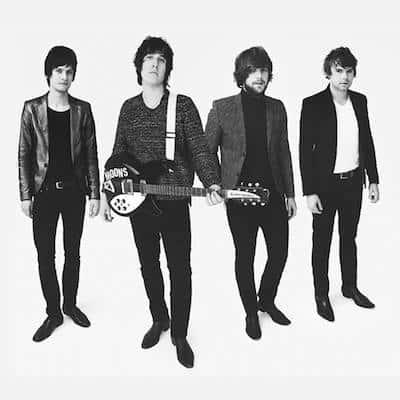 S] What events or ideas inspired the single, Heart And Soul?

A] “I have never been afraid of writing love songs, infact they come pretty easy to me but I also have a side of me that tends write about the girl always breaks my heart. This song is about a girl who has the looks and the power to pull you in and pull at your heart strings like a puppet. When’s she’s finished she spits you out. I’m sure we’ve all been there in some way or another. At the time of writing this song I was in a big glam phase as you can hear in the track. I picked up the guitar and played the opening chords and riff instantly. After that the rest just came naturally. I didn’t originally want it on the album but it seemed to fit well do it found its home on there.”

S] How are you looking forward to the UK dates and playing smaller cities like York and Hull?

A] “Yes, we are looking forward to playing these shows. These smaller cities are usually a little different as they may not have a strong gig circuit. Hopefully we can coax a few people off their couch on a week night to come see us live. This is a small run of dates for now and we have a much bigger tour to come after the album release.”

S] How do you look back on the success of ‘Life On Earth’ at this point in your career?

A] “I never look at it as success because in the modern music world they are not really a success but a collection of excellent music. Being “successful” these days involves hanging around the mainstream and changing your haircut to fit in, let’s not forget the awful music to go with it. This is something I just can’t do with my music. What I would say though, is that looking back on our last two albums is quite an achievement to me. I think of The Moons albums as my diaries and looking back is interesting to see how I was at the time. I can’t remember writing half of it to be honest. When I say diary, I don’t just mean words or lyrics, I mean actual music. I like to listen back to types of songs or chord changes I did in the past and how it has changed. My idea of success for the moons would be to love and understand our music and me to continue writing music.”

S] Where do you draw the greatest inspiration from – people or places, and why?

A] “Inspiration can come from many things. I get inspired by the weather a lot and it can really effect my mood and songwriting. I find myself in a good musical mind when it’s raining outside. I create a lot when it rains. I get inspired by books, and headlines in newspapers and magazines. People who inspire me are varied but musically it would be Brian Wilson, Bowie, Lennon,  Mccartney & Harrison, Tame impala, The La’s, Talking Heads, The Bees, The Shirelles. I love the French band AIR, I still hold ‘Moon Safari’ as one of the best albums I’ve ever heard. The amazing production of Joe meek, Motown and Phil Spector also blow my mind as well as the complications of classical music. For the sake of this interview I have kept it short but I could go on and on.”

S] Even at your level of success, what would you say the biggest challenges are for The Moons?

A] “The biggest challenges are just keeping on top of it all. I’ve spent most if my life realising that if you don’t do it, no-one will do it for you so I have to keep very active with the band. Obviously whilst doing this I am constantly trying to write new music and always plan for our next album. Getting the band together is probably the hardest challenge as we all live up and down the country.”

S] How would you say you guys have changed and developed as a band since you started out?

A] “When The Moons were formed it kind of just happened piece by piece. I started the band as a little solo thing and didn’t really have plans for a band. I went under the name The Moons to purely put my music under but as time went a long I started to work with musicians here and there and the band just came together and since then we have had many musicians come and go. I think the band have come on a long way musically since the start. As I said earlier it’s interesting to see how we progressed musically. Our new music is so much wider and colourful but I think but overall there has been nothing but the highest standard of songwriting from the first album until now.”

S] What are your greatest inspirations outside of music?

A] “Well, interesting question, because I have a big obsession with horror films and spend most of my free time watching them. In my music you can always here the odd dark chords that refer to this influence. I find my mind is like chalk and cheese as in one minute can write darker music and then the next I want to write about love. As a child I was obsessed with space, the stars and planets. All this has contributed to my writing in some way or another.”

S] Can you talk us through the main inspirations and ideas behind ‘Mindwaves’ and what you’re most looking forward to about its release?

A] “‘Mindwaves’ started as a collection of songs that I was considering putting on a solo album as a side project from The Moons, but I soon decided that it was totally Moons material and that’s where it should stay. The album takes influences from many aspects of my mind. The frustration of the corporate and manufactured world that we are trained to obey, the love and seclusion of people and the drive that keeps us pushing through all of this. My musical influences are wide on here and stem from glam, classical, 70s synth sounds and a modern indie horror soundtrack. I think the album is great and our fans will not be disappointed.”