What do you get when you cross eleven music students from the North with a penchant for brass and bouncing, a fondness for crustaceans, and a dash of general lairyness? Well, quite simply you get a damn good time. Allow us to introduce to you The Prawnskas. 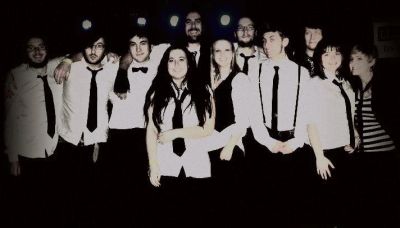 “You can’t listen to good ska music and not dance”

Currently filling (and frankly overspilling from) stages across York and Manchester The Prawnskas are starting to turn some heads whilst they spread their infectious wave of skanking, like the most joyous venereal disease you’ve ever contracted, throughout the North. We have five of the eleven ska monkeys to chat to today and, naturally we begin with the obvious: So why that name? “Well, we were going to be called The Pornskas,” explains Rich who put the band together in the first instance, “but we decided we were probably better off with Prawn.” With the enigma of the prefix resolved we turn our attention to the more significant component of the name and query: What is it that appeals to you most about ska? “It’s the ultimate party music!” Comes the emphatic response. “You can’t listen to good ska music and not dance.”

Ska has often been maligned as some kind of lesser sibling of genres such as punk or reggae but The Prawnskas are determined to do their bit to redress this unfair preconception. “Most of us are multi-instrumentalists,” states keys-lady Chad. “We play ska because we love it not because we can’t play anything else.” When asked why they think ska is sometimes not offered the respect it deserves vocalist Ben is quick to reply: “I think it’s because ska bands don’t take themselves too seriously.” He has a point and it’s refreshing to be in the company of a collective of such talented musicians who are entirely without ego regarding their musicianship. “To be honest…” the local brass purveyors continue, “we’re quite happy that ska hasn’t really broken the mainstream in recent years because it keeps it unique.”

When asked if it can ever be a problem to have so many gifted people in one band and indeed occupying the one stage The Prawnskas further reveal their professionalism and hardworking ethic. “Well, we don’t really get problems from a musical standpoint because we all love the music and we make sure that we rehearse all the time. We’re close friends and that comes first. If it ever became a chore it might be time to stop but it’s still a great laugh at the moment.” When one member of the band, who shall remain nameless to save embarrassment, adds earnestly “We’re more like a band than a family” you can tell that, despite the cheesiness of the sentiment, there is no reason to doubt them.

So what music is it that provides the most frequent inspiration for The Prawnskas? Drummer Jack, lovingly referred to by Chad as the “oldie of the band”, is something of a walking ska encyclopaedia and he reels off a huge list of ska influences singling out The Mighty Mighty Bosstones for special commendation. But, for Jack and the rest of the band, ska is only one colour in a kaleidoscopic musical horizon. For guitarist Jonny it’s punk as he grins, “Everyone loves power chords don’t they?” Whilst Jack name checks Rush and prog rock as a massive influence on his musical style, and Rich enthuses about his love of “Big bands, I think it’s the horn player in me.”

With such a diverse range of influences it is inadequate and unfair to try to cram The Prawnskas into such a tight pigeonhole as ska but they are more than happy to be contributing to a dialogue with the heritage of a genre they clearly adore. “Wind-band-punk  is probably more accurate a description of our style” Rich says, and at this point what The Prawnskas want more than anything else is to broaden their horizons and start playing gigs further afield. They do however wax lyrical about York and, in particular, Stereo on Gillygate which they refer to as something of a spiritual home. “We need to do a shout out to Andy at Stereo and give him a big thank you for everything,” they state rather doe-eyed regarding what is clearly a special venue for the young band.

Before we say a tearful farewell to our new skank-tastic friends there’s just enough time for Chad to reveal a glimpse of the darker side of the band behind the bounciness. “Some of us are sexual predators. There are couples in the band and we can be quite sexually-orientated.” When we ask if this is ever a problem, we get another grin before a typically jocular response: “Nah, not really. There’s so many of us in the band we can split couples up and make them stand at opposite ends of the stage.” On that subject the other half of the twin lead-vocal team Andy confirms that, “We’re always happy to add more members to the band.” So if you have some serious cowbell skills get in touch for an audition.