Recently, SPHERE caught up with RevCo vocalist Joshua Bradford mid-tour for a very quick chat about how it’s going on tour over in the States with the current incarnation of Al Jourgensen’s legendary project… 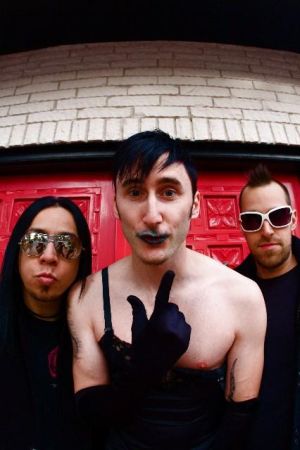 “UK fans can expect to see my penis” – Joshua Bradford

S] How’s the tour in the States going right now – there’s some established and new Industrial bands acts – do you feel like you guys are flying the flag for Industrial at the minute?

Josh] The tour is going so well, I think I need another drink. We are flying a flag, but I think it should say ‘queer nation’.

S] Has there been a typically debauched moment that stands out?

Josh] It’s all a blur my friend. I do remember getting drugged by this drag queen one night…. I woke up very sore.

S] What’s the best thing about being a Revolting Cock on the road?

Josh] Getting drugged but not waking up sore and the catering.

S] Have you guys given thought to documenting the RevCo live show at all in the future with a DVD or blog?

Josh] We would love to, if one member of our crew could stay sober enough to do it, it would be great.

S] If you guys could sit down with anybody (dead or alive) and listen  to the latest record ‘Sex-O-Olympic-O’ over some dinner, who would it be and why?

Josh] Hitler, because he seemed like a pretty laid back guy. Or Warwick Davis.

S] For UK fans that haven’t seen you, can you describe the stage show for the ‘LubriCaTour’ and what they can expect if you come over?

Josh] They can expect to see my penis.

S] What are the group’s biggest plans following the completion of this tour of the States in October – will you go back to your individual projects?

Josh] I have albums coming out with my projects Stayte and Simple Shelter, with tours as well…. Sin and I might finally release our project The Latina Turners as well. Here is a question for you…What are you wearing right now?