A dose of sunshine-saturated pop-punk is just what we need as winter approaches, and who better to get it from than Arizona rockers The Summer Set, who toured the UK with the hugely popular Mayday Parade this month. With their latest album ‘Everything’s Fine’ being a hit with the Brits, the band are planning to unleash new material on us sooner rather than later. Lead vocalist and songwriting perfectionist Brian Dales tells Soundsphere about the sass of their upcoming record, starting fresh as a new band, Gangnam Style, and Mickey Mouse. 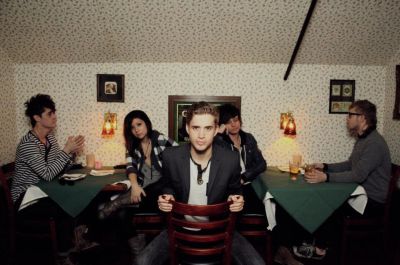 “I just can’t get behind ‘Gangnam Style'”

“I’m expecting crowd-surfing,” is Brian’s first prediction before their show at The Kingston Peel (which they played last week). “Well, I might do it,” he clarifies, as it’s realised just how small and snug the venue is (especially compared to London’s Electric Ballroom, which they commanded the night before). “I’m excited for tonight – it’s going to be a lot more personal, more punk-rock. It’s going to get real intimate.”

Having toured with The Cab, All Time Low, Yellowcard, Cartel and more, the Scottsdale five-piece have plenty of tour stories to tell, and plenty of craziness to share. “Warped Tour in Long Island, New York was probably the craziest show we’ve ever played, people were fighting while we were playing and we’re not really a heavy band at all. There was like a wall of death that happened. Crazy.” With fans waiting outside The Peel hours before doors open in dismal October weather, maybe it’s their supporters that are crazy? “Well, I’m always impressed, not in like a weird way, with people who will go to every show, go to five in a row – that’s commitment,” Brian says. “That’s a good crazy, that’s my favourite kind of crazy.”

Much like their music, it’s no secret that these pop-rockers like to have fun – sometimes a little too much. The Summer Set’s newest setlist addition ‘Fu** You Over’ lets the world know on Brian’s behalf that well, fun is just fun, don’t take yourself too seriously. “I think ‘Fu** You Over’ is my almost sarcastic apology to a long list of people who maybe thought me having fun was something more serious than that,” he laughs. “I think a lot of the new record is very fun, much like that song. ‘Everything’s Fine’ was a very sentimental, very nostalgic record and made me want to turn around, switch gears, make something more energetic. There’s a lot of that kind of sarcastic cattiness going on, it’s my not so apologetic apology to certain people in my life.”

What Brian’s also not so apologetic for is his take on always creating something brand new, no revisits here. “I don’t really understand when bands make every record sound the same, if I wanted to hear your new record which sounds like your first record, I would just go listen to your first record. I have this mentality where we go into every record as if it’s the first record we’ve every made, like we’re a new band – I think a lot of great bands do that and I’ve always aspired to do it. For this record I think that’s kind of the idea, the next one could be totally different.”

“Different” may mean more acoustic songs, which has been popular with their audience, a prime example being their backstage session of ‘When We Were Young’ in Manchester earlier this year. “We recorded an acoustic version of ‘Young’ (off debut album ‘Love Like This’) that I genuinely think is better than the album version. I think sometimes you write a song, and you record it one way, then you get the chance to record it a completely different way, then you realise, ‘oh maybe that’s the way it was meant to sound.'”

So how do The Summer Set songs sound when sung in the shower, we wonder. Do you sing your own stuff in there? we ask, to which Brian says unashamed: “new ones that I’ve just written, yes.” Blatantly proud of the fact, he admits next that he has no “guilty pop pleasures” either as the guilt is nonexistent. With chart-toppers in question, he comments on recent Korean viral hit ‘Gangnam Style’: “I can’t get behind it, I’m obsessed to my core with pop music but I don’t know why I can’t get into that, I think my problem is that I don’t have any idea what he’s saying.”

Instead of PSY, Brian recommends Jillette Johnson’s EP ‘Whiskey & Frosting’ (“a mix between Regina Spektor and Fiona Apple”), along with Milo Greene’s self-titled debut album, for new music to listen to this winter. As for a timeline of The Summer Set’s new material, the band plan to surprise fans with a release of ‘Fu** You Over’ possibly within a month, and another single at the beginning of the year, plus a full album in spring all set to take on a summer tour. Not to worry, we’re on the list: “I’m trying to get on this twice a year schedule to come to the UK, I really like it here. The shows are really good, and this being our third time here I love that I can see that momentum of a growing fanbase, I want to keep capitalising on that.”

Anything else interesting Brian wants to leave readers with? “Guess how many articles of clothing I own that have Mickey Mouse on them.” How many? “Thirteen.” Really? “Actually, that’s a lie, fourteen.”