“A band that matches the sullen boredom and nihilistic pent-up anger of battered, small-town Britain with a fistful of big anthems.” That’s how The Suzukis, who hail from Wigan, proclaim themselves; a grounded promise which has struck a chord with fans and critics alike.

We caught up with the band’s bassist Waz [or Robert Warnes to his family] to discuss the advantages of festival performances and the disadvantages of not being a Southern band. 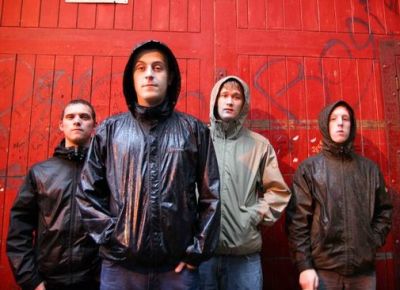 “If the next album does well, expect to see videos full of elephants and diamonds”

S] It’s been a busy summer for The Suzukis – can you tell us what you’ve been doing?

W] “Yeah, we’ve been well busy over the summer. Our first album [‘The Suzukis’] came out, so we’ve been doing a load of gigs around the country for that. We’ve done a couple of the festivals too.”

S] What have been your highlights of the summer months?

W] “The main highlight was probably the Sonisphere Festival. We were on the Red Bull tent at half 11 in the morning, so we weren’t expecting much from it, but when we played, there was a few hundred people in there, and it went really well. Also, we gave our backstage passes to this young family as we were leaving, and they got in touch with us to say it was the best weekend of their lives! That felt ace.”

S] The recent riots in English cities have been mainly pinned on the “disaffected youth” you reach to in your music. How do you feel about using music to articulate opinion on such issues?

W] “The people rioting weren’t the kind of people who would listen to our music. If you have something to say, music is a great way to do it, but these people didn’t have anything to say, they were really just having a mad laugh and robbing everyone blind. No political motivation.”

S] Do you know how people affected by social issue respond to your music? If so, how do you feel about it?

W] “Everyone’s affected by social issues. Most of them don’t listen to our music.”

S] As well as in your sound, your videos often depict gritty urban scenery and iconography. Where does the idea for exploring these themes come from?

W] “Really, the videos are down to our mate Dom Foster. He’s a fantastic artist; he does all our visual stuff – in fact now, I think he does pretty much all of Deltasonic’s stuff. It all looks ‘gritty and urban’ because it’s filmed around our local area, due to the fact that we don’t really have the budget to go elsewhere. If the next album does well, expect to see videos full of elephants and diamonds filmed in LA or summat.”

S] Do you get any flak about your image?

W] “Most of the flak we get comes from our biog. John Robb wrote this proper romantic poem about what working class b******s we are and reviewers seem to take it as if we wrote it.”

S] Does your hometown of Wigan influence your musical approach in any way?

W] “I reckon if you’re writing music, wherever you are will probably have an influence on it.”

S] What’s your perspective on how Northern musicians are perceived in the media?

W] “I don’t get it. If you’re Northern, whatever’s written or said always seems to start with ‘Northern band…’, but I don’t think I’ve ever seen any article or review of a band that starts ‘Southern band…’. As if it’s unbelievable a group of people from the North can drag their knuckles off the ground for long enough to grab hold of an instrument.”

S] You’re signed to the same label as The Coral and The Rascals. Was this an influencing factor in deciding to sign for Deltasonic?

W] “No. Nobody else would come near us.”

S] We understand you’re performing at the Underground Festival (a free music event) this month. Why did you decide to get involved in the event?

W] “You have to look for the good festivals. It’s such a big thing now that there’s gonna be a lot of s**t at them. The smaller ones tend to be better, with more rock bands.”

S] Apart from Underground, what else have you got lined up for the future?

For more information about The Suzukis, visit their website.