With a remarkable ability to fuse musical styles using just his versatile vocal abilities, beatbox artist THePETEBOX has taken his talents worldwide to critical acclaim, including awards from Channel 4 and BBC Radio 1. We speak to the man himself to find out what makes THePETEBOX live experience and which iconic band gave their personal endorsement to his cover of one of their tracks. 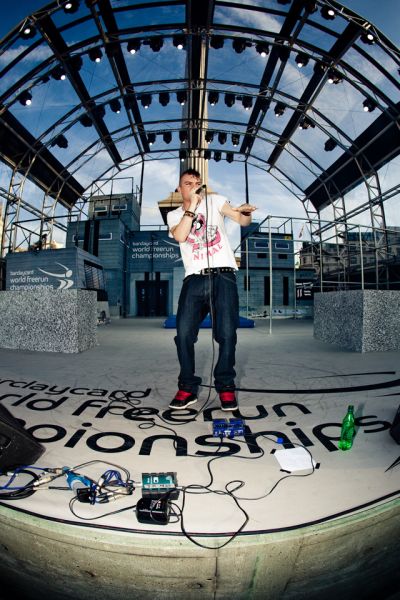 “Music is music. And it’s awesome.”

S] Can you tell us where the path to your career started?

TP] “I picked up a guitar years ago. Then I started beatboxing a few years after that.”

S] Who were the key inspiring figures when developing your act?

S] We checked out your set at the recent Galtres festival near York and it was mind-blowingly awesome. How did it go for you from your perspective?

TP] “That was a good’un – the end of a crazy weekend of shows, Leeds and Reading Fests, a show in Newport with Professor Green, the MyChoone festival… but I think the lack of sleep spurs you on, so by the time I got there, I was ready for the last crazy push, and it rocked for me.”

S] Where does the Galtres experience fit in with other festivals you’ve recently performed at?

TP] “Festivals are always different… Galtres was ace in its own way. Ace crowd and ace setup.”

S] It’s fair to say you’ve got a knack for getting a crowd hyped. How do you deal with the reaction you get?

S] Do you get different kinds of buzz from performing in various situations? How do they compare with each other?

TP] “All buzzes are good. Get as many of them as you can from wherever you can.”

S] In your shows, you get the crowd to interact with you as you perform. How important is it for you to involve the audience?

TP] “I feel we’re all in the experience together. We bounce off each other. I wouldn’t want them to ignore me so I would never ignore the crowd.”

S] You’re also very keen to share how you create your sound with the audience, breaking the process down step by step. Why do you do this?

TP] “I can never think of cool stuff to say between songs, so I just explain what I’m doing. Plus, if people don’t know it’s all live, they’d think they were at some strange, wonky karaoke session.”

S] One thing we particularly liked about your set was the wide canon of songs you incorporated; from Dizzee Rascal to Pixies, from Reel II Real to MGMT. How much does this reflect your personal taste in music?

TP] “I hear music in a very much un segregated way – a nice melody is just that, a heavy bassline resonates wherever it comes from, a chord progression that moves you can’t be ignored, even if your general taste doesn’t ‘cater’ for the kind of music you are hearing it from. Music is music. And it’s awesome.”

S] Are you aware of what these artists think of your set? How does it compare to the reaction you get from your audiences?

TP] “Pixies put my version of their song ‘Where Is My Mind’ on their website. I now don’t care if anyone else ever likes or even hears anything else I ever do.”

S] Are there any artists you would like to collaborate with? Why would you want to work with them?

TP] “I don’t really think in ‘collaboration’ terms. I play in a band called Swimming and love playing music with other people, but there’s no real ‘hit list’ of potential collaborators for me… but watch out for my ‘Collaborations Series’ coming out next year.”

S] You’ve won a few prestigious awards from the likes of BBC Radio 1 and Channel 4. What does winning awards represent for you?

TP] “Awards are cool, but nothing I’d ever work towards or measure how content I am with where I’m at by.”

S] And your fame is also now spreading across the world. Can you tell us where the THePETEBOX experience has taken you so far?

S] Are there any countries you’ve not travelled to yet which you’d like to conquer?

TP] “I don’t want to conquer anywhere. But I’d like to play my music everywhere.”

S] What’s up and coming for ThePETEBOX in the future? We believe you are working on some exciting projects, including some solo studio sessions.

S] Our last question; you’re bringing out a four-track EP of cover versions. You’ve got free rein over which artists and songs you can record, but you can only pick one track per artist. Which four songs, which four artists and why?

TP] “If I answered this question honestly, I’d be giving away some tightly held secrets about my album. So I guess hold tight for the album and all will be revealed there! I have some exciting and cool stuff about to be unveiled.”