TRAUMa Inc. are an exciting and dangerous mix of Industrial influences – the music from the Glasgow based three-piece is set to tear your ears off. We speak with the band about their influences and the development of their sound. 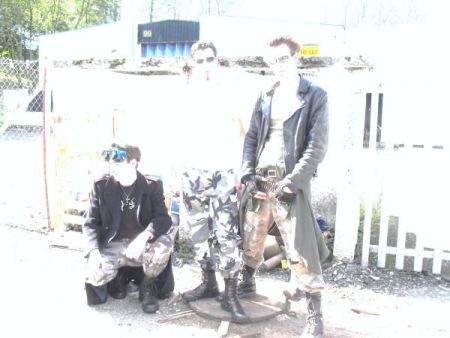 S] What personal experiences inspired your track, ‘Define Yourself’?

JR] Basically the song ‘Define Yourself’ was born out of many of inner emotions It is definitely the most personal track I myself have ever written. I don’t want to be clichéd, but  I am from a broken home and on top of that I’m adopted so therefore I’ve experienced many things that others haven’t. In turn people have felt the need to put me down and make up their own ideas of who I am without ever talking to me.

The key lyrics to said song being ‘What is it that you want? What is it that you need and why is it that you care’ highlights my questioning of people who approach me I always get too defensive and jump to conclusions. The next lyric being ‘You don’t know me you don’t f***ing know’ which is in response to the mental grievances I’ve been subjected to throughout my life so far. The song explores my self doubt and also my ability to ignore what others think and highlight my personal feelings and justify who I am and not how others perceive me.

S] In what ways do your surroundings and Glasgow in general inspire the sound of TRAUMa INC?

TI] Glasgow as a working class city has inspired us in a variety of ways, although it should be noted that Brad is the only member not from Glasgow (he is from South Africa so the same issues arise in his background albeit a little bit more extreme in its prejudices). Glasgow is a city of sharp contrast, between the rich and the more disaffected amongst its population. Knife crime, violence and social discontent are issues which arise in some of our tracks, but in particular ‘Severed‘ – our track about knife crime in Scotland.

S] What are your biggest plans this year in terms of spreading your music around the UK?

TI] We are hoping to play more gigs across Scotland, possibly branching out to play gigs in Inverness, Dundee and Aberdeen instead of just playing gigs in Glasgow and Edinburgh. Also within the next year we hope to play our first gig south of the border and get our album released, and available for online shipping.

S] ‘If you are a new band putting yourself in a niche like “Industrial” will inhibit your progress’ – how do you agree and disagree with this statement?

TI] Industrial music has come along way since the early days of English bands like Throbbing Gristle and Coil. Industrial music to us as a band is a broad spectrum, ranging from the old-school of Industrial records to its offsprings; aggro-tech, future-pop and others. We as a band are trying to utilise the old-school industrial sound and update it for a modern generation, creating an original sound with a variety of genres for inspiration along the way,

S] For those people in England who perhaps have not heard or seen you before, can you describe to us what we can expect from a TRAUMa Inc. show?

TI] Three words…Industrial-mental-Anarchy. We pride ourselves on putting on an energetic live performance, with JAy and FR spending very little time on the actual stage, getting into the crowd and creating an energetic and intense atmosphere, as a recent gig review from Monthly Metal said: “TRAUMa Inc. were well on form with Brian getting a good level for their beat and groove, trancy in places backing track. The heavy guitars by JAy R shredded out giving this two-man band  a vicious streak a mile wide…frontman, FRequecy baring his angered and tortured soul had a hypnotic effect on the small but bewitched audience….”

That was written before PSyron came back to the fold. Now we’re a three-piece, with new shows and PSyron directs his electronic aural assault from behind his wall of synthesisers, and other electronic equipment. We are currently trying to edit a fifteen minute live video shot at our last Glasgow based gig. Once it is all done and dusted we will be uploading it so people can see for themselves what is to be expected.

S] What song in your catalogue represents the state of Trauma Inc. now in 2009?

TI] We really have to state two songs here: I think that lyrically we have, ‘Statement of Intent’ and the core lyrics…‘We’re back once more in to the breech, transgression is our Omaha beach, our D-Day landing and Market G – our own aesthetic of transparency…’ and musically our track, ‘Relapse’.

S] Can you explain if there’s a consistent theme within your forthcoming debut, ‘Aesthetic Of Transgression’ and how that moves on from previous work?

JR] The title suggests moving on and transforming. It represents the want to change and to not make any two things the same. The album has turned into a far more personal album musically and not necessarily lyrically – though, it has its moments. Music-wise it is really dark but its dark in a light at the end of the tunnel perspective. It’s basically a mirror image of the current band’s mental and musical state, hence the title ‘Aesthetic Of Transgression’ which translates into something along the lines of how we look as we transform and emerge so differently from how we entered both the initial writing process and recording. It sounds pretentious but the title was totally spur of the moment. I wrote it down and just looking at it how it looked on the piece of paper it immediately forged an idea of how the album would play out. I put the idea forward to FR then Psy. It was initially a concept album of sorts due to the feelings and content I felt I needed to explore in order to clear my head.

FR] This album to me is about going beyond, finding hope in adversity and  exploring  what it means to be a human being struggling to find meaning in a world gone mad. Lyrically some of the tracks, including ‘Consequence’ is about my own personal conflict between my faith and the struggles I have with myself and society. This album is about hope, but to find our hope we first have to face who and what we are, and that is what this album means.

PS] This album is completely different from what I normally do ( but then again who defines normal), when I first started with the band in mid-2008 I felt that it wasn’t something that I really wanted to do, I felt that there was more lacking than what I could add to the band and so I made the decision to leave the band. I rejoined the band in April this year and I think that the band has grown a lot and I now feel that what I add and my IDM background has brought a new perspective to the music we make. As for the lyrical concepts that FRequency pulls out his hat I still have no f***ing idea but its still totally awesome and works.

S] If you could re-create the soundtrack to any existing film, what film would you pick and why?

TI] There’s way too many movies to choose from. We could be clichéd and say something like ‘Blade Runner‘, ‘Terminator‘, ‘Event Horizon’ or any of the ‘Alien’ films. There is however, something cool about 80s schlock horror films such as ‘Re-Animator‘, ‘Eraserhead’, ‘Scanners’ and ‘Evil Dead’ (1+2) that we think could do with some Industrialisation. Sampling of said films worked for Skinny Puppy so why not do the reverse and make music for the films?