For our next Reverbnation spotlight, we check out South African band Volume Conflict and speak to vocalist Triston Smith about the alt-grunge band’s influences and ideas. 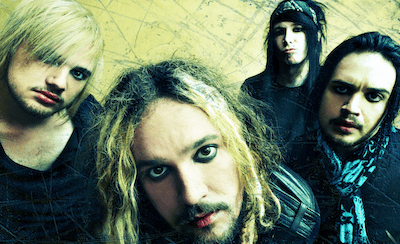 T] “We are a very open band getting influence from almost any and every genre or person that tries to create a piece of work from-out that ‘elusive’ concept of connecting to where it is that a ‘true’ sense of inspiration comes from. That, fundamentally is the hardest for any type of artist to tap into and you can almost hear if the work is being true to that or not from the very first listen. Although an alternative to the rock and grunge genre are probably our main drawing card, and in many ways by coming from the big love we have for the grunge era and the 90s Seattle scene with its simplistic, very emotional and energetic approach it does seem to be worth a subsequent mention that we do try to keep as true to that form in our personal aim to be as honest as we can in our music too.”

T] “Anything and everything from seeing something at a stop on tour, to sitting alone in a room with a lit candle and staring at the ceiling. Just as long as the song that comes out is original and honest. Then you know you will be able to tour the song for six months at a time and not get sick of it while all at the same time being as honest to your audience as you possibly can be no matter how good or bad the show is. Everyone hates a fake and can instantly tell when it’s not real anymore. That, and also it puts you in the situation of having a ‘real’ and tangible place to go to in your mind when things get tiring without having to sing ‘ooo baby baby’ all of the time.”

T] “All of them in some sort of way. Although, we make it a big rule of thumb to stay as far away as we humanly can to songs sounding the same, it must be said that there are a definitive underlying ‘sound’ throughout our whole setlist. But to put a number on it, it would probably have to be ‘Forsaken’ which will be out early 2013. That one is worth a mention only due to the fact that we are very excited to get into the recording of it, and that song perfectly sums up our attempt to fuse melodic structure, powerful play; it’s dynamic.”

T] “For as long as we can remember one of our biggest dreams have been to tour Great Britain and with things looking better than ever for our band, a visit to your shores is becoming a big reality. Please come out to support when that happens, because another very big reality awaits us if you don’t and that will be the possibility of having to swim back home!”

T] “Financially we have always been a band walking ‘the long hard road’, but have come out the other end stronger for it. Although to get some sponsors to be able to start touring internationally would be of big importance to us and we have set up a Volume Conflict donation box on our website, for just that reason. At this point of our careers we really want to get on a plane ride to bigger playing fields. Not that our homeland doesn’t facilitate that, it’s just so heartbreaking some days how much talent and potential there is over here that doesn’t get support. Sadly beyond all the talk of art and the making of it, at the end of the day you have to eat too, and the scene here just does not always allow for that.”

T] “Getting the message out there that alternative music is not dead by any means or fashion what so ever, no matter what modern media wants to tell us. Just because they don’t like promoting it, doesn’t mean it’s not there. You can get a very real example of this by just going on the net and streaming the ocean of independent radio stations in the world and the colossal wealth of talent circulating this globe of ours. That, and definitely hitting as many local venues and festival stages as we humanly can, be it local or international.”