In our latest spotlight, we have the pleasure of chatting to Danny Trew Barton from one of our favourite York up-and-coming band’s, White Firs. He talks to us about the distinct sound, recording in a basement, and of course, plans for the future! 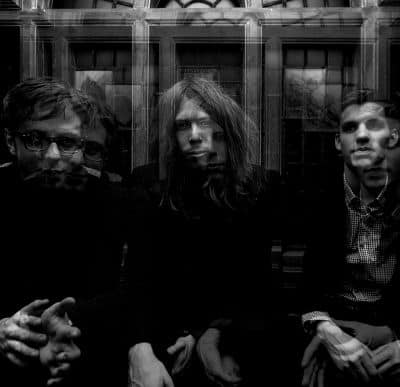 S] We think the White Firs have a pretty unique sound; what kinds of bands have influenced this style?

DTB] “Across the board really: I’d say a lot of sixties garage is nestled quite nicely in our collections, early rhythm and blues, especially Chicago, Muddy Waters, though a lot of modern Americana such as Jeff Tweedy [Wilco] and Tim Rutilli [Califone] has also spurred the more intricate parts of our sound along with Eels, Grandaddy, and Brendan Benson. A lot of southern sixties pop like The Box Tops and Big Star: basically Alex Chilton for song-writing. I’d like to think Dan Penn and Spooner Oldham meets the noise of My Bloody Valentine is what we’re going for.”

S] How did you find recording in the basement of Bar Lane Studios?

DTB] “The bare bricks and no windows definitely suited us. It’s a bit of a hidden gem. Dom [Berry] from Sea Records brought down his 8-track with a selection of battered microphones: we set up our gear and basically hit record. The intimate setting definitely helped us capture a real raw, energetic sound that we wanted as we’d gigged quite a bit after the first record was recorded. In fact I don’t think we’d played live before we recorded ‘In My Way’, so the live sound had a lot to do with that. Currently, we’re just in the final stages of mixing, with the view to releasing a four track 12“ record early new year. We’re buzzed!”

S] How do you reflect on your time working with The Federals?

DTB] “The Federals was good, but we were all pretty burnt out by the demise. I went off to Europe to tour with Jonjo Feather for a while, and people moved away. We’re all still in touch though and there seems to be quite a lot of interest in America with our publisher.”

DTB] “I’d say it’s still at the root of everything, me and Jack have played in bands since we were 14. It’s always gonna shine behind, I reckon.”

S] How do you find working with your record label Sea Records?

DTB] “Honoured! Dom and Joe [Coates] are two of the best, and coolest, people we know. It’s nice to be with people who sacrifice their lives for the same thing. Joe’s put on great gigs with Please Please You from since I can remember meeting him in Track Records, and Ambulance [Dom’s band] were always an inspiration. We’re very happy!”

S] Debut single ‘In My Way’ was produced by White Firs’ own bassist James Barton. Are there any producers out there that you’d love to work with or is producing your own music an important part of the White Firs’ sound?

DTB] “I’d say control over production is the key to us. The sound is as important an art form as the song to me: both drive each other – though working with Dom was just as inspiring. I see it as two sides of the velcro, rough and smooth. I couldn’t work with anyone outside our musical family.”

S] White Firs have been described by One&Other magazine as the answer to what the UK music scene needs; do you think there are any other new bands out there to look out for?

DTB] “Jonjo Feather! We’re all digging the new Tame Impala album, that and Ben Kweller. Muttley’s new album is also definitely worth grabbing – me and Jack use to play in his band Burning Fences, which was an experience. Fawn Spots are good fun as well, looking forward to their new release – which Dom also recorded – and Dom’s new album which so far sounds great; very Neu! influenced. He’s done it all in this basement where wife’s would go to have out of marriage babies in the 30s. Ace!”

S] We notice the single ‘In My Way’ has been released in Japan under Flake Records. What kind of a reception have the White Firs received over there?

DTB] “They seem to dig the track which is nice… though we’re pretty nonplussed on the finer details. We’d love to go over there obviously: they dig their garage music, and their whiskey.”

S] What else are you working on at the moment, and are there any plans to tour in 2013?

DTB] “We’ve mainly concentrated on the recording side of things this year so we definitely hope to tour extensively in 2013. There are already plenty of shows in the pipeline, including festivals, and some European dates in the summer. We are currently in the process of finishing off our next single too, which we hope to release on 7″ around February/March time, produced again in Liverpool by my brother… also precluded by the EP with Dom, which will be out early new year on 12”, all released by Sea.”

S] What would you ultimately envision for the far future of White Firs?

DTB] “More records, more touring, and more writing. We have an album written and ready.”

Good to see good bands getting some coverage!!