For our latest spotlight interview, we chat to Elliot Vernon, the man behind Hull-based folk-metal act Windrider (and Alestorm’s live keyboardist…yeah, we probably shouldn’t forget that?), about starting out, making music and staying inspired. 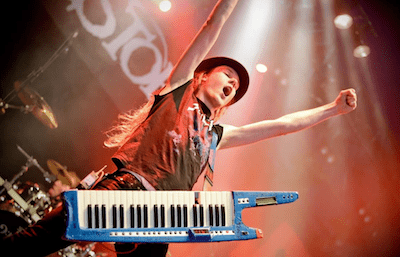 “When I was 12, the keyboard was uncool”

S] You’re in quite a few bands – what’s a typical day like for you at the moment?

EV] “Well, it might appear that way, but the majority of them are just studio projects consisting of just myself. Since I’m lucky enough for my ‘job’ to be playing with Alestorm (or unlucky that it means I don’t have time to get a real job) my days are pretty lazy, when I’m not at university. But since you’re probably looking for a musical answer, I spend most of my time in my little recording studio on the computer, with all of my instruments within arm’s reach – that’s probably why I have so many different little projects, because I’m always able to just record any ideas I have straight away.”

S] How did your musical journey begin?

EV] “I seem to remember it being something to do with my dad having a keyboard at home when I was very young. I don’t think he’d ever really taken that much time to actually learn to play it, but I used to enjoy messing about and learning things by ear. Eventually I started violin lessons at school which introduced me to the world of music theory, and then I started keyboard lessons at home too. When I was about 12, I decided keyboard and violin were very uncool and started to play the guitar instead.”

S] What things, people and places keep you inspired and motivated to make music?

EV] “My honest answer would be that music keeps me inspired to make music. Of course I see the beauty in nature and in people, and these are always good places to draw lyrical inspiration from, but I have always been much more attuned to the musical side of things. Film scores, bands, even just a new guitar tone or keyboard patch can inspire me to write something new or begin a new project – inspiration comes from everywhere, I suppose.”

S] How have your inspirations been different through your work with Windrider and Ravenage?

EV] “Well, Windrider was initially just a side-project of Ravenage – something I started recording during a quiet period at the end of 2008 when we weren’t playing any shows. Of course, now Windrider has become an active band but really the inspirations are pretty similar – the two are of a very similar genre. The only difference in inspiration or influence really would be that Glyn [Beasley – vocals, Ravenage] handles all of the lyric writing and the vocal side of things, so I’m left to concentrate a lot more on the music, and even then, I quite often write with the other members of the band. With Windrider, I get to have full control over everything, so I’d probably say I take a much more universal approach to the songwriting and consider all of the instruments at once.”

S] What inspires a track like Windrider’s ‘A Warrior’s Tale’?

EV] “Musically, it was probably the first time I decided to make brass the key instruments in the melodies and themes of a song. It’s pretty much a rip-off of John Williams’ ‘Superman’ theme, anyway. But lyrically it’s just another of your typical Viking-metal stories about a warrior, but with the story being told by an old man around a fire. I suppose that song became the title track of the EP because lyrically it’s the centrepiece for everything else on the record, and musically it’s perhaps the most anthemic and memorable in terms of melody.”

S] You have a very strong voice – can you think back to the first time that you sung, and found your voice – where were you?

EV] “Well I’d always liked singing as a young child, and I was forced to be in the school choir because I played an instrument. But the first time I attempted ‘extreme’ vocals was around aged 15/16 when I’d go to a nightclub which ran a weekly metal event for teenagers – I’d just sing along and wear my throat out, and somehow five years later that ended up in something of a talent for death and black metal vocals.”

S] How did you get involved with Alestorm?

EV] “The Alestorm bassist Gareth Murdock used to play in a band called Waylander, who did a small tour of the UK in 2008 with Ravenage. We remained friends, and when Gazz joined Alestorm he must have showed Windrider to Chris (Bowes, Alestorm frontman). Gazz ended up playing bass at the first Windrider show in 2009, and I got talking to Chris on the internet because he was a fan of my music. Anyway, in about May 2011, Chris asked me if I’d like to come on tour with them later in the year, because they thought their live show could be improved with another keyboard player. Apparently I was the obvious choice, but I don’t know why – there are tonnes of better keyboard players! [laughs]”

S] Do you have a favourite memory of being on tour with that band?

EV] Ah! There are loads of good memories, and I’m sure there were a lot of great potential memories that I managed to obliterate with alcohol. Everything I can think of is far too stupid to even attempt to put into words, and no doubt nobody would find them funny anyway. I did, however, create a feature-length tour video of our UK headlining tour earlier this year. It’s called ‘Useless Trunting Nerds’ and it’s on YouTube, check it out!”

S] You’re heavily involved in the music scene around Hull – what do you think of it?

EV] “I wish I could say that were true, but it’s probably not. I very rarely go out to local shows, and I know that’s terrible of me. The local metal scene has been taking something of a beating recently in terms of its reputation – poor attendances, etc. A friend of mine hit the nail on the head when she said the problem is that practically everyone into metal in Hull is already in a band. From what I can see, people are either too busy playing their own shows to go to anyone else’s, or they see it as a personal insult that their band wasn’t invited to play and don’t bother turning up.”

S] Does Hull inspire your music at all?

EV] “My music and lyrics have never been particularly heartfelt in any sense, so I’ve never really had much scope for anything local in there. However, I did recently start writing some music based around the local historic maritime and whaling industry of the city – that project is called Whalebone.”

S] What other bands from the area are worth checking out, and why?

EV] “As I said earlier, I’m not the biggest expert on the local scene by any means, but from what I’ve seen recently, the two local bands that show the most promise are Infernal Creation and Pastel Jack. I’d hate to insult anybody and I’m sure there are some gems I’m not aware of, but most bands around here should probably spend a bit more time in the rehearsal room.”

S] You’re pretty active on social media like Facebook, posting rehearsal videos and such for both Windrider and Alestorm, how important do you think this stuff is to a musician nowadays?

EV] “I think it’s very important, but only when used as a supplement. Especially where Alestorm is concerned, it offers a unique look into what we get up to away from the stage, and entertains people beyond the music. It’s the digital equivalent of that. We always go out and get drunk with the fans at festivals and be friendly, sharing more with fans is always going to be more memorable, and that can only be a good thing. However I do think it gives people an opportunity to be lazy: all of these little promoters that think you can put on a successful event by posting about it on Facebook once a day should probably invest some money and go hand out some flyers.”

S] What’s your advice to other musicians around East Yorkshire if they want to achieve success?

EV] “My advice to anyone who wants to be successful with music is just to listen. Not just for musicians, but sound engineers and producers etcetera. Too many people, especially in bands, spend far too much time doing stuff; writing loads of songs and making loads of noise, and a lot of it is terrible. Next time you watch a movie listen to the music, and next time you listen to a CD you like, really listen to it and think about why you like it so much. If you really want to be taken seriously, think about what you want to do before doing it, and don’t share it with the world until you think it’s ready.

S] What are your plans with regards to future releases in 2012?

EV] “I do have parts of a Windrider album written, but that’s not going to be out this year. I have a blackened-thrash project called Zombiewizard that will probably see an EP release this year, and also some silly stuff that I’ll be working on with Chris from Alestorm. Come along to one of the shows on our [Alestorm’s] UK tour with Dragonforce and you’ll probably be able to buy a stupid CD!”