The Defiled are one of the most intense and diverse metal acts on the UK scene currently, mixing electronic influences with the raw edge of hardcore music and a strong punk attitude. When we last spoke to vocalist Stitch D the band were about to release their ‘1888‘ EP, and now, prior to unleashing ‘Grave Times‘ in the New Year, we chat with keyboardist The AvD about the new album and new plans. 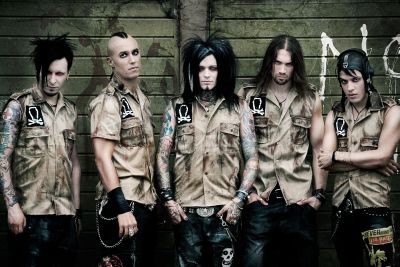 “We are infatuated with our music”

S] What can we expect from The Defiled next year?

The AvD] We are obviously touring right now and we will be releasing a remix EP of ‘1888‘ just before Christmas and then we’re unleashing our album called ‘Grave Times‘ with more touring to follow, no doubt.

S] How have your aims and goals with regard to the project changed over the last year?

The AvD] The aims and goals have always been the same and always will be. We are 100 per cent dedicated and infatuated with what we are doing and cannot wait to get out there and make it happen.

S] How are you expanding sonically from the industrial metal-style of ‘I888’?

The AvD] It’s just a lot bigger and ‘meatier’ with elements that I think will blow the fu***ng roof off of anywhere that we play. We are very proud of what we have done on this one.

S] Is there a major theme continuing on from the ideas of the EP?

The AvD] No. We toyed with the idea but felt it would be too restricting to go down that route again. I guess, If you are looking for a theme It would be all about death and graves! [laughs]

S] When we last spoke to the band, you had a very positive view on getting out of London and playing up north, after playing more shows in Manchester, Leeds and Sheffield does this view still hold true?

The AvD] It’s amazing to play anywhere really, but it seems the northern boys and girls are up for it more. They are nuts in Newcastle for sure! I think we are all a bit spoilt for choice in London.

S] We also spoke about the numerous possibilities with stage-lighting and the visual and theatrical representation of The Defiled – how will this be expanding in the future?

The AvD] We would definitely love to do a lot of that and probably will get on it as soon as we can. We have been so busy with getting remixes, videos and and albums done we haven’t had a second! We are thinking of many different ideas and scenarios which we are going to make come to life so keep your eye out.

S] Is there a new song that you are working on that you feel defines the state of The Defiled right now?

The AvD] ‘Call To Arms‘ is going to be the first single off of the album, I call it the ‘swiss army knife’, It has everything I love about heavy metal music! Also, ‘Blood Sells‘ because it has some elements that we haven’t tried before, I’m just into the whole album right now to be honest!

S] Talk to us about the recording process – have there been some standout moments?

S] On the same note, what have been some of the biggest challenges for the band over the last year?

The AvD] [It was] definitely losing Drex [Exel] on bass, it was really hard to get it exactly right when replacing him. We had so many people come through and were getting really disheartened. But I think that Stitch and I didn’t want that to stop us, so we worked twice as hard on all aspects of the band, making plans for the future and setting dates to kick ourselves in the ass and keep the momentum going. We didn’t want just a bassist, we wanted the ultimate Defiled bassist. Fortunately, we finally found the perfect replacement in Vincent Hyde – he is a f****ng animal and it’s like he should have always been in this band!