Spotlight: We Could Be Astronauts

Home » Spotlight: We Could Be Astronauts

We Could Be Astronauts is the project born from out of the ashes of two of York’s most popular bands from the last decade, Idle Jack & The Big Sleep and Hijack Oscar. This group includes Dave Hartley (drums) and Mark Meilack (bass) of Hijack, and Rob Hughes (lead vocals) and Simon Himsworth (guitar and backing vocals) of Idle Jack, alongside for Blackwater Trio member Paul Heaney on lead guitar. Together they create organised chaos – a diverse fusion of jazz, blues and rock music that work well and will surely appeal to the alternative masses nationwide this year. We catch-up with the band before their debut show at The Duchess… 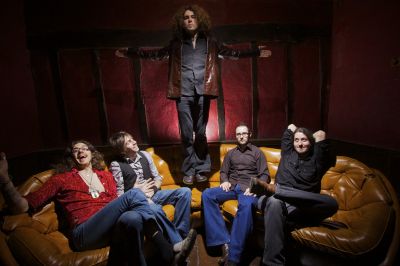 S] How did the band come together?

Mark] The nucleus of it was formed about one-year-and-a-half-ago when myself, Rob and Dave got together as a trio and started making music. We played at a house party, made a racket and we wanted to get into playing heavier music again after we all got sick of what we had been doing. We’ve always had an eye on each other anyway and so, it’s been easy because we were friends.

Dave] Hijack and Idle Jack split at roughly the same time, and we had a few meetings about getting the band together not long afterwards.

Simon] Rob approached me about joining the band after the meetings. I’ve always dabbled with playing guitar [Simon played drums in Idle Jack], and I contributed bits to the Big Sleep material, so it was a case of him simply calling me up and myself saying, ‘yes’.”

Mark] We got together and played a few tracks with another lead guitarist but it wasn’t sitting right – myself and Dave played in the Blackwater Trio with Paul and so, we got him involved and it all came together.

S] How did the name come about?

Dave] We couldn’t think of a name at the start, and it got to the point where we were asking people on Facebook to name the band for us. I think that it came to myself and Rob though, while we were drinking in the Evil Eye Lounge! It doesn’t really have a meaning, although it does feel like we are taking the pi** a little and referring to the fact that we could be much bigger and more famous, but we won’t be! [laughs]

Mark] My take on it is that the name harks back to childhood dreams and although most people don’t end up doing what they wanted to do when they were younger, we feel like we are finally making the music that we want to make.

S] How is working with this band different to your previous experiences?

Mark] I won’t say anything more other than, my previous experience was like living under Stalin and this is much more of a democracy.

Dave] I’m playing rock music again which is why I wanted to play drums in the first place. Hijack was very blues-orientated and I was never a fan of that genre. I’m a lot happier. I enjoyed doing what we did with Hijack in the early years, but this is much better.

Simon] I think that this is a collection of much more like-minded people who are into the same type of stuff. It’s easier. In our previous bands, everyone has had such different musical tastes an. for me, it felt like a constant negotiation. These songs sounds exactly how we want and and it comes naturally.

Paul] I enjoy not having the pressure of everyone in the band following me. In the last band I was in with Mark and Dave, I had to write all of the guitar parts. This time I can relax a bit more. I do have to actually learn what I am playing now though! I used to use alternate tunings which is a lot easier. Now people can tell when I have made a mistake!

S] What’s the writing process like with Mark in London and you guys in York?

Dave] Mark picks things up very quickly. Rob writes a lot of it along with Simon and the rest of us add on to that.

S] What’s the score with the tracks you have out at the moment?

Dave] They are old recordings. We are actually re-doing everything over the next few weeks.

S] Is there a song you are working on at the moment that you feel represents the state of the band right now?

Dave] The stuff we have recorded represents us well. We’ve not written anything new recently, but there are always ideas floating around. We’ve been concentrating on putting a set together so that we can start gigging.

Simon] There’s probably about 15 partly formed songs that we have between us and Rob is always coming up with new stuff. 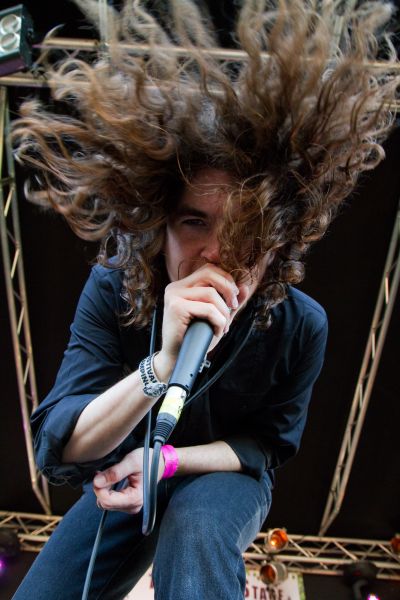 Dave] We’re trying to play out of York as much as possible. It’s not going to be easy because we need to live and we all have jobs and other commitments. It is very easy to do the York circuit, but we are chasing up more gigs elsewhere. We’ve all been doing this for long enough to know where the pitfalls are and what we can do in order to better ourselves as a band – we are just focusing on doing that.

S] Are you planning on releasing some material?

Dave] We will be releasing something but whether that is going to be an EP or an album we haven’t decided yet because we’ve got so many tracks.

S] What’s your attitude towards York as a scene?

Rob] There’s something in the water here – everyone is a musician and so everyone is playing at times when others are. So, not many of our friends who also play in bands come and see us perform. It’s a tourist town so people are always busy with something!

Paul] I only got into the music scene in York two-years-ago. Everyone knows each other and you get different cliques of musicians and I think that because each one has been here for such a long time it becomes a very comfortable place where people play a lot. Fans of local bands will go and see a band once and think that it is great but because they will be playing again the same week at either The Duchess, Fibbers, The Basement or Stereo, that fan won’t come again. Our idea is to not follow that, so that people really want to see us when we perform here.

Simon] I have played in bands in lots of different places and York feels different to other places that I have been involved in. There’s much more creativity and originality. It feels like there is a scene and a community around music.

S] Would you like to make a similar impact and inspire with this band as you did in your previous outfits?

Dave] Not really! We’re doing this for us. This is a completely different band to Hijack and Idle Jack. We are just making music that we like, but we wouldn’t be doing it if we didn’t want it to have some effect on other people. We want people to get moving, and get as far away from the current blues music explosion that’s going on. We want to play rock! Where are the bands inspired by Rage Against The Machine? Those bands that have riffs that hook you in so that their audience can jump around and go mental? There isn’t that now. Everything’s very neat and tidy.

Rob] It doesn’t feel like we are carrying on from anything. It took a long time for me to be able to start from scratch and let things go. This feels new. It’s good drinking music and it will at least inspire people to have a Jager Bomb or two! We’re deliberately going to be recording our new material at the White Rooms all live because that way people can hear the energy. We’re trying to get that 70’s feel – if you listen to Led Zeppelin then you can hear that, and I think this band has so much energy and it will go on to inspire people. It’s been ‘a blast’ writing with this lot.

S] What does being a part of We Could Be Astronauts mean to you?

Simon] This feels like the band I should have always been in. If I can think back to the kind of music that I wanted to be playing when I was 16-or-17, this is the first opportunity I have had to play it.

Rob] It’s great to play this with these people. It is the kind of music I have always wanted to make.

Paul] I was terrified when I got the original recordings before I joined because I felt like I couldn’t play this type of stuff, even though I had always wanted to when I was younger. I listened to them constantly over a weekend, trying to figure them out by ear and fortunately, it all came together.

Dave] I agree. We just really enjoy doing this. 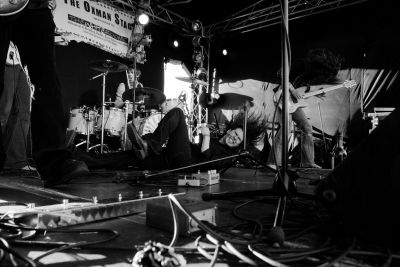 We Could Be Astronauts in 2011: Laurence DG Smith

We Could Be Astronauts live at Galtres Festival: Winston Sanders