For our latest artist spotlight, we chat to Who’s Driving? Bear’s Driving! guitarist A.J Grand-Scrutton about how the Essex-based pop-punk outfit have found their musical whirlwind journey since forming in 2009… 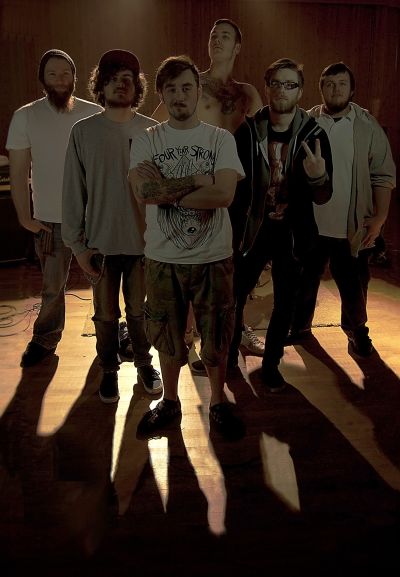 S] How have you found the transition from newbies in 2009 to where you are now?

A] “Wow! That’s probably one of the most interesting questions we’ve ever been asked in an interview, believe it or not! It’s so different now, when we started it was just a little hobby and more of a side project – now our whole lives revolve around. We have to schedule our work, spending time with our girlfriends, everything really around the band. In all honesty I’m not really sure how our partners put up with it most of the time [laughs]. We take it a lot more seriously nowadays. For ages we were travelling to gigs in my car – for a few of us and the gear, and the rest of the guys would have to get a lift with a friend, catch a bus or train to get to shows. Now we have the ‘Bear Bus’ and it makes such a difference. Song-writing-wise we spend a lot more time on it. Before we would get three quarters of a song that we liked and we would rush a section, usually a bridge or outro, just so the song would be finished. Now we tend to write the songs, record them fully in our studio, re-work them, re-write them and then start actually rehearsing them properly. We’re a lot more picky I guess you could say!” [laughs]

S] What can fans expect when they go to a WD?BD! gig?

A] “Fun. Yeah it’s cliché but it’s true. We’re very much of the opinion that it needs to be fun for everyone, we can guarantee you, we will always put on a hell of a show. Whether it’s playing to an empty room in the middle of nowhere or playing to a sold out home crowd – we always play it like a sold-out stadium show.”

S] What do you think is the best attitude for a band to have to progress in the music industry?

A] “Do it yourself. 100 per cent. If you or a friend can get something done, then do it yourselves. We have next to no money but we get top quality videos, publicity, merchandise and more because we have friends who are talented or we have the talent within the band to be able to do it ourselves. I would recommend any band does their own releases when they first start because speaking first hand, labels just add hassle to the situation.”

S] Would you say you were more pop or punk? Better yet, can you give a description of your sound?

A] “I think this is kind of what makes us like Marmite to a lot of people. At times we are very poppy and at other times we’re a bit closer to punk. We tend to just write what comes naturally. For example we’ve started work on our next EP and potential full-length. So far, we have around four definite keepers and they vary from a very mellow The Starting Line-style track to a-minute-and-a-half non-stop assault called ‘Bill F’N Murray’. So we like to keep it varied, some people see it as something for everyone and some people see it as ‘They’re just a band who can’t find their feet’. Either way most people seem to like what we do and we love doing it.”

S] Watching your videos you have a nice, relaxed, fun attitude. How do you find the balance between work and play, and to keeping a level head whilst still having a laugh?

A] “Well, thanks for taking the time to watch them first of all [laughs]. In a word, hard. There are times where one of us, usually me, will completely lose it but 95 per cent of the time we are just having fun and we laugh everything off. We work very hard to be well-rehearsed, and write songs we love and luckily for us we have a lot of fun while we do it. The hardest bit, like we said earlier, is balancing the personal life alongside the band.”

S] What was it like to play alongside bands such as Deaf Havana and The Wonder Years?

A] “We’ve had the honour of playing with some great bands in the short space we’ve been together. The DH show was great and those guys are doing well which is nice to see. The Wonder Years show was absolutely surreal. We got to hang out with the guys and have a BBQ before the show, then we rolled down to the venue and just played an absolutely ‘sick’ show. They are one of our all time favourite bands so playing with them after being together less than a year was a complete honour.”

S] Any highlights over these busy past few years you would care to share?

A] “The aforementioned BBQ and show with The Wonder Years, hearing our song played on the radio for the first time was great. Our video getting so much support from Scuzz has been amazing. But really for us, I think it was the hometown show at the end of the tour last year. The place was rammed and, hearing the kids singing the words back to our songs was untouchable.”

A] “Lots of good stuff! We’re touring in April all over the country with our best band friends Underline The Sky. Then in June we are doing a few dates in Scotland with the great Autumn In Disguise. Then the plan is that after the Scotland dates we go into hibernation [no pun intended] and work on finishing the writing of the new album, aiming to record it late Summer and have it out end of the year followed by another tour!”