It’s almost E3 [Editor’s note: It’s actually E3 right now as this is being published – sorry for the delay]! Easily the largest and arguably the most important gaming event of the year, E3 has every major gaming company sweating spinal fluid to bring first glimpses of their largest releases and most anticipated franchises. And even better, it’s less than a week away! This year’s event is shaping up to be confidently brilliant, in both the sheer quantity and thorough quality of the upcoming games. Sony, Microsoft and Nintendo are rumoured to have huge next-gen hardware to announce, and every major developer has countless, exciting, new reveals to show off for the first time, to literally millions of hungry, dribbling gamers. THQ are no exception, and as a precursor to the summer of epic updates and giant announcements, held a pre-E3 showcase in London to give us an insight into the games they are excited to release throughout 2012. We are attending the event with gusto, and as a result, get a fantastic first look at three of their largest franchises’ new instalments for this year. 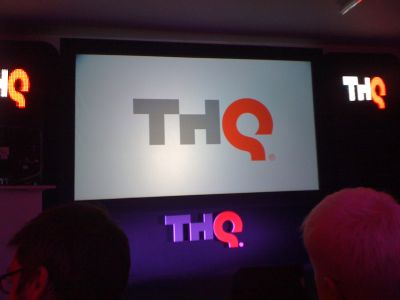 2012 is certainly shaping up to be a good year for THQ and, with a constant stream of quality on the horizon, is looking to only get better. Usually, THQ’s flagship franchises are constricted to movie or cartoon tie-ins (‘Ren & Stimpy’ on SNES, anyone?), combat-sport annual updates (WWE and MMA) and brilliant-yet-shortlived original series, ranging from Micro Maniacs to Red Faction. However, it appears as though their roster is becoming a lot more diverse and the publisher is expanding into newer, more varied areas. From games like the brilliantly dark, cult shooter ‘Metro 2033’, to the disturbingly beautiful ‘Darksiders’, to the huge announcement of a ‘South Park’ RPG; they have a lot of new titles to brag about. Unfortunately, three of THQ’s biggest 2012 releases are not shown to us, as we imagine they will want to reveal them to the world at E3, and we are disappointed not to hear anything about the newest addition to the WWE series ‘WWE 13’, the future direction of the frankly bizarre ‘Saints Row’, and any sign of an RPG featuring the ‘South Park’ cast. However, what we did see blew our minds out of our arses, so we can’t complain really. What we did see was ‘Company Of Heroes 2’, ‘Metro: Last Light’ and ‘Darksiders 2’.

The original ‘Company Of Heroes’ is roughly six years old, and generated a huge following with avid RTS fans for its tactical precision and complex gameplay, that forces the player to be creative and make bold decisions on the battlefield. Although the first game released two expansion packs as additional content, and the fan-base surrounding the original game is still massive, the sequel has been long-awaited, and looks every bit as fantastic as fans had hoped. The first game was known for its difficult scenarios, atmospheric style and absorbing gameplay, and ‘Company Of Heroes 2′ looks to continue all of these and combine them with a myriad of new features. The developers had one clear intention; to provide the gamer with a gritty insight into the mortality of World War 2, and develop an emotional bond with the troops at their, ahem, disposal, and this is present in the series’ newest addition by the bucket-load. 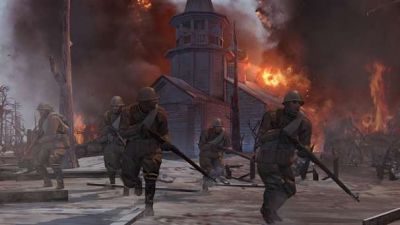 The new setting focuses on the eastern front, primarily the conflict between Germany and Russia, Stalin’s rise to power and the upheaval in Germany. From our insight into ‘Company Of Heroes 2’, it appears that research is a crucial factor to the developers at Relic, and authenticity rings throughout the game. The factions fight similarly to their real life counterparts; the Nazis are cold and precise, whereas the Russians are desperate and fight with numbers. As German forces push deeper into Russia, the player controls some of the less documented battles that actually account for some of the war’s greatest death tolls, which sounds like it will make for interesting gaming.

This grim insight into the mortality of war is exactly what Relic intended. The new Essence V3 engine, as well as looking astounding, is crucial to conveying the dark reality of war. Smoke fills rural towns, fire spreads realistically from rooftop to rooftop, and muzzle flare illuminates the dirt as soldiers charge forward across icy mud.

In respects to gameplay, there are plenty of new features to keep the experience fresh, whilst maintaining all of the depth of the original. Relic spokesman Quinn Duffy states that they wanted to create an experience that had more intense moments the player will remember, and it’s those moments that keep the gameplay fresh. These moments, of which there are apparently hundreds, are mixed in to every scenario, meaning that every play-through will yield completely different results. Some of the examples we saw are particularly brutal, and show how the momentum of a game can be changed completely, through skill, or blind luck. A platoon of Russian troops cautiously step forward through a small clearing, when they are pinned down by enemy fire. At this point, the gameplay switches to an in-game cutscene. As the Russians struggle to advance, their commanding officer yells retreat and the small squad move back towards a friendly blockade. However, as the Russian captain sees his men retreating, he orders his machine guns to cut into the squad, as punishment for their cowardice. In terms of a brief moment within a video-game, few others come close in terms of sheer brutality. It is fair to say that all of the depth, in terms of stylistic choices and influences that were apparent in the first game, are evident in the sequel, in abundance. 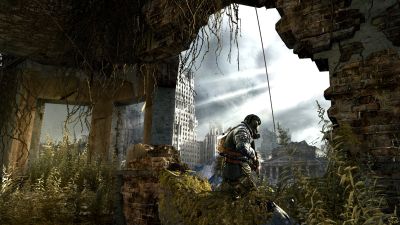 Honestly, one of the most intriguing and exciting reveals of the day, is ‘Metro: Last Light’. From the early media releases, it looks pant-moisteningly intense. With its incredibly dark style and spine-chilling story, it looks to create an atmosphere that is darker and scarier than Edgar Allen Poe’s basement. The first reveal, available to watch now online, was a live action, short film re-capping the backstory of the series’ main character Artyom, and an insight into the dark universe of Metro, based on the novel by Dmitri Glukhovsky. Basically, in 2013, a series of nuclear blasts wipe out the majority of mankind, save for a few groups of Russians who found cover from the blast in the subways of Moscow.

The storytelling was an important aspect of the first game, which had an amazing, addictive plot, and the short film was ideal at showing this. From the shock of huge blasts devastating the horizon, to the sheer emotion of a mother, sacrificing herself to preserve her son’s life, this trailer was notable on its own merit. In-game footage doesn’t disappoint either. The footage we see of a mission play-through gave us a look at the pacing, atmosphere and style of the sequel, as you continue Artyom’s story.

Not often does a game’s style so perfectly compliment its content, but in ‘Metro: Last Light’, it was hard not to be repulsed, paranoid and, to be fair, scared shitl***. Both the horrific game world, which is a post-apocalyptic nightmare combined with Russian folklore and the supernatural, and the way in which it is presented is constantly unnerving. As Artyom and his sidekick explore the ruined city 20 years after the bombs exploded, they realise why the surface is such a dangerous place, and reality and madness seem to blend in with each other.

There are some pretty terrifying moments as well. At one point, the duo explore a plane wreckage, and the player sees, through Artyom’s hallucinations, the crew and passengers casually enjoying their flight, moments before noticing the increasingly close mushroom cloud as it blows out the windows and drops the plane to the ground. It is raw, powerful, and such an intense moment, you have to pay attention to the details, no matter how grim they are.
From there, we saw gunfights with rat monsters, plagues of flying demons with dead-eyed decrepit faces and insects that cover the screen, as the protagonist desperately tries to sweep them off his gasmask visor.

The pacing is devastating, with moments of light-hearted relief being interrupted by un-ending terror as monsters attack at literally every opportunity, and huge set-pieces that amaze and induce vomit at the same time. The combat is bloody and desperate, and the setting, despite being more open than the original, is just as claustrophobic. As THQ release more information in the coming weeks, this is definitely a game to monitor as the “most terrifying” of 2012. 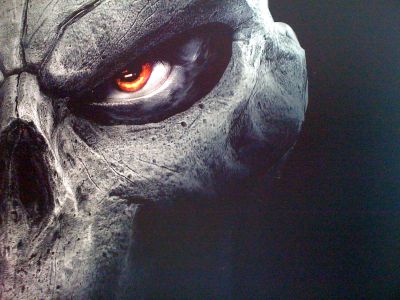 Finally, the game with which we spend the most time (and got to play for ourselves!) is ‘Darksiders 2’. At this point, mention has to be made to London-based graffiti artist Jim Rockwell, who spent the whole event creating an amazing piece to accompany the game, which encapsulated all the dark, powerful design and arcane style that the games contain. It was pretty breathtaking.

For those unfamiliar with the relatively new franchise, the story is loosely based around the myth of the Apocalypse, and more specifically, the Four Horsemen. The in-game universe they have created is a fascinating one, and the details which make it so intriguing are superbly implemented. The first game followed the first horseman War, who is deceived into bringing about the apocalypse prematurely. To prove his innocence to an ancient power called the Charred Council, he goes on a rampage against Hell and its stockpile of demons. Gamers who did play the original will know how much fun controlling War was, with fluid controls and brutal animations that paved the way for a great hack ‘n’ slash series. 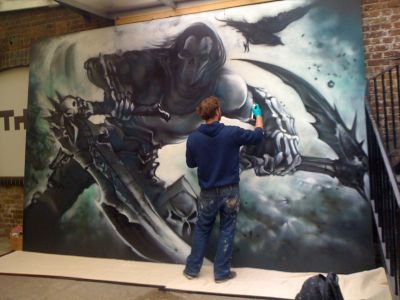 So how does the new game shape up? From our time playing, we saw how much of a difference is made by the new protagonist, the second horseman, Death. With a bad-ass style reminiscent of a steroid-addicted Grim Reaper, the combos are countless, the manoeuvres are brutal, and subsequently the combat is flawless. More often than not, action games have a tendency to rely on oversized opponents, clichéd boss fights and repetitive gameplay, but that is genuinely not the case with Darksiders 2. Borrowing heavily from other games like ‘God Of War’, the gameplay is a mix of extreme fights and old school platforming, which breaks up the action while allowing for some impressive moments. Among all these features that are, let’s say borrowed from other titles, somehow the end result is an awesome amalgamation of fantasy and action, storytelling and fast-paced gameplay. The game looks fantastic, plays smoothly, and looks to continue its epic story with more demon battering antics later this year.