In our latest event spotlight, we chat to Foundations Festival organiser, Adrian Thompson about his plans for the fest, and his goals for the future. 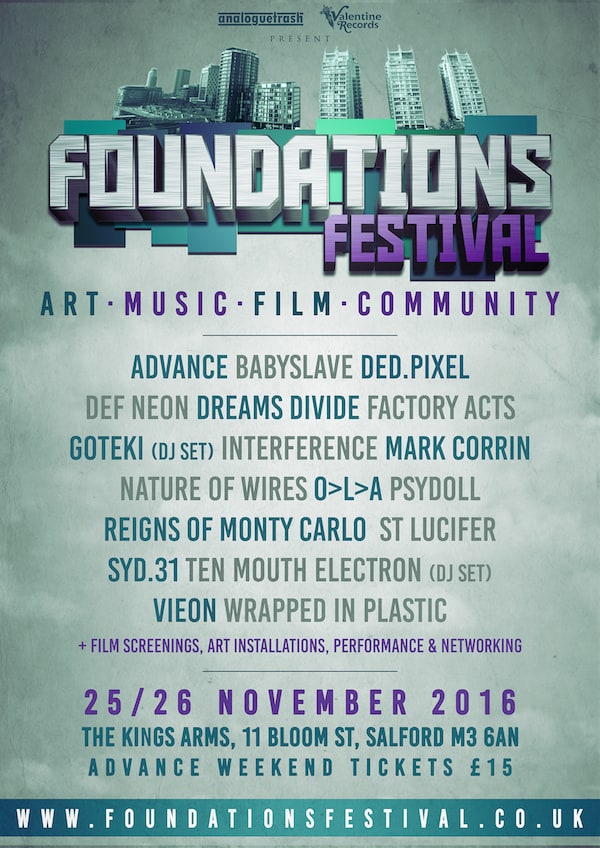 S] How did the idea form?

With this one, it was less a case of an ‘idea forming’ than something that just felt quite natural, inevitable really – We’ve been good friends with Valentine Records since we started AnalogueTrash and, while – musically we’re quite diverse there is very much a crossover of community, ideas and attitude – we’re both Manchester-based labels trying to do something different and fundamentally ‘outward looking’. What started out as a ‘let’s stick the best of both labels’ onto a single bill has rapidly evolved into a full weekend of art, music, film and community projects across three stages

S] What are your aims as we approach the first one?

I think with anything like this, there’s a case of wanting it to run smoothly and for people to enjoy it enough to justify a second one – Although we’ve all run large scale events before, this feels quite personal as we’re really putting ourselves out there as labels and trying to do something out of the box, so to speak!

S] Talk us through the selection process for the bands?

Although there will be several acts from the two labels performing, we were very determined for this to not just appear like a closed group – We therefore reached out to likeminds like the superb Wrapped In Plastic [from Birmingham] as well as getting O>L>A – who are, arguably one of the most exciting unsigned acts in Manchester at the moment on the bill. Japanese ‘Electro Manga Rock’ band PSYDOLL are also performing as part of their UK tour – which we’re all pretty excited about – while several of our ‘own’ bands are viewing this as an opportunity to raise their game in front of both a home crowd AND a new audience

S] How did the collaboration with Valentine Records come about?

As I say, it’s really a case of having known John and David for some time – we also distribute our stock locally through the brilliant Soundwaves Here We Come record shop and they’ve been running unique and brilliant events in Manchester for many years – I think the idea of collaboration and building a creative community is massively important to both of us so it just seemed like an obvious ‘next step’ to do something like this

S] What are your hopes for its future?

Well, at the moment we’re trying not to think too much about Foundations 2017 – just focusing on getting this one right! but yes, David and I have already had some tentative conversations about how we might like to expand things and (literally) build on the, er ‘foundations’ of the first one. Ultimately we’d like to see this expand to include the best of Greater Manchester’s independent labels and the inter-connected web of artists/musicians/visual artists and curators that exist around them

S] What are the main challenges of pulling this together?

Logistics, money and time – but we’re used to that and are all very ‘invested’ in this from the point of view of wanting to do it properly and in such a way that reflects positively on both labels and the artists we’re showcasing

In that sense, it was a conscious decision to brand this as a ‘micro-festival’ – in that we wanted to focus on quality over quantity – yet keeping it within a self-imposed budget that would enable us to price the tickets down – I mean, where else can you get this much cutting edge music, art, film and participation for a mere £15? Think of it as our gift to the city!